New to the Art & Craft Centre

Hiya. I haven't posted for a while - partly because the DGBVintage site has been very busy (hooray!) - but also because unfortunately I haven't been feeling much like making bears lately.

It's weird the way it works: when I'm answering emails, doing paperwork, writing for the website, arranging advertising, stuff like that, I get to the end of the day and I can count the number of jobs I've done - I feel like I've worked really hard. With bear-making though, it can take days before I actually finish something - even working flat out - and can sit back and feel pleased with myself. In between those times, I get to the end of the day, look at my partially-made bear, and feel really lazy like I haven't been working hard enough. And every so often, I get a bear whose design goes terribly wrong, and that feels awful!

Despite the lack of anything new at BigFeetBears though, somebody has been busy!

I don't think I've ever mentioned here that I rent shelf space in my unit at the Art & Craft Centre to Valerie Noy - a lovely lady who makes mini bears. Well, I have recently rented another shelf out.

A friend found a very handsome teddy bear at a car boot sale, and rescued him, and passed him on to me. He had the maker's name and location on his 'tush tag', and because she was so local to me, I looked her up and sent her an email, asking her about her bears. Her name is Sue Gibson, and she got back to me, saying that she doesn't make many bears nowadays - more often, she actually makes dolls. We got talking and eventually I offered her some shelf space.

I do love the style of dolls that she makes. I used to be a fan of traditional, pretty-pretty porcelain dolls, and I bought a few at one time. I'm afraid I came to rather dislike them though - they're just too... too pretty in a bland, conventional way. My mother once went in to put something in the Unit, and there were two old ladies discussing the bears. My mother introduced herself, and at some point in the conversation, one of them said to her, "She does like ugly things, doesn't she!"

I understand where she was coming from - even if it wasn't the most tactful thing to say(!) I have always consciously tried to avoid making 'pretty' bears, in favour of more goofy, intelligent-looking, interesting characters.

Anyway, what I was going to say was that the style of doll that Sue makes appeals to me because it's not attractive in the traditional sense. In fact, they can look rather gargoyle-like. They tend to have quite flat faces, and large noses, with big, vivid eyes and mouths. They are almost cartoon-like. The best one I ever saw was at a bears & dolls fair, run by Bobby's bears at a venue near Bolton. It was a little fat thing, wearing a black basque, satin knickers and fishnet stockings - the perfect mascot for DGBVintage!

I was so close to buying it - literally, I had the money in my hand, and I was getting that jittery feeling that always comes when I'm about to spend a lot of money. I picked the doll up to take a closer look, and my interest died a sudden death. I was disenchanted by the fact that it weighed barely anything at all. I have gotten used to the prevailing custom of putting steel shot in collectible teddy bears. I guess they just seem to have more realism if they're heavy. Somehow, this doll was so lightweight, it felt like a child's toy when I picked it up.

Sue accepted my offer of a shelf, and about a month later we met at the Centre to arrange her dolls. I was just a tiny bit taken aback by the naked mermaid, I admit! I do rather like her though, and she causes much smiling and comment from customers, which is always nice to see. 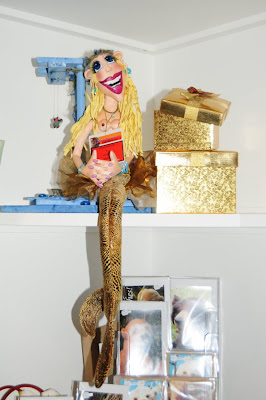 Sue had also made a collection of fridge magnets and keyrings - the idea being I guess, as with me, to have something less expensive that people are more likely to buy on the spur of the moment. They are made from the faces of the dolls. I have posted some pictures below. Love the Tina Turner hair of the first one, and the big, bead earrings of both the first and the second ones. They look very 1980s - but in a good way! 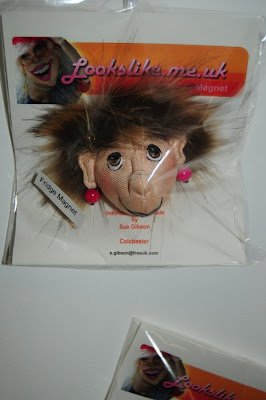 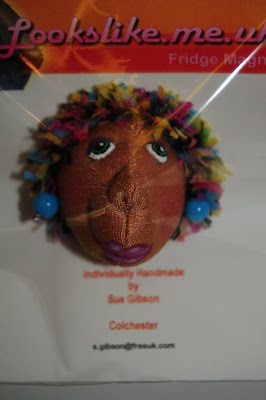 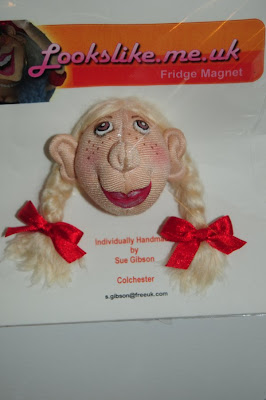 It's a trial run - we'll see how it goes. I have not added them to the BigFeetBears website, but if anyone is interested in any of the items shown, do get in touch.
Posted by Ruth at 00:41