I have updated the DGBVintage site again.

It's funny: good joblots are in short supply at the moment. The Ebay search results are filled with listing for "HUGE" lots made up of four items, or cutter lots, or those listings where there's a good number of items but they show four pictures and say "this is an example of what you will get" - so you have no idea exactly what you're bidding on.

Then there's the person who's been trying, for the past couple of months, to sell a joblot of about 500 pieces - for several thousand pounds. Again, four pictures, and from those you can assume its all cheap 1980s poly satin. Not that I'm not very fond of 1980s fashion - particularly the lingerie - but for such a high asking price, you'd expect something a wee bit special. And more photographs. And more detailed descriptions.

I did get a cracker of a lot recently (for an extortionate price!). The first and the last pictures below are from that lot. It was one of those lots which - although not huge (about 30 pieces) - it had some really unusual items. So, maybe worth paying over the odds for(?)

Anyway, a brief rundown of a few of the items I've just listed... 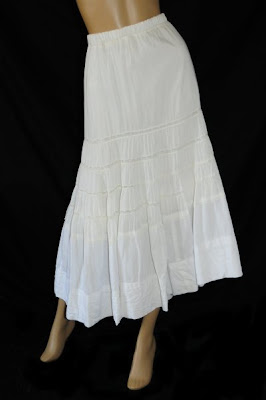 White cotton petticoat - once a flimsy knee-length thing apparently - but altered by a previous owner, so it now has an under-skirt and a section added to the hemline to make it ankle-length. It is a wonderful item(!) and it would make a lovely skirt. There are small things wrong with it - no marks, but a few stitches out of place. The previous owner apparently wasn't a professional seamstress - just a very enterprising individual who did a great job. Upcycling at its best! 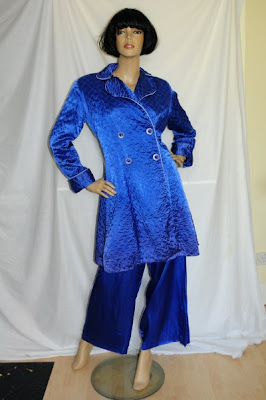 This is actually a 1940s loungewear outfit. The trousers are gorgeous - high-waist, wide legs, made from rayon satin. The jacket is quite unusual. I haven't seen anything similar. The fitting to the waist and the flare to the 'skirt' is much more pronounced than any of the jackets or house coats I have seen. A New Look item? 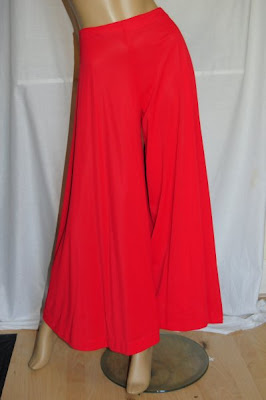 The most amazing flared nylon lounge trousers. They are almost culottes, but probably more fitted around the rear. 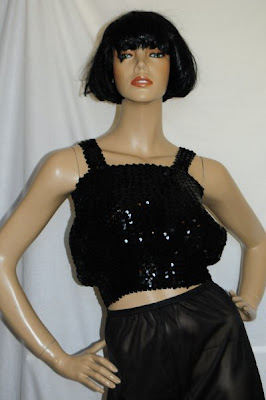 This is a short, black top - entirely covered in sequins. It looks a bit 1980s, but I think its actually much older than that. Also, it may be hand-made. The construction is very basic - it is very blousy both front and back, so it doesn't seem to matter which way round you wear it. Also, the straps are a bit short, so the top tucks right into the armpit.

Tis still a stunner though - its the impact of so many sequins on one garment, I think.

Anyway, as I was saying before, nice joblots have been in short supply, so I have been buying pieces individually recently. It is more expensive that way, but - on the other hand - I have a lot more control over what I'm buying. When I get a joblot, there's always a certain proportion of stuff which is not saleable, for some reason or another - either the condition is poor or the quality is. Buying bits individually gets rid of that problem. Hopefully they will tide me over until the next wave of joblots arrives.
Posted by Ruth at 17:47