This is the new - currently unnamed - bear; the floppy, drapey bear that I talked about in my last post.

The design is completely new to me. Does it work? I really have no idea! I will wait and find out what the customers think. 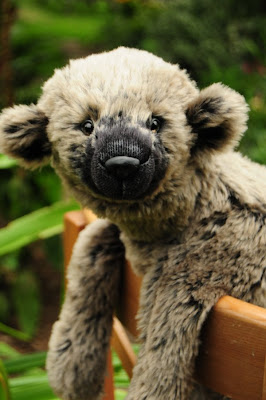 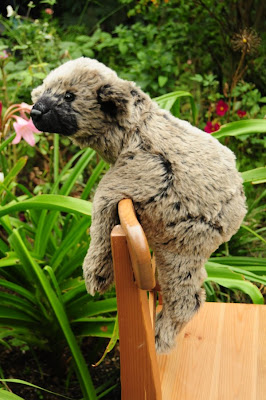 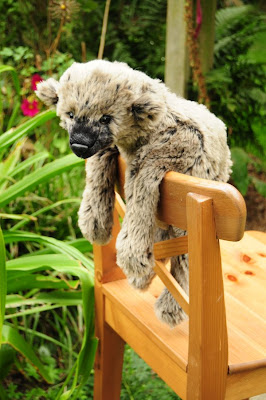 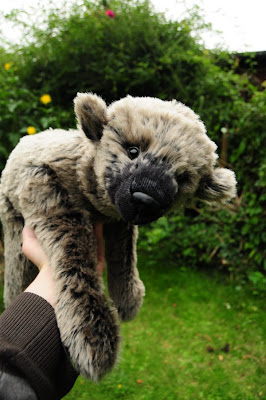 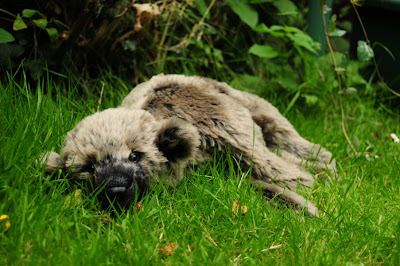 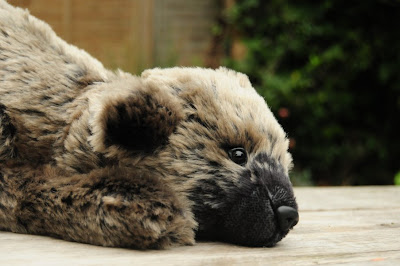 His arms and legs are unjointed - they are simply sewn on to the body. They have steel shot in the ends, so he drapes well, and the top of each limb is actually not stuffed at all. When I did a practice run of the pattern, I did stuff them, but when I made this one I kind of liked the fact that the limbs flowed from the body - rather than looking like they had been stuck on the outside.

There are a couple of down sides to the idea though. Heavy, shot-filled limbs hand-sewn onto the body? Well, they're certainly not going to drop off, but the added weight will put more strain on the stitching, and if he's bought by someone who continually picks him up by a single limb, I'm not sure how durable the stitching is going to be.

In addition to this, when I went to sew the limbs into place, I had to decide which position to sew them in. Because I was looking for a bear to drape over the back of an armchair, I sewed the limbs on in accordance with that pose. If you try to sit him up on his bottom therefore, the limbs are not correctly placed, and the fabric wrinkles and sags.

The good news is though, that he would make a great pyjama case! I once saw an antique Farnell teddy bear pyjama case on Ebay. It was lovely, but the design was rather strange. The bear lay on his stomach, but only had a single neck joint - so his head was never actually upright. His arms and legs were jointed out sideways, and on one side they were not full-length but just little stumps - the idea being that the stumps would prop him up on one side, so he wasn't flat on his face.

I wanted to have a go at making one; my problem was that when you joint the limbs, the inside of the bear is very untidy. With the nut and bolt joints I use, you have the ends of the bolts in the bears stomach. Even using plastic safety joints, it still wouldn't be right. In this bear though, with the limbs sewn on the outside, the inside could be used as a pyjama case. I just need to line it, and put a zip in the back.

7. Three rag dolls, dressed for the kitchen, bedroom and bathroom.

I have my own design for a rag doll, so I was thinking of giving it a go. Interior decorations sell quite well at the art & craft centre, and I thought that these rag dolls would sort of straddle the line between teddy bears and interiors.