I seem to have been obsessing over gift tags recently - I guess its the only really small cheap thing I can think of to make and sell in the unit. Bear in mind (tee hee!) that I can't stray into any 'genre' covered by another stall holder.

Plus, I have had flu, or some such thing, recently so I have been feeling horrible. One gift tag is about as creative as I get when I'm ill! I have been thinking about how to make a teddy bear gift tag for a while. It has to be as quick as possible to make whilst, at the same time, being intricate enough that people don't just look at it and think 'well I could make that myself - easily". 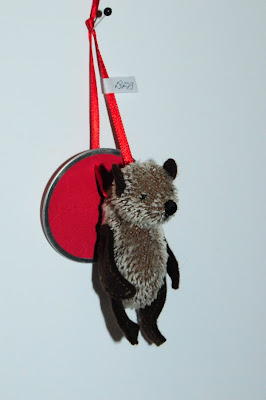 I'm sure anyone could make this themselves. The question is, would they bother? I am putting him on sale for £4. I have not worked out how long he took to make, but - simple as he is - he did take a while. Would anyone take so long over a gift tag? Should I be taking so long over a gift tag? I shall try making some more tomorrow, and perhaps time myself.

My order of teddy bears joints has not yet arrived, so I still haven't managed to complete my second long-legged bear yet. Hopefully tomorrow. Also, my mother has taken up painting again recently! It is something she is good at but never really has time to do. For some reason she has got the bit between her teeth again - so I now have some new greetings cards, handpainted in acrylics. I won't show the first lot, since they're all sealed up in plastic now, and will be difficult to photograph - but look out for the next ones!
Posted by Ruth at 21:31