This is he - the last bear I'll make before Christmas, and the last Christmas present sorted. His name is Llewelyn!

He is made from the same pattern as Cordelia (see here), but with a nod towards realism. The pattern is a bit amurgurumi, but the black with the pale muzzle and brown paw pads is the kind of combination I would use for realistic bears. Now, if only I could use an airbrush... 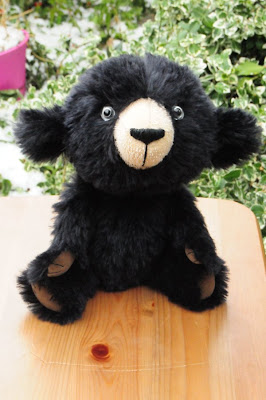 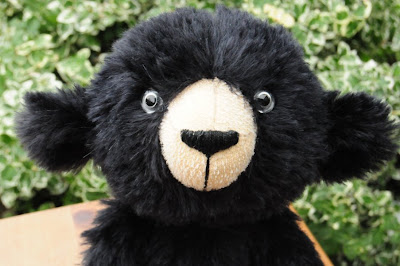 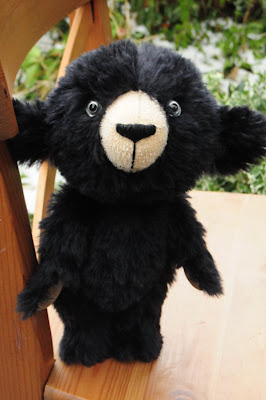 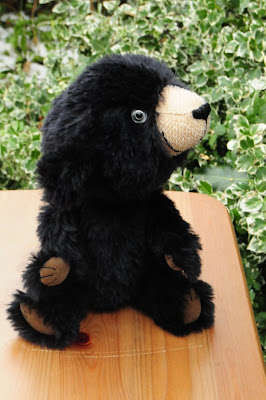 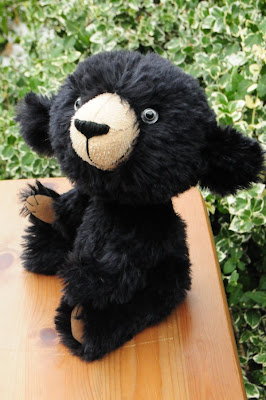 I'm not feeling very Christmassy unfortunately - and its probably entirely down to lack of trying. I just don't put enough effort into the whole card-writing, tree-decorating, carol-playing, mince-pie-making, present-finding thing. Maybe next year I'll do all that with gusto, and see if it makes me feel less Scrooge-like.

Anyway, the one thing I do always throw myself into at this time of year is the making of resolutions (keeping them, not so much). Most of them this year concern the efficient running of a teddy bear shop - and number 1 is to wow everybody with my shop displays.

Admittedly, I'm not very good at the whole window dressing thing, but I'm willing to have a crack at it.

The first problem is what to do in that awkward period between Christmas and New Year. On the one hand, Christmas decorations always have a sort of gaudy, morning-after kind of look after the 25th December, so I'd like to take the decorations in the unit down as soon as possible. On the other hand, the new year, new start, back-to-school feeling is still a few days off at that point, so it would seem a bit previous to start celebrating 2011.

The alternative is to have a sort of five-day display between the 27th and the 31st. Ideally, it would be a display which didn't involve a whole lot of work. Unfortunately, the ideas I've been contemplating involve a lot of work - including the creation of a set of false eyelids for every bear in the unit(!) Hopefully, that's more practical than it sounds... ahem.

Anyway, having promised much, I might abandon the idea, given the amount of work required over the holiday. But if I do go ahead with it, I'll share some photos.

In the meantime, I'd better get on and start thing about what comes after the five-day display!
Posted by Ruth at 13:28