Phew - made it again! This is Renee - the little golden girl. I love this pattern. It is becoming quite unoriginal, but it is my version of the Merrythought "Cheeky" bear and everytime I make one, I'm instantly happy with it - they have such a cheerful look to them. Anyway, Renee measures 9.5 inches from head to toe, and 7.5 inches in a sitting position (just personal notes, so if I take her into the Art & Craft Centre before I put her on the website, I don't have to make another trip to measure her).

Although finishing on a Friday afternoon is quite early for me, I was worried I wouldn't meet the target this week. This is the first time in a while that I've made a big, original bear - Hortense, in the last post - and I had forgotton how long it takes. I think, where I do make big bears, this is how it's going to be - one big bear of a new design, or with significant new design elements, and one small bear whose pattern I have used before. 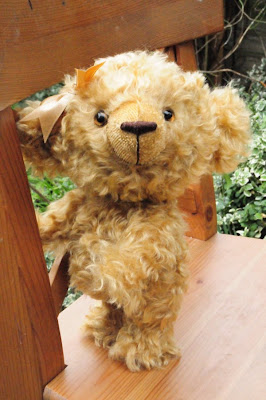 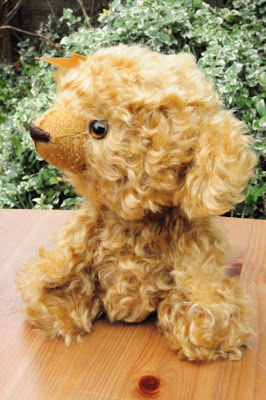 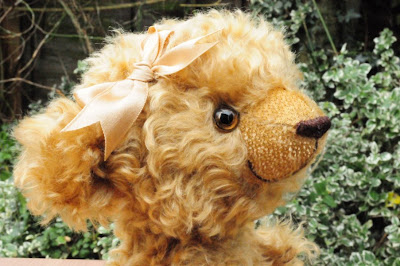 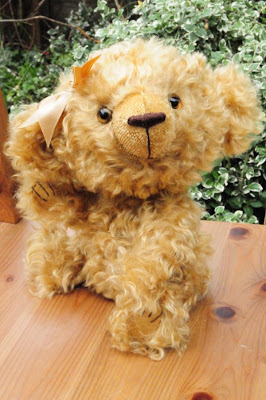 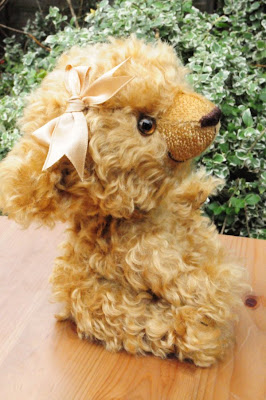 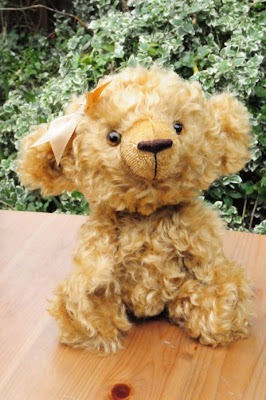 I think my next job might be a panda - I'm going to practice my realistic head design. I am also thinking of photographing the whole process. A while ago, I began thinking about printing a leaflet of some sort, to show the work that goes into each bear. Then recently, I was reading another craft blog, where the lady said that she was hoping to produce a 'look book', because people quite often ask her why her dolls were so expensive.

I am not sure which one would work better for me. I still think the leaflet - since people might like to take one with them, when they buy a bear as a gift, just to show the recipient of the gift. It would have to be quite a voluminous leaflet though, to show all the steps. The advantage of a look book would be that it could be bigger, with much clearer photos - but then, mine would be left at the Art & Craft Centre whilst I wasn't there, and might become disordered or disshevelled.

I am slightly worried about over-explaining. For one thing, I don't want to bore people. For another, I don't want to explain everything I do in a way which allows other people to make bears like mine, should they wish to do so. I don't think I really have anything which could be described as a 'trade secret', but nonetheless.

Anyway, hopefully I will be back soon with something to show on the panda front. In the meantime...