Back again - with Eric

I am still here, and I've finally managed to resume the two-bears a week target. Both this last week, and the week before that, I have been busy making a little family of bears. It was a Mother's Day idea - one relatively big bear, two medium cubs, and one very small bear with flexible arms with snappers on the end, so he can hang round the big bear's neck. This was the design originally intended to be a floral bear - as discussed in the last post.

All four bears are complete. However, I am waiting for clothes for them - which could be some time, given that my mother is still suffering with neck pain after the car accident. I am hopeful (although not too hopeful) that they will be complete by 3rd April.

In the meantime, I have another bear to show you. He's not part of the two-a-week. I made this one years and years ago - he was one of the first bears I designed and made myself, and you can see, from him, why I called my business 'BigFeetBears'. All my bears had these peculiar triangular feet at one stage!

Originally, he was called Harold, and I made another bear - identical but with bent knees and glasses- who was called Charles. Then my mother made wedding clothes for them, and Charles became Charlotte: she still sits in the corner of my unit at the Art & Craft Centre. Harold however, was never quite right: his jacket tended to slip off his shoulders. So recently my mother made him these dungarees, and he is now an Eric. 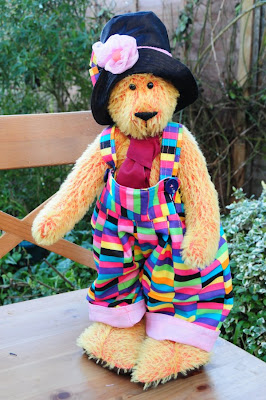 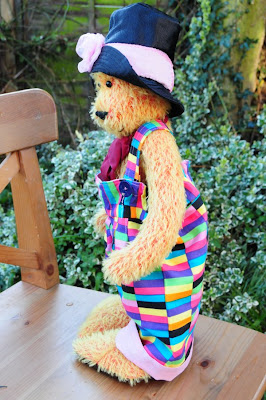 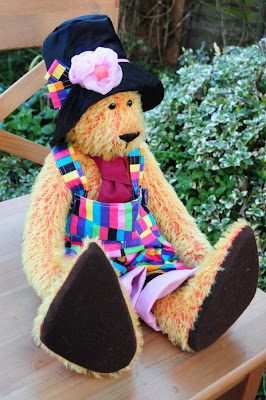 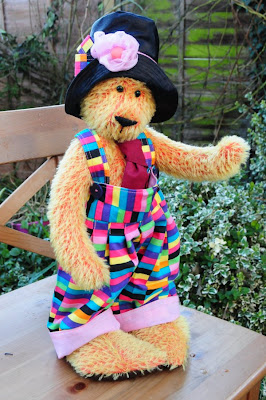 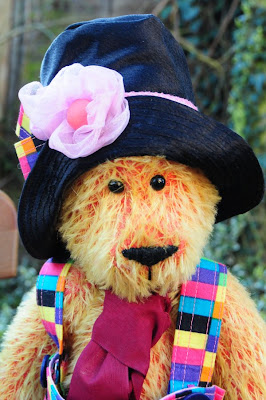 The dungarees are gorgeous - hand-made, and fully lined in pink linen. Then he has his black satin hat with the pink flower, and a red cravat. I think the dungarees really make him though - partly because they disguise his legs. As any stylist will tell you: wide leg trousers disguise long, skinny legs.

Apart from Eric and the Mother's Day bears, I have been working on the design for little block elephants. I have made several of them, but whilst they were very cute, the design was not right: it was poorly planned so bits of it were very difficult to sew.

It's looking a lot better now. I hope that this coming week's two bears will actually be two elephants. I am just right now contemplating things like tails and toenails (and possibly a hat of some sort).

It's going to be a busy week this week - I'm working a lot of days at the Art & Craft Centre. Hopefully though, I will be back with some elephants very soon!
Posted by Ruth at 13:01

Oh Wow, I can see why you are called Big Feet Bears. Eric's are enormous!
Love his trousers.