I was working at the Art & Craft Centre a little while ago with someone who's much more clued up about the business side of things than I am. I was telling her about the leaflet idea. She said, firstly, that all I needed for a leaflet was a couple of good photographs and a block of text, explaining the process. Secondly, that producing booklets containing 40-odd colour photographs would turn out to be very expensive.

Given that I've spent several days struggling with this blasted leaflet, this conversation put a bit of a damper on things. On the other hand, I'm really glad I talked to her about it: she's right, and she's probably saved me from spending a lot of time and money going in completely the wrong direction (thankyou Tracey!).

Having had this conversation, the more I think about it the more the booklet I'd planned seems completely wrong for the intended audience. And come to that, who would be a good audience for such a booklet? The original intention was to explain why the bears are so expensive, but writing a small book in order to do this is like using a sledgehammer to crack a walnut. In fact, it's like missing the walnut entirely.

People who are looking for a £4.99 teddy bear, pick up one of mine, and express shock over the price tag, are probably not going to be interested in such a booklet.

People who like the bears and buy one as a gift might be vaguely interested - but it would still probably be far too much information: they would be equally happy (if not happier) with a one-page leaflet which dealt with the subject more succinctly.

The only people who might possibly find anything interesting in such an exhaustive account are those who design and make teddy bears themselves - a limited market, particularly among the customers at the Art & Craft Centre.

So, definitely no booklet.

I am still considering the idea of putting the photographs together in a folder, and leaving it in the unit for people to look at if they want to (this was my pet idea - it's kinda hard to let go of it completely!). This would cover all my bets, without being too expensive. I would also find out exactly how interested people are in the process. If it's a bad idea, it won't do any harm.

In the meantime, I wanted to show you something I found on someone else's blog a little while ago. Do you remember I made the little wren from Abigail Patner Glassenberg's wonderful book, The Artful Bird? I wanted to go on and have a go at some bird designs of my own - but British birds. Well, someone has beaten me to it, and they are wonderful! I was reading the Domestic Sluttery blog the other day (click here) - a lovely blog, particularly good at finding quirky little independent web shops. Try for example, Present and Correct, Our Shop, and Re.

Anyway, one day they had a link to the work of Abigail Brown on The Make Lounge blog. Look at this: 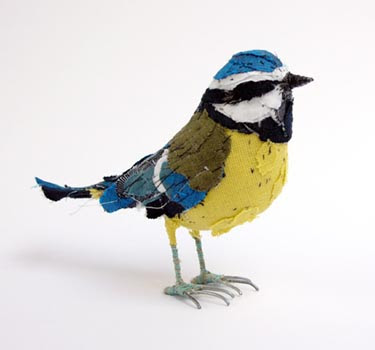 Isn't that just so sweet! God, I wish I could take photos like that!

I would still like to have a go though - although it's the crow family that I would particularly like to make. It's still a way off at the moment though. I'm still working towards this show. I have made three little bears and am working on the fourth. They are finished: I am just contemplating embellishments. Hopefully I will have some pictures soon.