This was played on Strictly Come Dancing last year.  I'd never heard it before, but it's a great song!
Anyway, things have been progressing at snail's pace here.  To make it worse, I have commissions!  Deadlines!  And I'm not getting anywhere!  I have managed to get another of my Cheeky-style bears made, but she's not ready to photograph yet - she's only half-dressed.  I am really pleased with her though.
I was asked recently to supply some bears for an art gallery which is opening locally.  There is no formal agreement, but I'm working on the assumption that I need four bears completed for the gallery by the beginning of November.  This Cheeky will hopefully be one of them - if her costume comes together in time.  In addition, I hope to make two largish pandas - like Humphrey - and maybe a woolly Viking mammoth!
I've also been asked to make three mammoths for someone else - including one in a fantastic solar-system-print fabric!  I would love to be able to give that mammoth one of those transparent, spherical, astronaut helmets, but I sadly don't think that's really accomplishable in fabric.
Finally, I was asked to make one of my hanging hearts as a Christmas decoration - these ones.  I have mixed feelings about them.  When I was at the Clare Priory craft fair, I had the opportunity to hear people's feedback on them: a lady come up and said, "Oooh look - they've got little bats clinging to them."   Hmmm.  Anyway, I kind of looked at them differently after that.  I'm not sure where the bat-thing came from, but they could be little rats - or little anything.  It's only the fact that I am a seller of teddy bears which indicates that they are in fact, teddy bears.
So I wanted to change the design a little - and give them a more teddy-like face.  Here is the result.  The first five pictures below are of the commission heart. 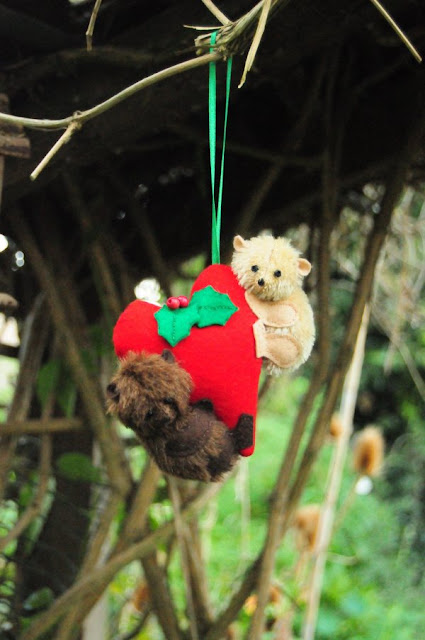 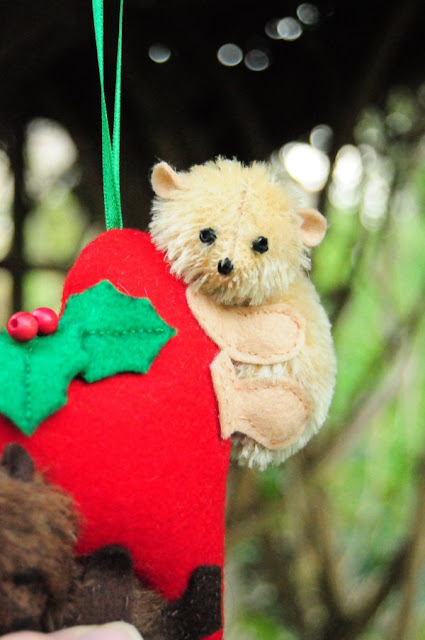 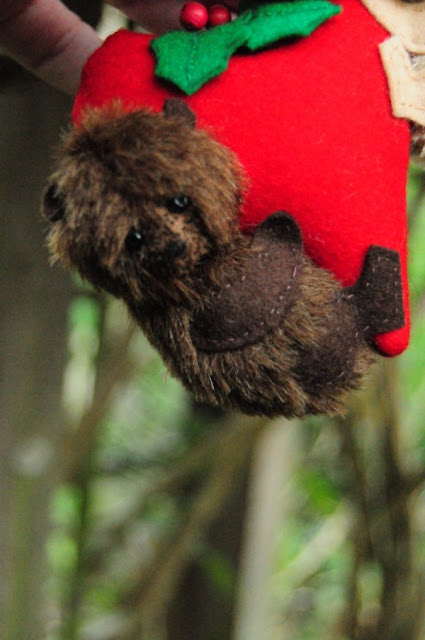 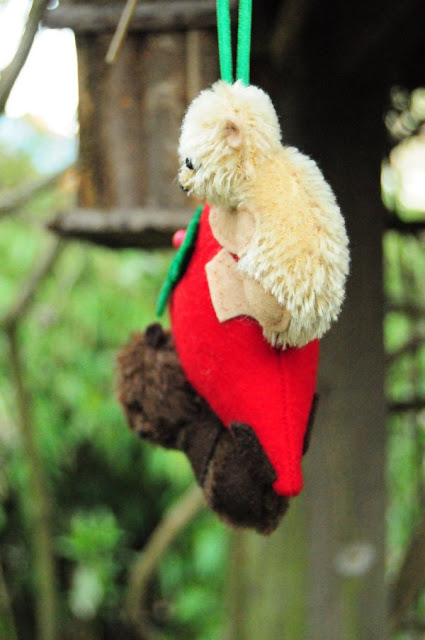 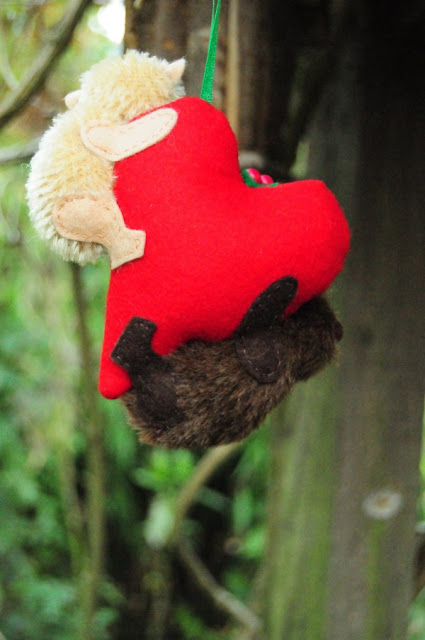 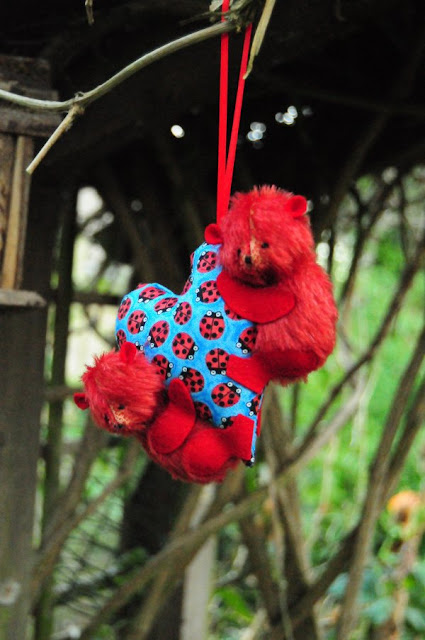 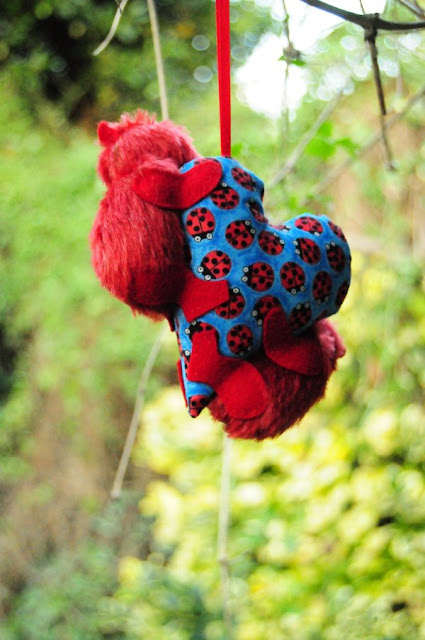 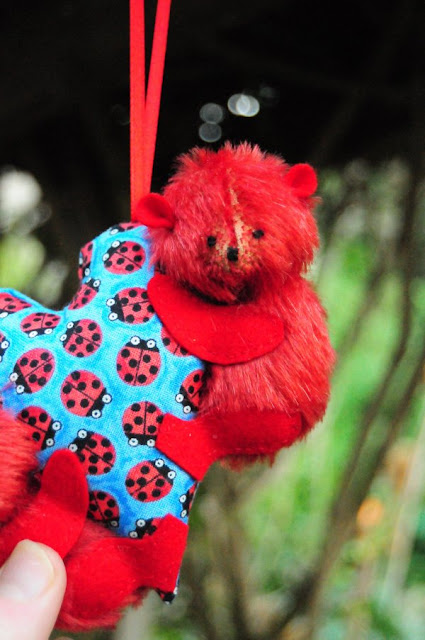 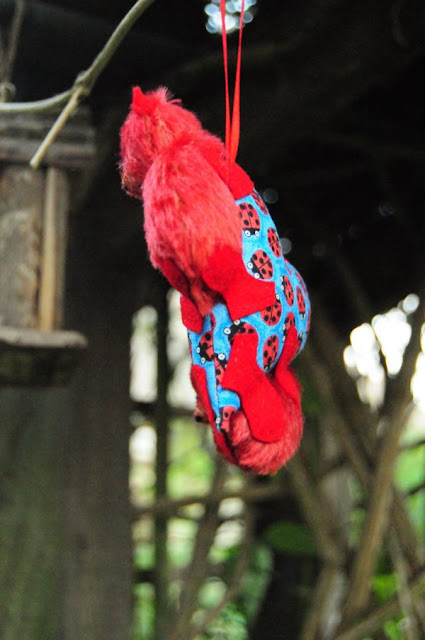 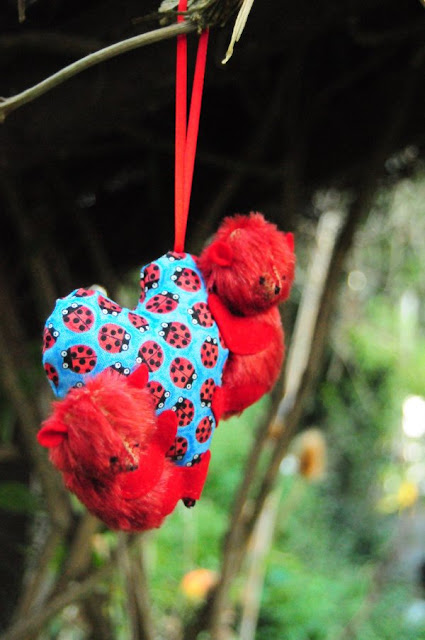 What do you think?  Little bears - or little capuchin monkeys?!

Well, whatever they are, I am pleased with them.  The lovely thing about them is that you can actually be quite expressive with the limbs.  I love the penultimate picture!

The down side is that they take ages to make!  But it's coming close to Christmas - and they may sell as tree decorations.  And I can't afford to be too fussy at the moment - both September and October have been really quiet months at the art & craft centre.

I have two more, single bear hearts which I forgot to photograph before I took them to the Centre, but I will try to get some pictures next time I go in.  In the meantime, two largish pandas coming up...
Posted by Ruth at 19:07