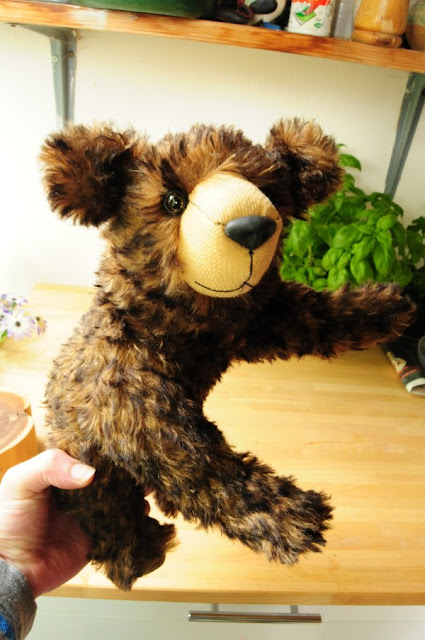 I have finished my latest bear.  His name is Dominic and - like Hugo and Pongo before him - he has an internal wire armature, and his limbs are unjointed.  I am still not certain about this.  I do think the rigid, unjointed body is very appealing.  Maybe it's the realistic thing - there is something very unrealistic about a bear whose limbs you can move as you please.

However, I have never managed to make these bears as sturdy as I would like them to be.  I suppose I am making something that is fragile and breakable - like a piece of pottery or (and I thought of this when I was making the teddy bear bouquets) the bunches of twisted willow you can buy from florist shops.  When you buy something breakable, you treat it with due care.  The problem is that people don't expect teddy bears to be breakable - they are characteristically hard-wearing and long-suffering - so I worry that these bears will get bumped around and the wire armature damaged.

I'm thinking perhaps a note on the label to explain their construction might be a good idea. 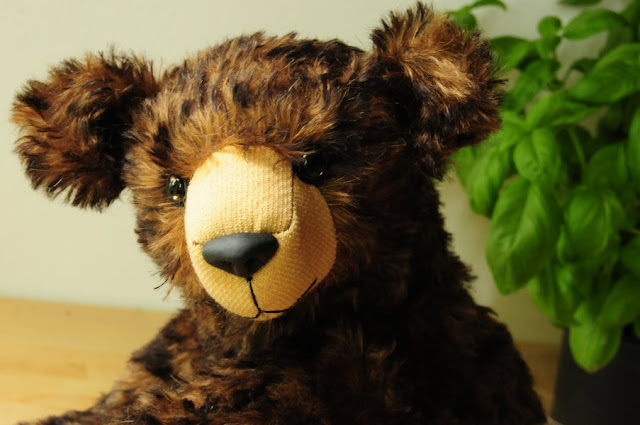 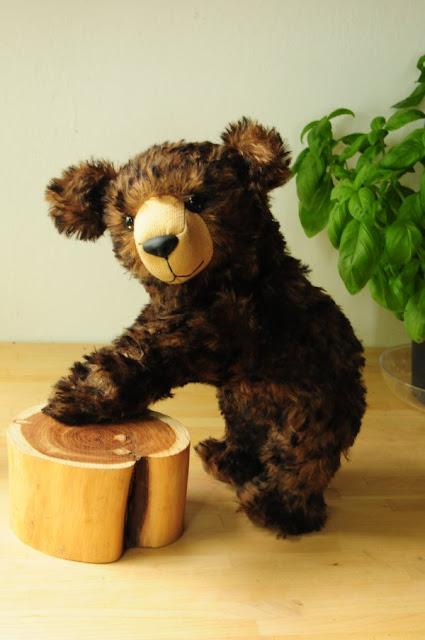 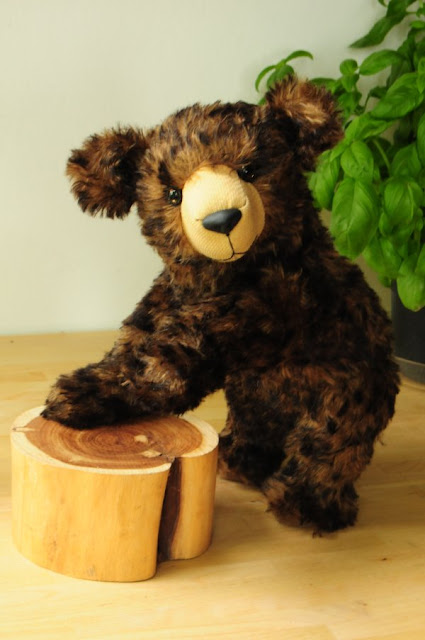 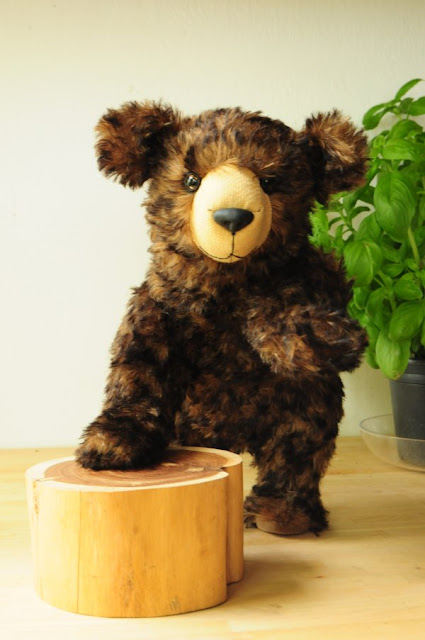 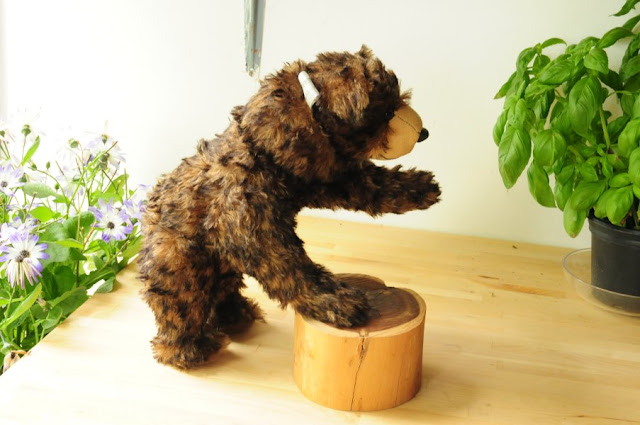 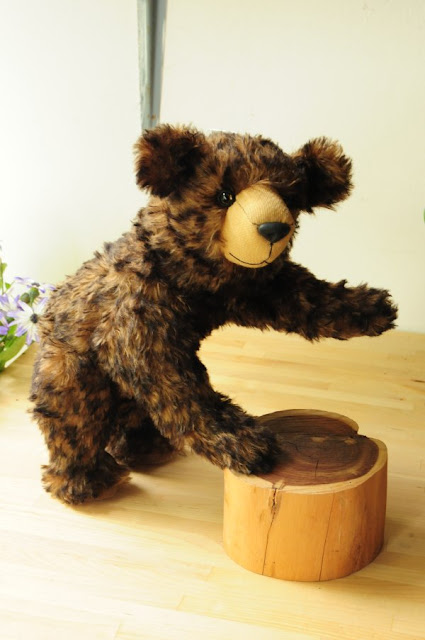 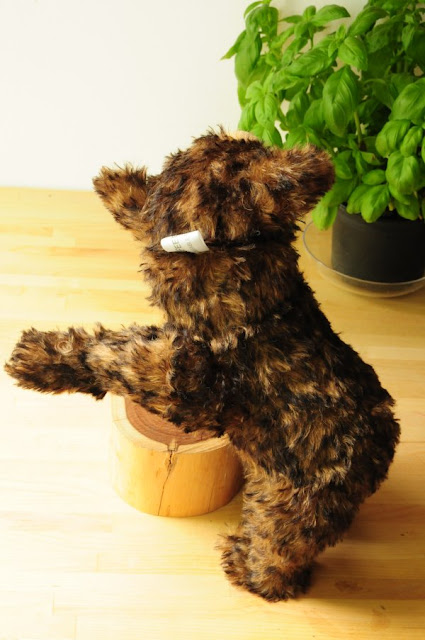 What I would really like to do is to make a bear standing on all four feet, but in walking pose - rather than having all four feet flat on the ground.  As you can see below, Dominic pose is actually quite close to this.  Balance is going to be a problem though.  As he is, he leans onto his lifted front left leg, and his rear right leg goes up in the air.  When you pull his rear right leg down to rest on the floor, it looks great, but he won't stay that way - even with steel shot in that rear right leg.

I suppose his front right leg could be angled in slightly, but effectively it is already quite close to the centre - as close as it can be without looking unnatural.  Hmmm. 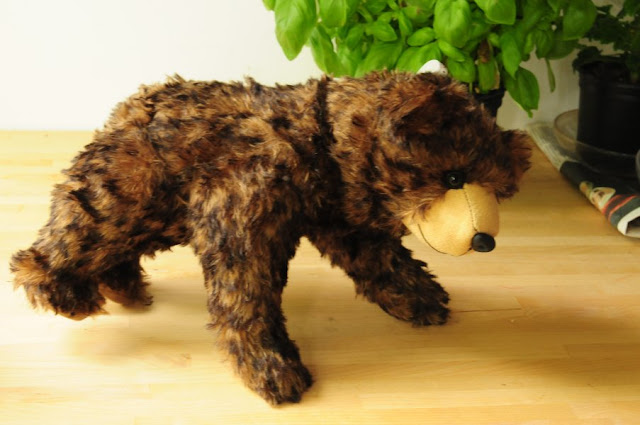 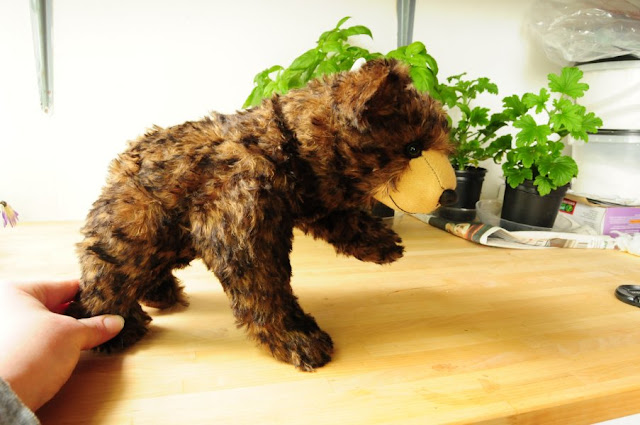 He's a lovely shape! Maybe with the other back leg forward a bit he might balance? It might be worth watching a bear walk for a bit as four legs work a bit differently, don't they? I was trying to explain the difference between trotting and cantering in horses to Minnie and fell a bit short i think! Or maybe a nose down/front paws digging posture?
Can you see daylight yet by the way?

Hmmm - what is the difference between trotting and cantering? Apart from the speed? Anyway, yes, I'm just going to play around with the wire a little bit. I'm rather taken with the front foot up in the air, but I can't see it working in practice.

I do like coming on and seeing your new designs.
He looks as if he is cocking his leg on one of the photos (do bears cock their legs?).
If you don't mind me saying, I am not sure of the label in the neck. I think it may look better on the back leg or under the tummy.

Hi Polly. I'm not sure if bears cock their legs(!) An interesting question.

I have never really been happy with the labels. I have a few bears at a local gallery though, and they requested that everything has permanent labels. I wanted to put it somewhere where it would be subtle - it does rather mar the realistic look. The neck is the best place I could think of - at least you can turn the label away from you. I suppose the back of the leg might work (or on the inside of the ankle).