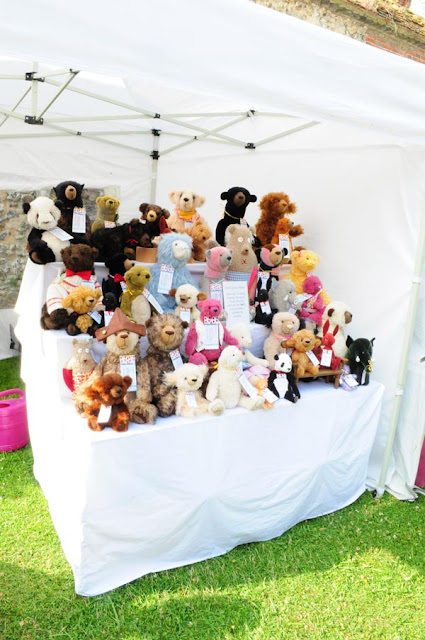 Good morning!  Well I didn't find homes for many bears at the craft fair unfortunately - it was far too hot, I think.  Everyone was just lying around eating ice cream.  But it was a lovely atmosphere, as it always is, and we had my great aunt with us, and stayed over in a really nice B&B, so I guess it was a bit of a holiday, aside from anything else.

I sold a little grey mohair elephant called Christabel, a black cashmere rabbit who I think was called Thomasina, and at the last moment a gentleman came back to the stall to pick up Floyd - the big bear with the blue gingham trousers and pink marigolds.

There was a lot of lovely comments and, as I think I said when I did this fair the first time round, when I'm sitting on the stall, I can pick up some feedback, which is always interesting.

My display didn't turn out quite the way I'd hoped though!  I knew, in theory, that my table was just slightly over half the width of the gazebo.  Somehow though, I hadn't quite included the depth of the gazebo into the equation, so my table ended up looking rather diminutive - as you might be able to see in the picture below.  And the bloke in the tent next to mine put a little table out the front - projecting out beyond the line of stalls - where he demonstrated his wares - so people would come to look at the bears and be distracted by his patter next door.  Very irritating!  And I couldn't move my stall forward to compete with his because it was all carefully balanced on a hundred flower pots!

So, if I do this fair again, I need another half-length table, and it all needs to be further forward.

But, I do need to seriously reconsider some things.  Although it was a lovely weekend, I lost money on the stall fee, and things haven't been any better at the Art & Craft Centre of late.  Clearly the business model (such as it is) needs tweaking. 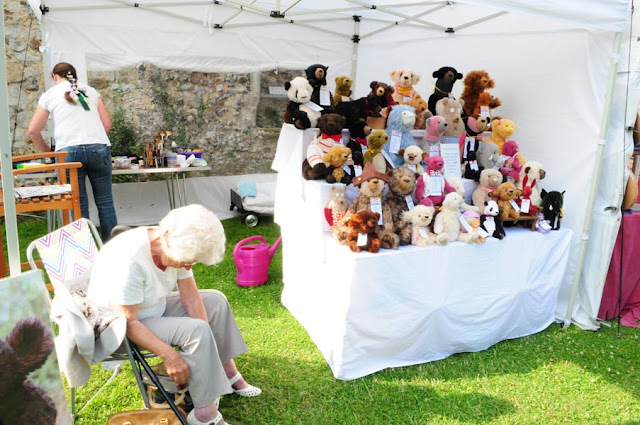