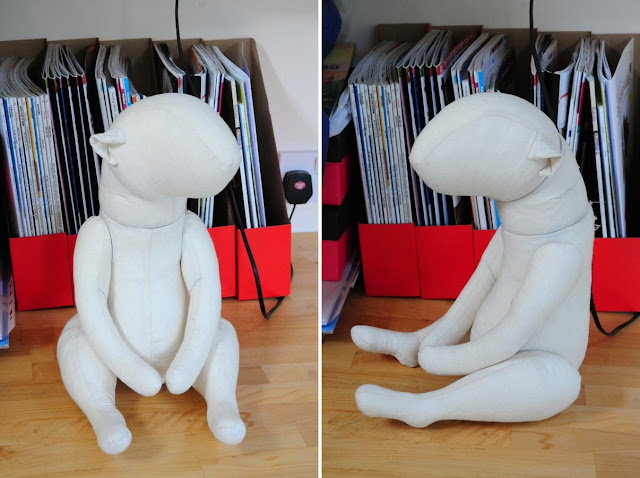 When I started thinking about what the pattern for the head of the moose should look like, the first thing that came to mind was the polar bear pattern that I came up with when I was trying to replicate an antique Steiff, a couple of years ago.  I do still have a version of that pattern luckily, so I dug it out and tried adapting it.  Although it bears some similarity to a moose, I couldn't quite get it to work, but I was so taken with it that I decided to run with it anyway, and spent the next couple of days trying out different ideas for the rest of the bear.

Having finished him though, I can't quite decide what he is, if that makes any sense.  He could be a polar bear.  Or a bull terrier, if I added a tail?  But there is something quite... baby-cow-like about him too!  I guess he has that kind of roundness that lots of juvenile animals seem to have - when they haven't quite taken on the characteristic shape of their species.

All that sounds very critical, but actually I'm really taken with him - whatever he is.

When I had an entire retail unit to fill, I would have made him in white mohair as a polar bear; then added a tail and an eye patch and had a go at making him as a bull terrier; then added horns and hooves and tried him as a cow (or a bull).  Now I'm trying to make purely one-of-a-kind bears, I feel constrained to decide what he is and stick to it.

That's the disadvantage.  The advantage though - of having a smaller space (I'm downsizing the retail unit to a glass cabinet) - is that I don't have to make large numbers of bears, so there's no hurry to finish this one.  I'm just going to sit Fred on the shelf and go back to my moose.  At some point, someone will ask me to make a baby cow, and then I shall whip out this pattern and put horns on it!