This is the model for "Moose2', as he is currently known.  He was supposed to be a sitting-down version of Mossy (aka 'Moose1') but somehow those tree trunk legs didn't look right on Moose2, so I attempted something more realistic.

Is his hump too big?

There are several things I'm not sure about.  He is sort of lying partly on his side (as mooses do), which makes it very difficult to do the two 'underneath' legs.  If I had made the complete leg and applied it as with those on the outside, he wouldn't have been able to sit properly.  So I simply sewed the underneath legs into the seam at the base.  If you lift him up then, there's nothing to look at underneath(!)  I am wondering if this makes him… less appealing, when you go to pick him up?

It does make him seem more of a statue than a soft toy - which is probably a good thing, because with his steel shot and his soon-to-be glass eyes, he's definitely not a toy.

Another strange thing is that because the two outside limbs are so skinny, they are not very sturdy.  I could try a steel armature I suppose, but that would just be like adding an element of gratuitous danger - the legs don't actually need to be sturdy, after all.  It's just that it looks weird when they flap.  Perhaps better to simply stuff them with wood wool and sew them as firmly as possible.

I'm not really sure about that bent front leg either.  It looks really strange to me - but then when I see a picture of a moose or deer with it's legs bent like that, that looks really odd too.  Hmmm.

Moose2 will have antlers by the way, in the final version. 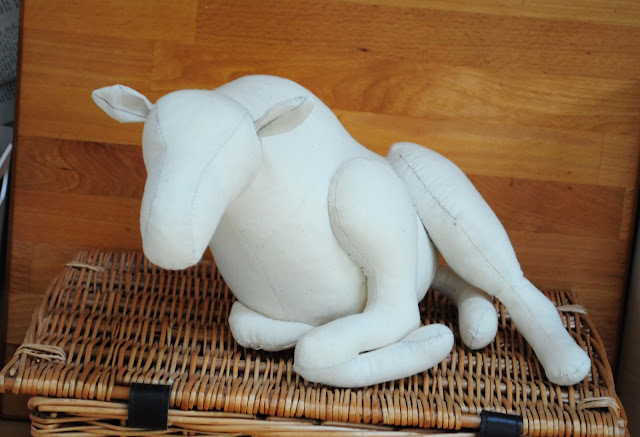