Good morning!  Bit of a random post this morning.  First of all, I went into the Art & Craft Centre yesterday and Charlie6, the homewares business on the ground floor, had these honeycomb pom-poms for sale (left).  They are lovely: I would hang them everywhere if I could.  I came home all enthusiastic about making them - and that's my attempt (below right) from this online tutorial.  It is really easy if you happen to have piles of tissue paper handy, although it takes a bit of time gluing all those sheets together.

Okay, having used the phrase 'having piles of tissue paper handy', I am now wondering whether it would be possible to make one out of toilet roll... 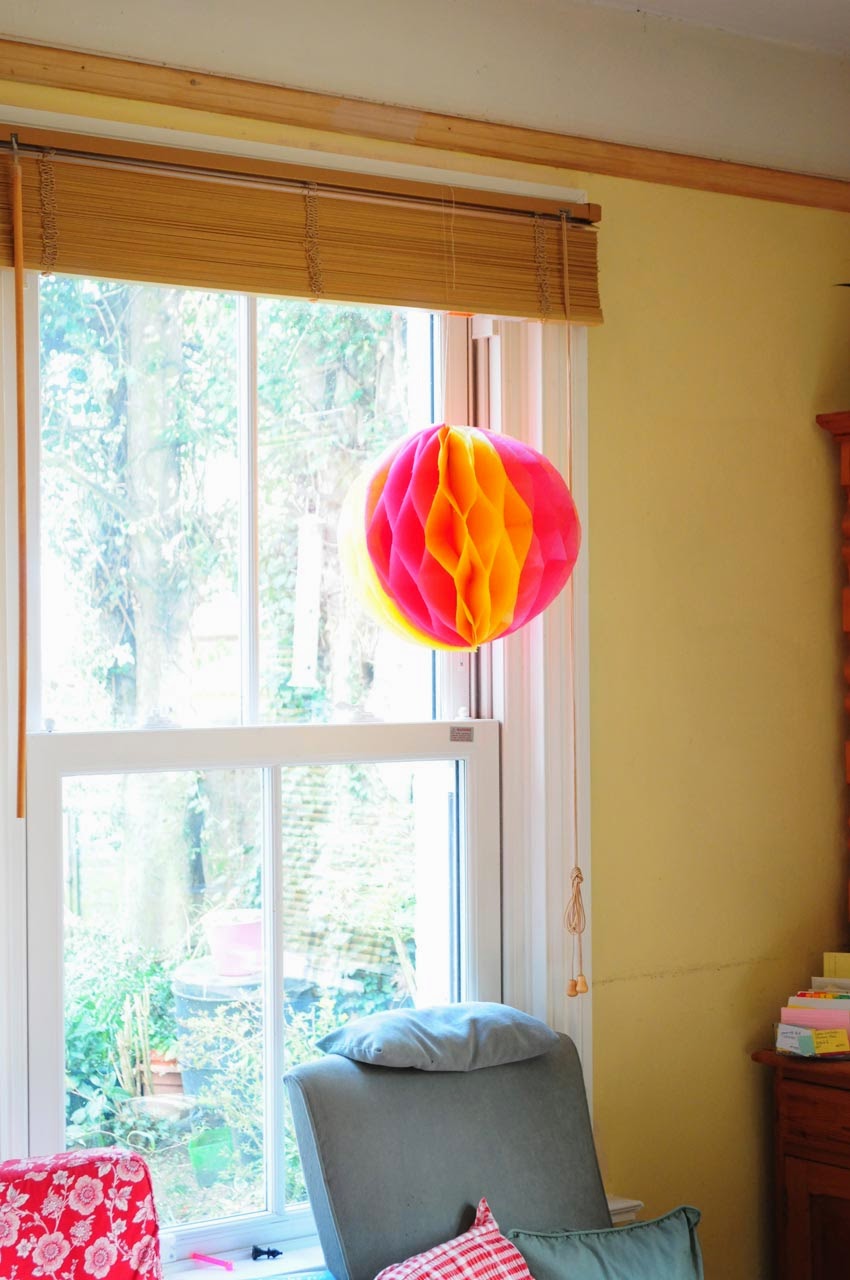 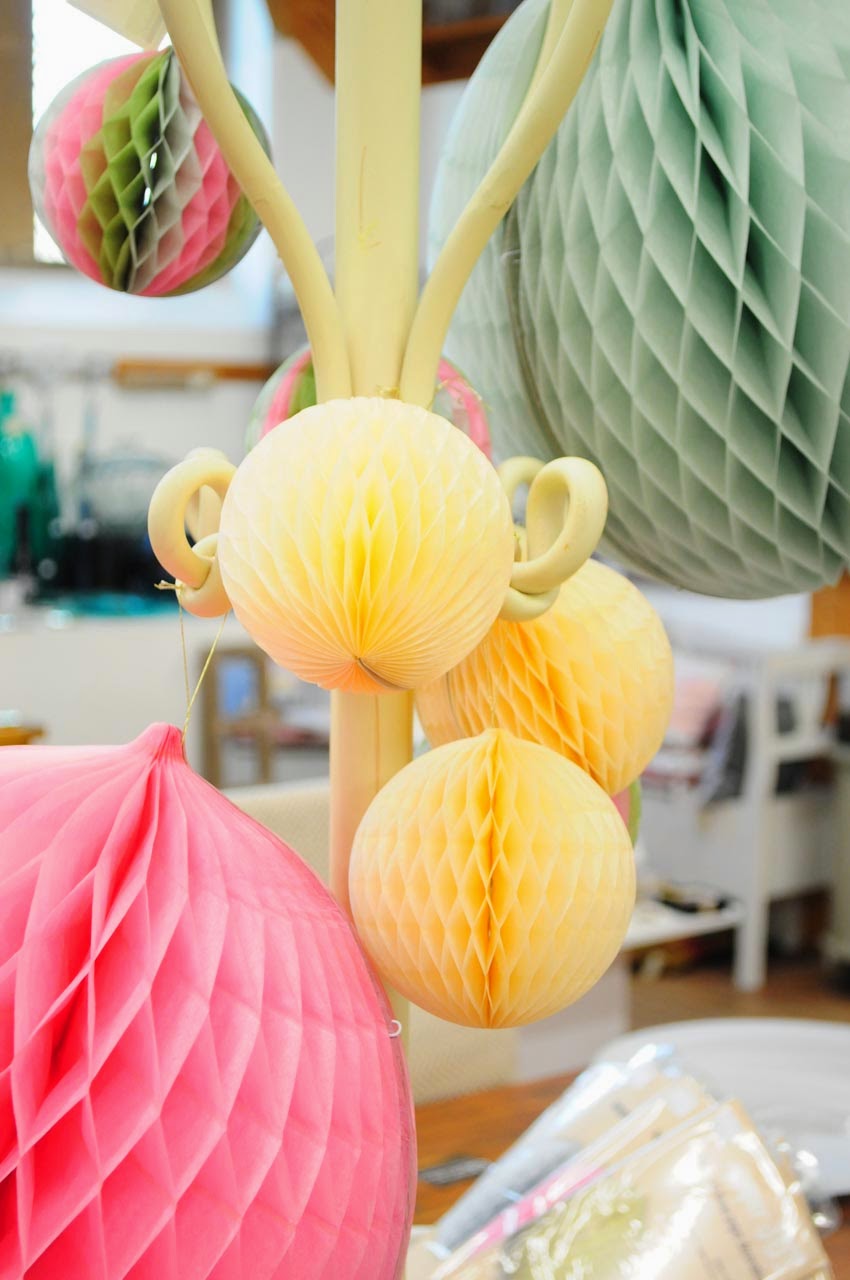 Over the weekend, I was at a bit of a loose-end.  I had the day off work and I was waiting for mohair to arrive (or the linen - either would have been good).  In the end, I wasted the time dithering.  However, I did have a go at another online tutorial I've been wanting to try for a while... 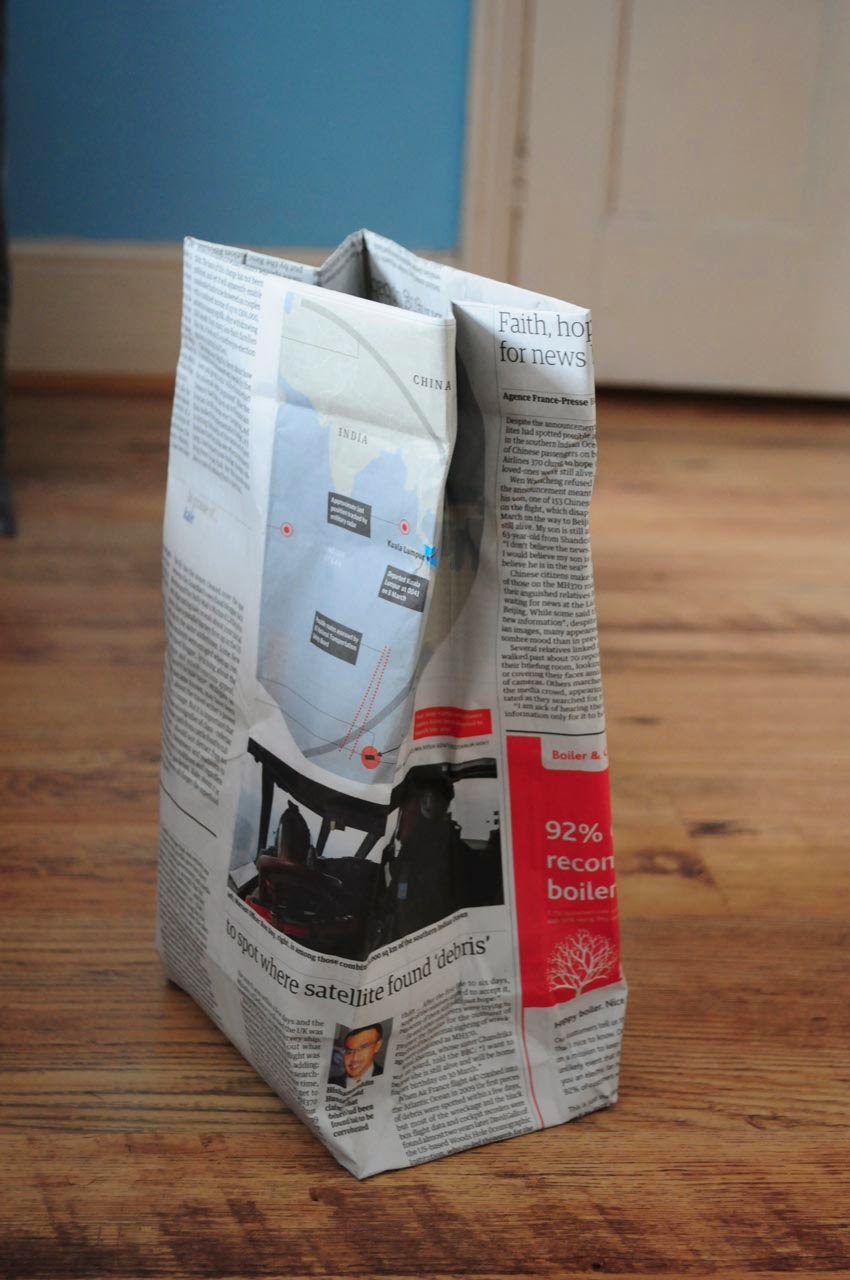 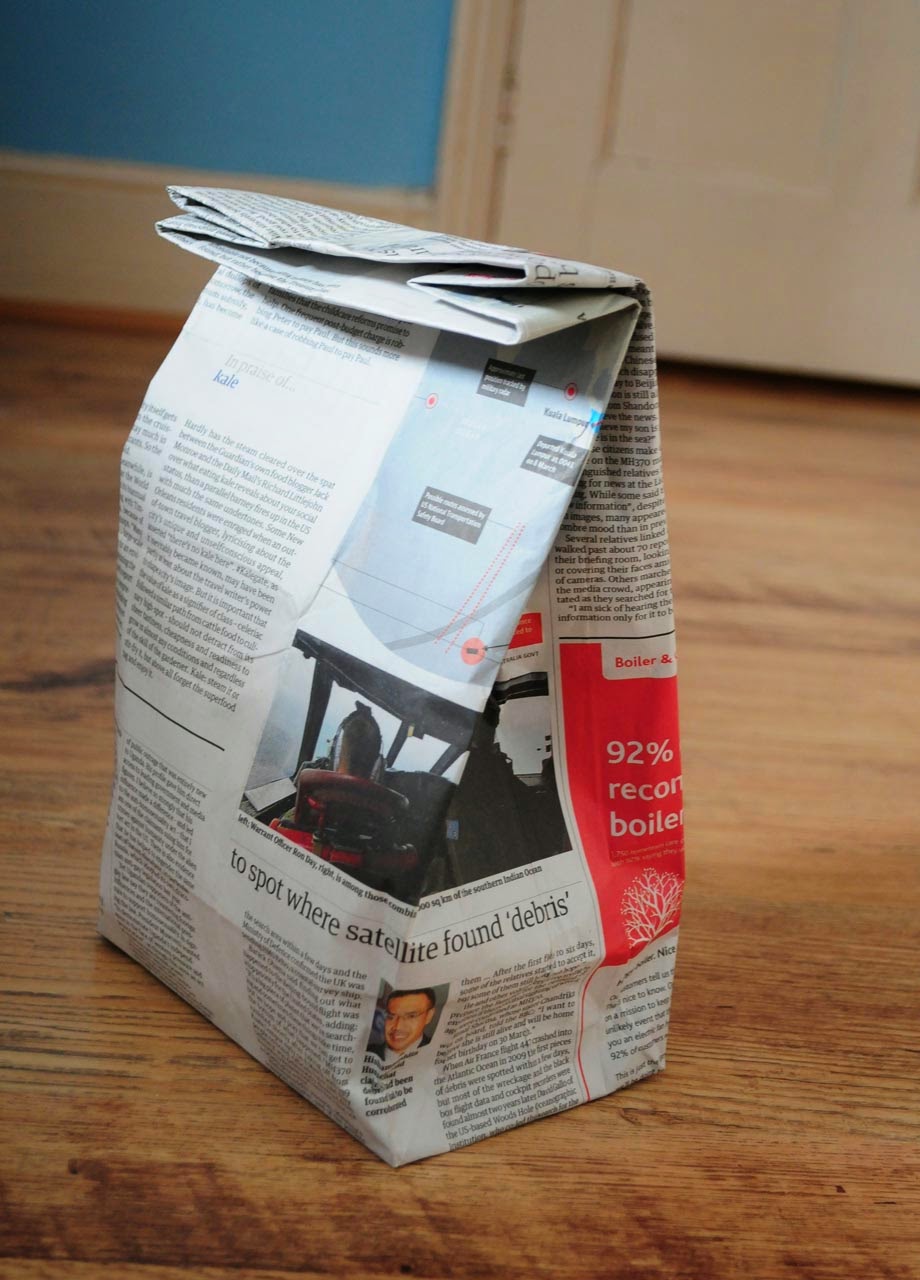 It is a US-style lunch bag!  You can make it from one sheet of paper, but if you glue three sheets together (one on top of the other), it is sturdy enough to hold a medium-sized BigFeetBear.

I really like them.  This one has a lovely feel to it, and the bear fits so perfectly inside.  I showed it to my mother though and she was like, "so you're going to give your special, carefully-made mohair teddy bears to people wrapped in newspaper, like fish and chips".  (!!)  I can see the point, but I still like the bags, and making them out of a more salubrious material sort of defeats the object - part of their charm comes from the fact that they are recycled.

And I did use the Guardian newspaper - this isn't a cheap tabloid paper bag!  I love the fact that one of the headlines visible on the outside is 'In Praise Of Kale'.

Anyhooo, so I would like to use this idea somewhere - whether on a large scale, or just for a particular series of bears - whether out of newspaper, or some other material - but I haven't quite figured out how to do it yet. 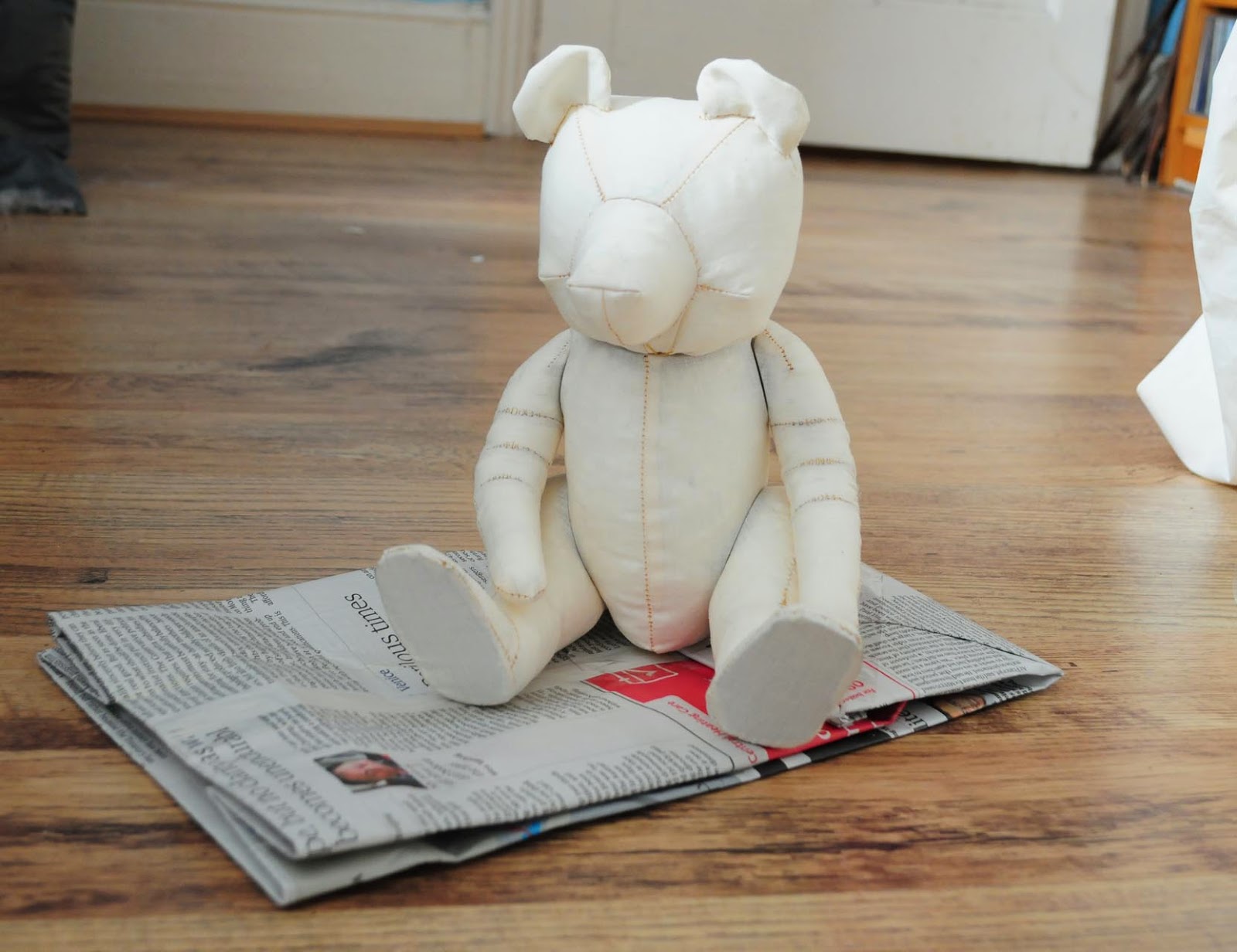 Finally, I have been thinking of having a go at a market night for charity on Facebook.  The idea of a market night - as I understand it - is that, after plugging it well in advance, you upload a folder of pictures of items for sale, and then at an appointed time, open it up for comments.  If anybody wants to buy something, they then comment 'sold' under the picture, and then message you with their email address so you can send them a Paypal invoice.  Obviously it's first come first served.

It does rather depend on having lots of interested people there at the right time, but I can't see why it shouldn't be spread out over an afternoon, or even an entire day.

Teddy bears would be too expensive, but perhaps a range of little birds?  I'd have to find something else to sell alongside them.

Anyway, something to think about.
Posted by Ruth at 09:41