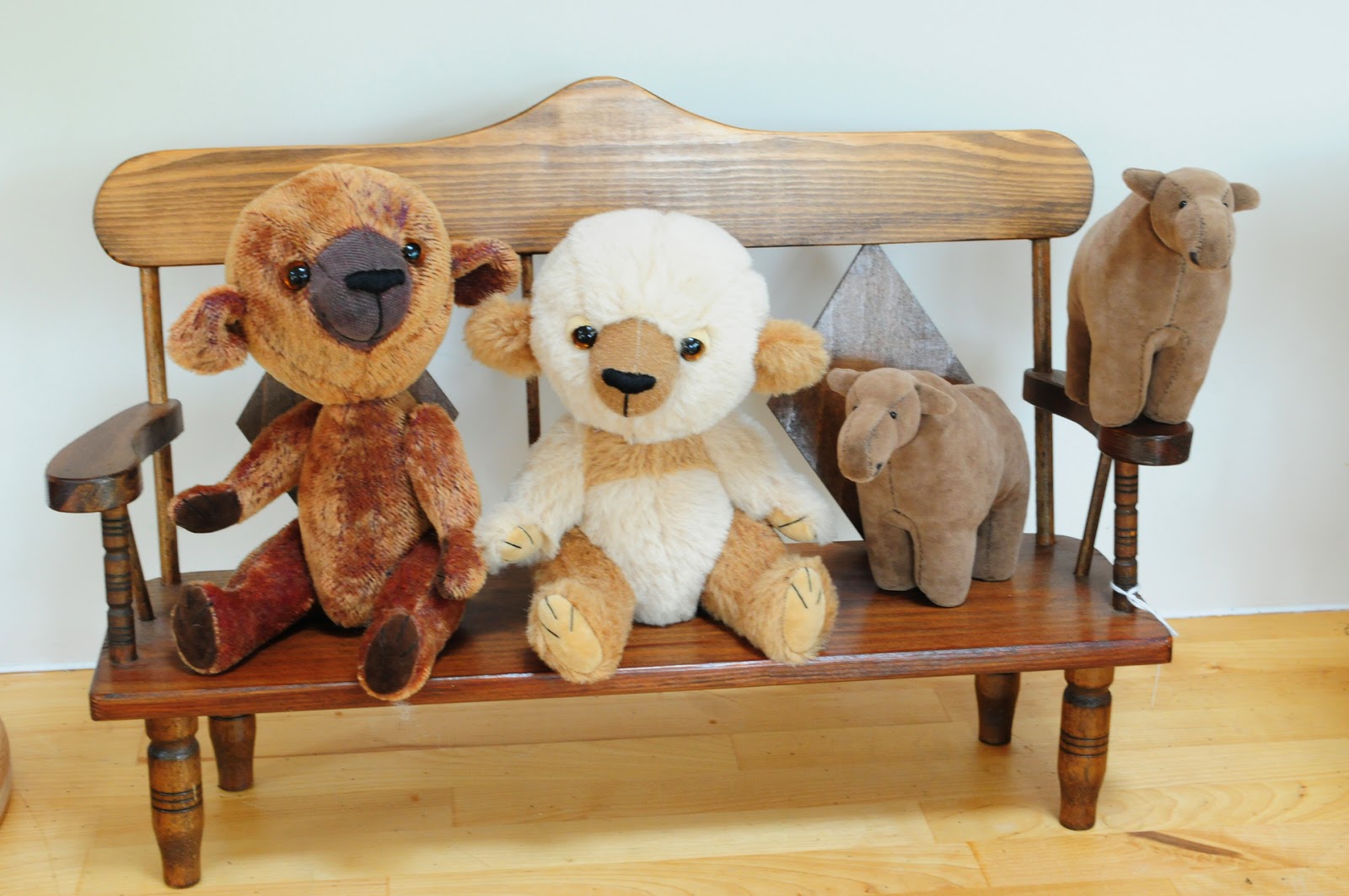 Good morning!  This is a [not very good] picture of some of the creatures I managed to finish for the Marks Hall Garden Show, this weekend just gone.  Their names are, from the left, Gideon, Lenny, Nelly and Brenda.  I was particularly chuffed with Lenny.  You can't see them very well, but he has cashmere eyelids.  I might try another bear of this style with eyelids - they really suited him!

Lenny found a home at the show, as did Patti the little moon bear, the last of the little black wool mammoths, and Mossy the moose.

At any other show, this would have been wonderful, but Marks Hall was particularly expensive (it covered the Friday night as well, when there was a gala evening) so I fell far short of covering the stall cost.  It sounded like a lot of people didn't do as well as they had hoped.  But it was terribly hot - particularly on the Saturday, when there didn't seem to be many people there at all - and apparently it was the first time they've had a show there, which always makes it quiet (in my limited experience).

And of course, there's the fact that I'm not very good at selling!  Once again, I was right opposite a fantastic salesman, so I did at least come away with a few pointers.  He was selling emu oil, of all things.  I could tell you all about it in great detail - I heard his spiel so many times.  A natural pain relieving balm, used by the aborigines of Australia for thousands of years, and now shipped all around the world and used by the national sports teams of Australia and New Zealand.  The key ingredient is emu oil, which he described as being "from their backs, off their feathers" but which, after a quick Google search, seems to mean 'emu fat' (euw!).  Emu fat is supposedly absorbed into human skin unusually easily - penetrating "all seven layers".  They put lots of herby stuff in it - arnica, wintergreen, clove, sweet marjoram - each of which is thought to do something good, like relieving pain or inflammation, or increasing circulation.  And its all 100% natural, so [he said] there are no side effects and it doesn't interfere with any medication you might be on.  He even said to one lady that, in an ideal world, they'd have her off the steroid creams completely, and just using the natural emu oil balm.

I'm not completely sure that using a natural product means there can be no side effects, and I think he was misusing the phrase 'barrier cream' to mean a cream which treats just the top layer of skin.  He also had an annoying tendency to say, of the increased circulation, "obviously the more blood you have flowing round your body, the better", but certainly you'd almost have thought he was a medical professional, listening to him.

I wouldn't recommend the emu oil (I'm on the side of the emus) but his selling skills were certainly very effective.  I'm hoping I absorbed some of them - through all seven layers of skin, of course(!)

This guy reminded me very much of one of the ladies at the Art & Craft Centre, who is also very good at selling.  Both of them have a spiel - not some sort of rigid speech they trot out - but they have clearly thought carefully about the best way of explaining the features and benefits of the products, so they have easy phrases to hand, whatever circumstances arise.

I've never liked the idea of plotting what to say in advance - it seems a bit false - but I am coming round to the idea, if only because it must be better than saying nothing at all.

Anyway, sorry for a long rambling blog post.  I now have a luck dragon to make, and hopefully lots of little things.  My next fair is in Kensington on the 14th September.

Oh, as a P.S., I'd just like to say that apart from the poor sales, the Marks Hall Garden Show was actually quite lovely.  The grounds were beautiful and they had lots and lots of plants for sale - which has never been one of my interests, but even I bought some.  It was also nice to have just a single craft tent.  There were less exhibitors, which made parking and packing up much easier.  They had a big brass band which played all weekend, and a hog roast stall which sold lovely veggie burgers for breakfast and vegetarian paella for lunch.  And of course, there was a cracking face painter!