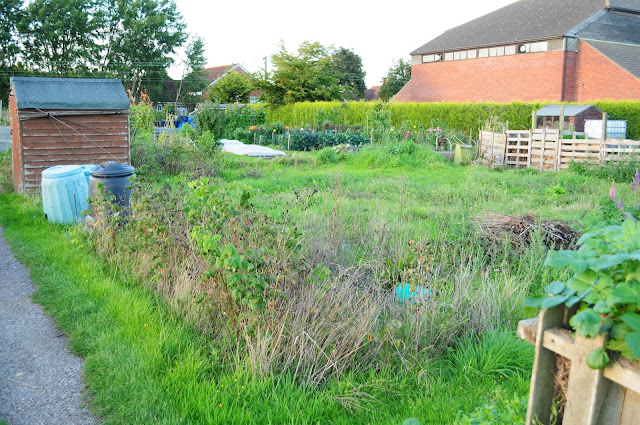 Well this is at least part of the reason why: I now have an allotment!  It's quite exciting and I'm hoping I am going to surprise myself.  I've never really been interested in gardening; my mother is the gardener in our household - (she has a big garden and three allotments) - but for me it's always brought back memories of having to do gardening chores as a small child.  I have loads of good memories of running round in the garden but the thought of actually gardening gives me a headache.  Visiting wool shops has a similar effect.

There are several allotments that are going spare in our village though, and they're getting rather overgrown, and starting to cause some concern, so I suppose it was a mixture of community spirit (not something I usually suffer with) and a sense of challenge that brought me to the point of signing on the dotted line.

My allotment has a teeny-tiny little shed in one corner (just the right size for a portaloo), a well in another corner, a couple of compost bins, dozens of manky old raspberry canes and a tonne of weeds!

My aunt and I have turned over the larger part of it, burnt armfuls of stuff on the bonfire, planted daffodils and had a big heap of horse poop delivered.  That last arrived rather unexpectedly so we were shovelling manure in the evening as it was getting dark, hurriedly trying to tidy it away into one of the compost bins.  I'm told it mulches down well.

The whole digging thing has been lots of fun - hell on the lower back of course - but removing weeds appeals to my pedantic nature.  And when I get peeved with something, I can just bury it and hey, the problem's gone until next year!  :-)  I am slightly worried that I'm only going to be good at the destructive, fighting-weeds side of it, and nothing good is going to grow, but we shall see.

I had a wonderful thought the other day - we could have pigs!  Little orange pigs like Paul O'Grady.  I'm sure I read somewhere that they're great at turning over the garden for you.  Not much help when you're trying to grow stuff of course, but we could have them on a separate allotment when we plant stuff.  It's probably completely impossible, but worth looking into all the same.

As for the bears (who? what?), I have still been making but it's probably true to say I haven't done anything new for 3 months.  We had the big Hugglets fair in September, in Kensington Town Hall, and I made lots of things for that - puffins, hedgehogs, crows, and lots of little bears - but they were all things that have appeared here before.  I am fresh out of creativity at the moment.  I think its because I'm a one-track-mind kind of person.  When I get really involved in something, everything else suffers.  But no longer - I must get my head down and start designing again!

The picture below is from the Hugglets website - me, my mother and my aunt at the show in September.  Thankfully it was quite a small photo so we look quite charming.  Just think how our customers must have felt though (and we did of course greet all customers in this formation)!