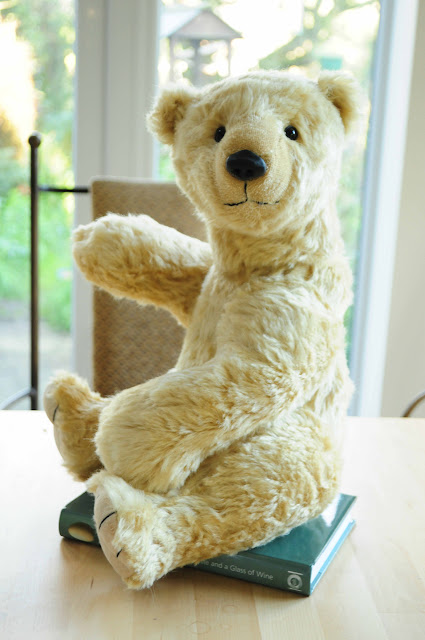 Hello - back again!  I'm sorry for the lack of posts: things have been weirdly up and down here recently.  For a start I have a horrible cough/cold thing, so I'm stumbling around being really clumsy, with the constant sensation of being about to sneeze.  It's difficult to concentrate on anything, which is very annoying.

Things were rather low even before that though.  Back in October, I was on a bit of a high: I discovered Tara Swiger's podcast and was getting enthusiastic about the idea of going back and looking more carefully at the fundamental stuff in my business - stuff like, how much does it cost me to make the bears, and how much profit am I making.  I was thinking about pricing, productivity, how to become a better designer, how to write better Etsy descriptions; it was all rather exciting.

I heard a episode of the brilliant After The Jump podcast with Grace Bonney, about how to deal with negative comments on your blog, and I was thinking about this vis-a-vis craft fairs.  Not that I get negative comments about the bears themselves, but sometimes about prices - or indeed, the very concept of teddy bears for adults.  Of these comments, I could say - with Swiger - the people who say these things are not 'my people'; they are never going to be my customers, so why worry about them?  Why not just move on to the next person?  Of course, it's not as easy as that - you have to find a way of putting the negativity behind you, before you can move on.  In a different discussion, Swiger has spoken of having a 'script' for dealing with certain types of commenters, and this appealed to me.  I was planning a blog post along the lines of what my script might look like for dealing with negative comments at craft fairs - what to say to people who gasped over prices, and asked me what the bears were for, if not for children.

But when I looked at how much it cost to make the bears, prices had to go up a little, and sales slowed (although this could be partly due to the time of year).  And there was a post on Abby Glassenberg's blog, While She Naps, titled 'When The Product Is The Problem'.  The thrust of it is that while you might be able to sell some of your products, there may well simply not be enough of a market for them, to make it a sustainable business.

"Some handmade items are incredibly time-consuming to create and have to be priced higher than the market can bear.  And sometimes the handmade item itself is not made in a quality way or with quality materials.  I think there's a market out there for almost everything, but that market might be so small that it can't sustain a business.  Or it might be very difficult to reach."

This is of course, absolutely true - although I do struggle with the implications of the argument.  It would seem to suggest that I should have taken those negative comments at craft fairs seriously, rather than thinking about how to get beyond them and focus on the people that are actually potential customers. However, it was a very useful article and did make one thing crystal clear to me.  It is not possible for me to make a viable business out of making and selling stuffed animals.

It's rather difficult to know where to go from there - I am suddenly standing here empty-handed.  Teddy bear making skills are not particularly transferrable.  I do have other qualifications, but none of the all-important experience.

Anyway, after moping for a while, I applied for a part-time job as a washer-upper in a local restaurant to tide me over.  It was amazingly good fun.  :-)  Possibly a bit too part-time - but its certainly given me something to think about.

Of course, I will continue to make bears and other creatures (I have two big shows booked this year), and I'm still determined to give the patterns a try.  At the moment, I am sitting at home trying to get a new design off the ground.  He's proving rather tricky!  Here is what he looks like at the moment.  Any guesses?  :-) 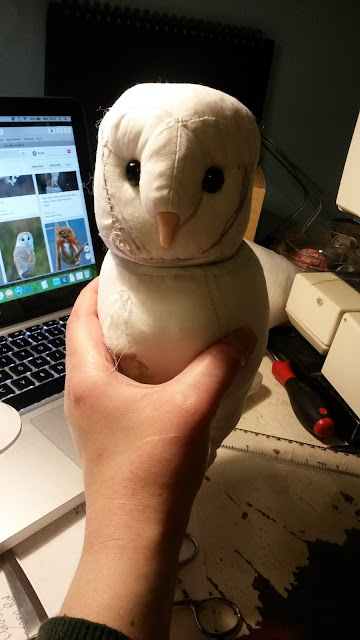 And I haven't introduced my new bear yet, have I?  The blonde bear is called Lenny, and he is 17 inches from ears to toes, and now available in my Etsy shop!

Anyway, back now to the job-hunting, and the new design and the almost but-not-quite sneezing! 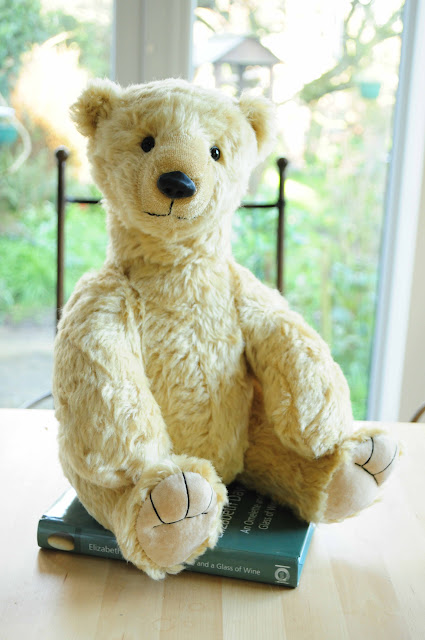 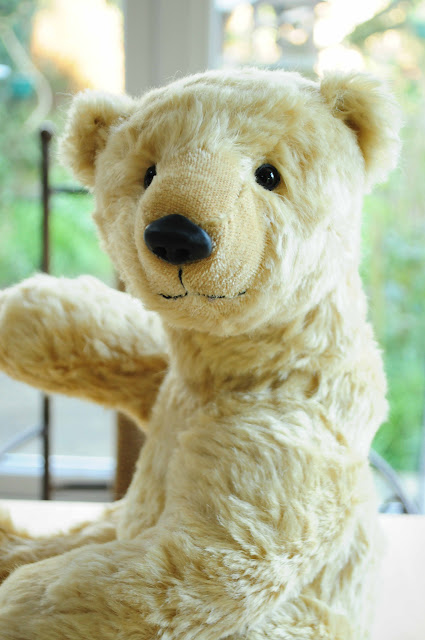 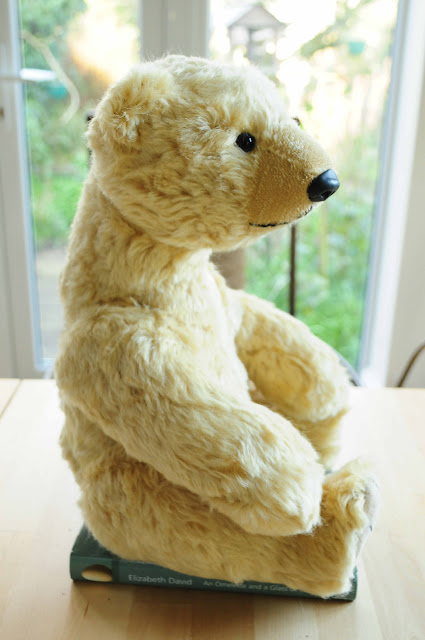 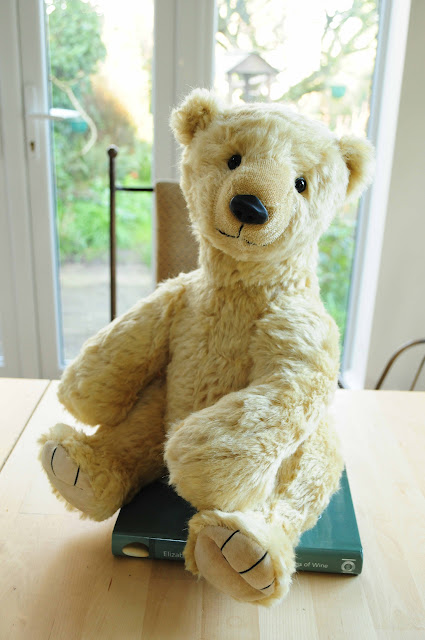 I have often thought there could be a great market for accessories for stuffed animals, hats, jackets, sweaters, swords, all that. In a mass market world, hand made personalization send to be in style.
-- Rebecca

Hi Rebecca. Yes, I think you're right - there probably is a market. I'm not sure handmade is necessarily best though. Somebody once sent me a perfect little bear-sized replica of a wheelchair from the US store, 'American Girl'. It was absolutely incredible, and everyone commented on it. It could never have been made by hand though.

Hi - I am visiting from Abby's blog (she mentioned this post in a newsletter) and I think your bear designs are really charming. I am surprised that you have not made patterns to make them. I know it is a hard process, but it seems to be a natural extension of your knowledge and skills. Maybe considering which of your bears have sold the best and starting from there?

Hi Jenni - thank you for that. There is a bear pattern in the works but it takes a while(!) Definitely worth a try though.