Last Wednesday we went out to eat at Grain in Colchester.  We have been there before, and loved it.  It's the kind of place where it's handy to have your phone to Google menu ingredients - I think I've tried more new things there than anywhere else.  And when I leave, I'm still thinking 'what the hell was that herb?'  It's interesting food.

We were very, very, very upset to have missed their lockdown doughnuts.  (And that's putting it mildly.)  But it was lovely to go back.  This isn't a review; I just like to post the photos to remind myself.  However, if you're near Colchester and you haven't been, definitely go!

So, we had really good sourdough bread... 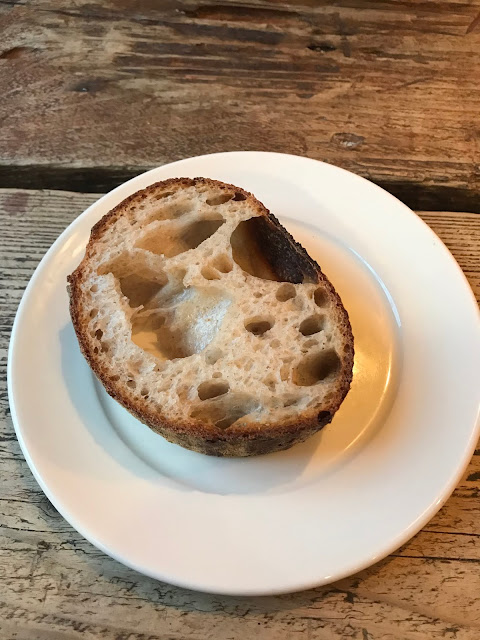 Crispy potato terrine, cheddar custard, and sweet and sour tomato - which I was really, really enjoying (dish of the night, for me) until someone said 'yeah, it's like a big hash brown', which took a little of the gloss off of it. 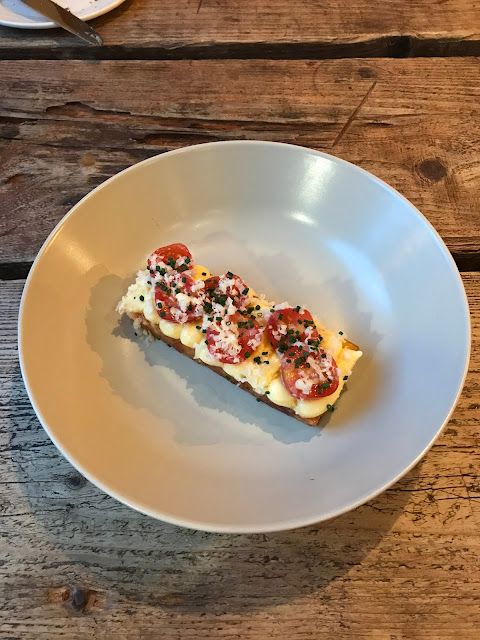 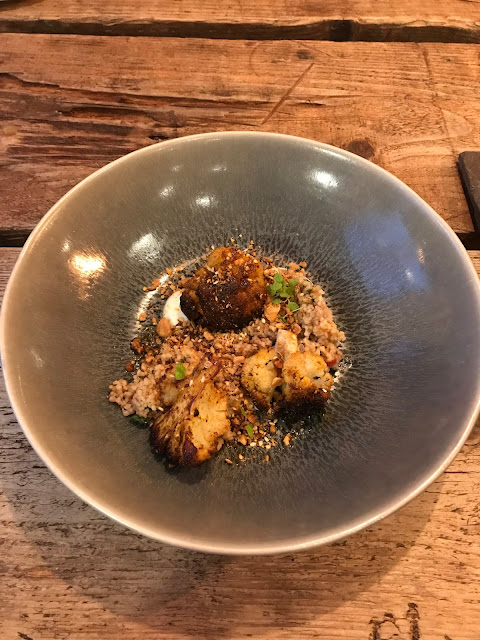 Goat's cheese agnolotti, girolle mushrooms, and broad beans.  This was really interesting.  I've never tried agnolotti before.  They struck me as a cross between pasta and gnocchi - a bit like ravioli but less purse-like (if you know what I mean) - quite tightly wrapped.  I always want to try gnocchi when I see it on a menu, and I always come away disappointed - I think I'm just not a gnocchi person - it invariably seems bland and doughy.  This had more filling to dough, and it wasn't soggy at all - in fact, on it's own it was quite dry (in a good way!).  Anyway, I've had some disasters trying to make gnocchi at home; I might see if I can find a recipe for this instead. 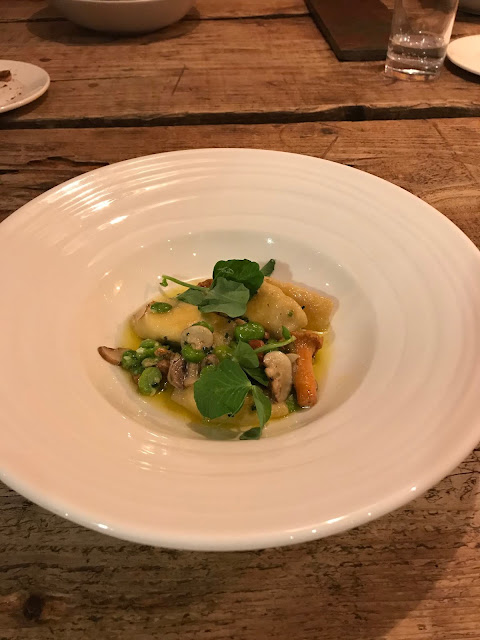 Local beetroot gazpacho, tarragon, wasabi creme fraiche.  This wasn't one of mine, but I'm told it was delicious. 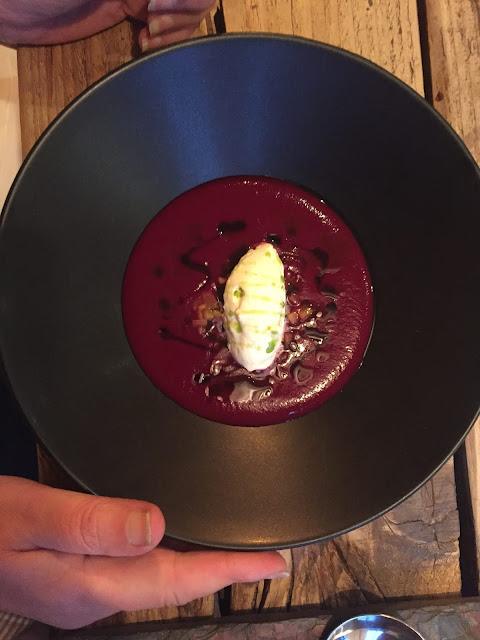 Pan-roasted salmon, baby gem, warm tartare sauce.  As above, not one of mine, but apparently it was lovely.  In my very limited experience of fish dishes, I've never seen tartare sauce served runny like this.  I've only ever seen it like a mayonnaise. 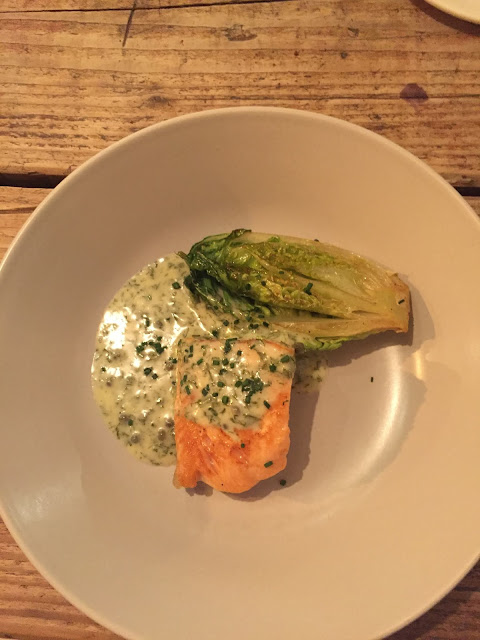 Warm almond cake, peach, biscoff ice cream, white chocolate.  Two of my very favourite things - almond cake and peaches!  Whenever I bake almond cake, I always agonise over how moist the crumb is.  Is it properly cooked; should it have a bit longer in the oven?  My efforts usually look borderline under-cooked - although they still go down well. The crumb of this one was perfect, although I thought the outside was a little dry.  The 'crisp'-looking thing with almonds tasted like Caramac, and I've no idea what biscoff is  but at any rate, the ice cream was delicious! 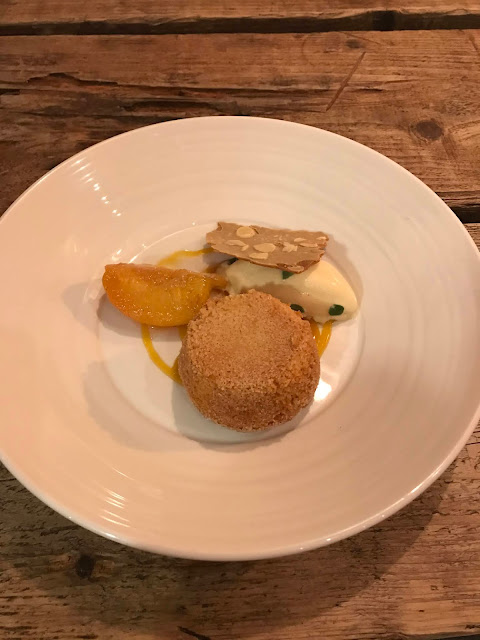 Dark chocolate tart, yuzu, coconut yoghurt sorbet.  One of my fellow-diners (one of my 'party'?  My 'eating companions'?  My aunt, at any rate) had this, and really enjoyed it.  When I worked as a commis chef, I remember making dark chocolate tart, and experimenting with it to try and get it right.  Unfortunately - like gnocchi - it's just not my thing.  It's weird because I'm not a fan of brownies either, but I developed very strong opinions on how those should be made.  Somehow the chocolate in this is just too rich and too much for me.  I think I did try making them with milk chocolate, but it just doesn't work somehow - all you can taste is sugar, not chocolate.  I remember having problems with texture too.  The desserts were kept in the fridge until someone ordered one, so the chocolate would go rather firm.  This one, apparently, had a cheesecake-like texture, which sounds great.  Presumably the knack of it is to get them out of the fridge a little while before service to allow them to soften - but then, after a two-hour service, under the food safety regulations you presumably have to throw them out?

I remember now, talking about this, why I wanted to be a chef - I always liked the tricksy stuff.  Unfortunately, chefs are actually quite practical people. 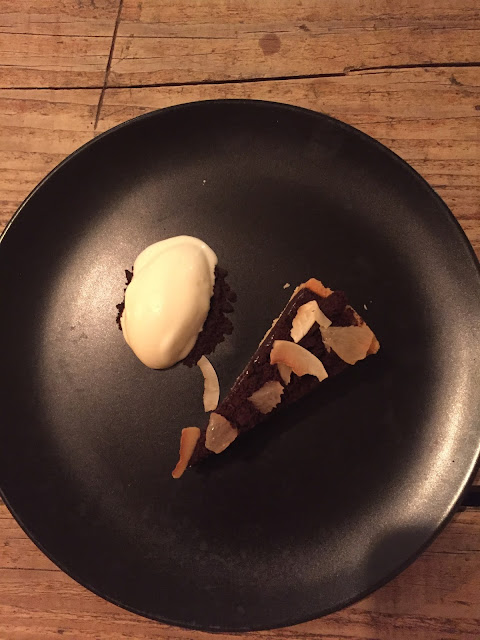 Finally, because I was really chuffed with it, here is a photo of an almond cake I made - a Bakewell tart from Felicity Cloake's recipe.  (Full disclosure: I used my wonderful Nikon D300 to take this photo; the others were taken on my phone.)  It came out pretty good - half-way between an ordinary sponge cake and the kind of very moist, 'almost to the point of being under-cooked' cake I usually make.  And my panel of testers liked the pastry, which was very, very flaky, and I felt lacked body somehow. 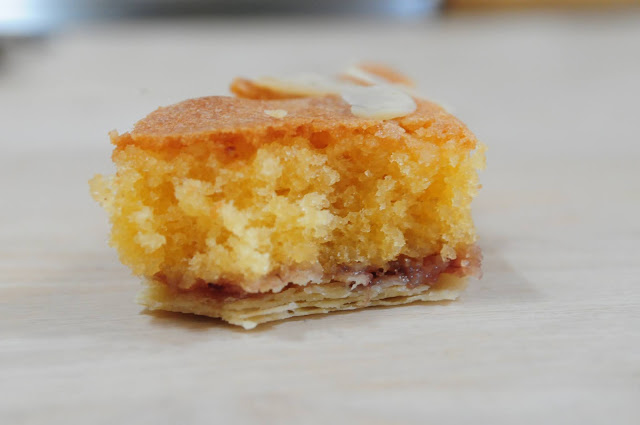