I've kept meaning to research cheesecake recipes.  When I was a commis chef (briefly), I used to make Mary Berry's no-bake raspberry and white chocolate cheesecake, which was reasonably popular (although it might just have been cheesecake that was popular - rather than our cheesecake).  The process was  problematic enough to make me want to trial it to death (for example, the white chocolate was very prone to splitting) but in some ways - although most of the cheesecakes I've seen have been of the no-bake variety -  they seem like a bit of a cheat; just a pile of cream on top of some crumbled biscuit.  The real Golden Girls magic surely only happens with a baked cheesecake.

There seem to be countless recipes - all different - with little to help you choose between them.  The only thing to be done apparently, is dive in and try them(!)  This is the Michel Roux version.  A lot of his recipes seem far too pristine and elaborate to be realistic, but I can vouch for his tiramisu recipe and it was only by reading him that I figured out how to make white chocolate mousse go right, so I figured he was a good solid place to start with cheesecake.

I was well impressed when I got it out of the tin! Look at that colour. 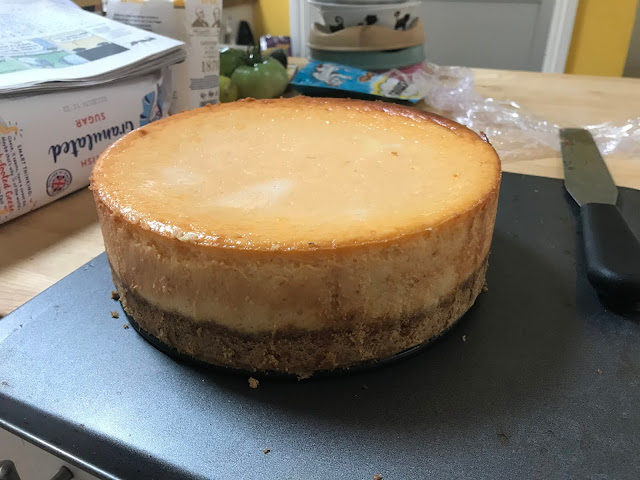 However, I have to try to forget that it requires a whacking kilogram of cream cheese, which makes me feel slightly nauseous just thinking about it.  I'm not entirely sure how we're going to get through this: it is bloody enormous.  I remember someone else saying that about New York cheesecakes: they're very deep.  With this one, it could have been deeper.  I left out a little of the biscuit, and even then, I didn't manage to fit all the filling in to the tin.  I could probably cut all the ingredients equally by a quarter and end up with something a lot more manageable.  (I do like the proportion of biscuit to filling here though.) 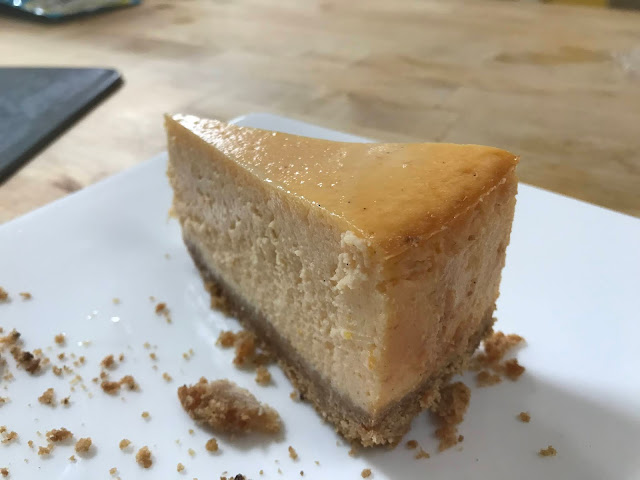 It tasted alright.  Two problems.  One was in the cooking.  Roux suggests 12 minutes at 200 degrees, then an hour at 100.  I assume this is for a conventional oven.  I took the usual 20 degrees off for a fan oven, and the cooking time didn't seem to be nearly enough.  I ended up giving it an extra 20 minutes, then increasing the temperature and giving it yet another 20 minutes.

Dan Lepard's  recipe suggests baking at 130 degrees fan, for up to 90 minutes, so perhaps my timings weren't terribly excessive.

On the other hand, I've a suspicion it was slightly over-cooked.  You're supposed to bake it until it just wobbles slightly in the centre, like a creme brûlée - and presumably any other set custard product.  That's fine, but it really is a question of degree.  It was wobbling after Roux's recommended time (but, I imagined, perhaps disguising something more liquid underneath) and still wobbling 40 minutes later.  The final result - after cooling it slowly and refrigerating over night - is fairly firm and not, I think, as smooth as it should be.

Perhaps I should try sticking to Roux's suggested time.  It's a lot of ingredients to waste if it isn't properly baked, but texture seems to be all important with cheesecake, so it's probably worth a shot.

The other problem mentioned is the base.  I've found this before: it always tastes like yesterday's biscuits - which of course it is, but in a cheesecake, you'd hope you wouldn't get that impression.  My other tester reckoned the base wasn't quite crunchy enough, so maybe I just needed to cook it for a little longer.