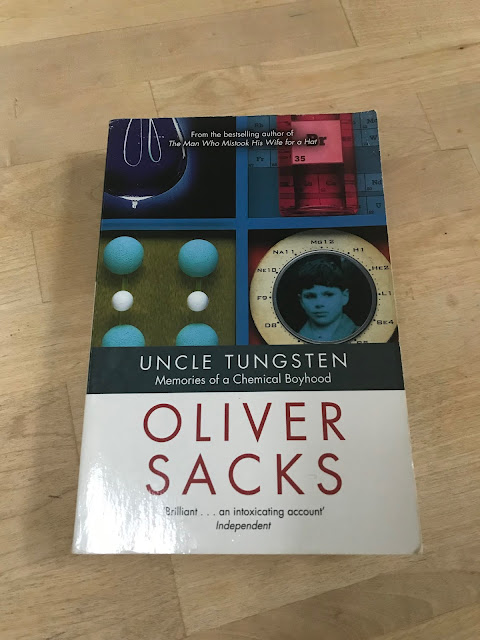 I heard about this book on Radio 4's 'A Good Read' programme.  I remember one of the guests, when asked whether they enjoyed it, saying no, not really - *deep sigh* - 'all that stuff about elements...'  I'm not very good with science but I wanted to read this anyway because I'm interested in Oliver Sacks.  The Man Who Mistook His Wife For A Hat has been on our bookshelf at home since I was a kid.  Also, on the radio programme, they talked about Sack's horrible experiences at boarding school, which is a subject which seems to come up repeatedly in my reading, for some reason.
They weren't exaggerating about the chemistry content.  The majority of the book covers Sack's interest in chemistry - both how he was introduced to it as a child, and its historical development as a field of study.  It wasn't exactly inaccessible, but I did find myself glazing over quite a lot.  About three quarters of the way through, I finally started taking a more selective approach.
Sacks has a fascinating family.  Like Edmund de Waal, his ancestry is Russian and Jewish.  There is an amazing photograph of his grandparents sitting on the lawn in the garden of their big house in Highbury New Park, looking very dignified and old-fashioned and surrounded by thirteen of their [eighteen] children.  Sacks's grandfather seems to have been an incredibly clever man, with a long list of proficiencies, patents, credits to his name, and all his children - sons and daughters - went on to work.  Sacks's mother became a surgeon - this must have been in the 1920s sometime - and of his aunts, two were teachers and two founded schools themselves.  It all seems incredibly high-achieving - although Sacks writes about it as though it were entirely normal.  It is interesting to reflect back on how British feminism, around the turn of the century, was affected by the influx of immigrant families who, for various reasons, may have taken a more generous approach to working women and the education of girls.
Unfortunately, the family content of the book is only tiny, and it seems partial and unfinished.  For example, Sacks talks about his brother Michael who, as child, became psychotic. (p.186-6)  The subject is not revisited, so we never find out what happened to him.  However, Sacks has written lots of other books, including at least one that was autobiographical, so I shall definitely go on to read more. 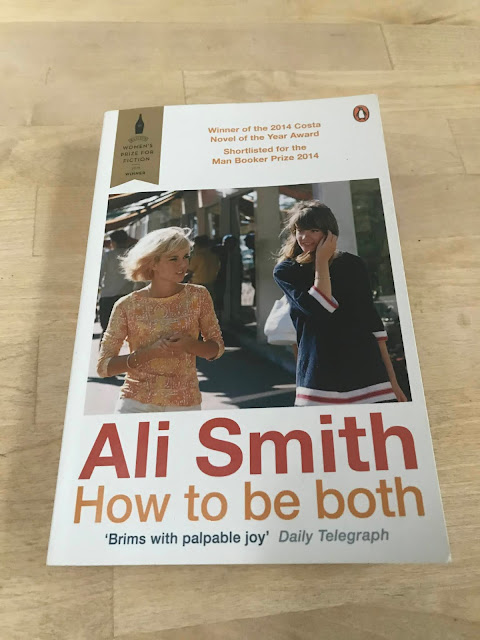 This is a book about a girl grieving for the death of her mother, and researching particular fifteenth century Italian paintings her mother liked and then, about a third of the way through, the narration is taken over by the Italian painter's... ghost? spirit?  It's quite a strange idea.
It also took me a little while to get used to Smith's writing style - the lack of speech marks and other punctuation; the way she stops sometimes in the middle of a word (I'm still trying to work that one out); the expressive, sometimes very lengthy, parentheses; the cutting back and forth between moments in time; the use of real artworks, pop stars, cultural references.  I think I came to like all this...?!  The girl, the protagonist, is rather sad but her mother, through her memories, comes across as quite a character.
I liked also the fluidity of gender and sexuality in the book - although I found it a little strange how universal it was.  It wasn't ascribed to just one person - it seemed to apply, in some form or another, to all of the female characters.  I suppose in some respects the book is quite radical - not so much in it's inclusion of androgyny and different sexualities - but in the way it normalises them.
It's a book which creates mysteries and declines to sort them out (paving the way for a sequel perhaps!?) - so we never find out what Lisa Goliard was up to - if anything.  So too, George's truancy (at the age of 16, when she must have been facing GCSEs), her secret use of her mother's bank card, her relentless campaign of surveillance, all seem to suggest a rather pessimistic denouement, somewhere beyond the end of the book (like in The God of Small Things, where things can only go downhill from the last page), which was sort of treated as beside the point, but which I found quite difficult to ignore. 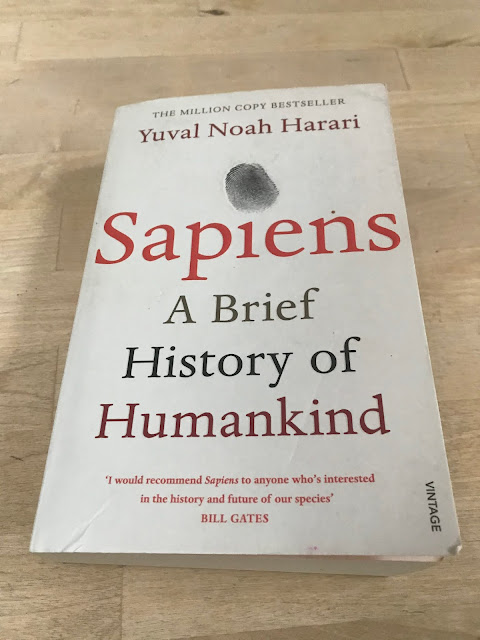