I haven't written much about going vegan (in fact, I haven't been doing very well with the blog at all lately) and blogging about food with spur-of-the-moment, unstylized, mobile phone photos is probably a mistake; photos are everything when it comes to food blogging, even if some people manage to make their gorgeous photos look completely effortless.

Nonetheless... I am going to post my terrible photos anyway!

Tonight I had my first go at making a vegan cheese sauce.  What I would really like to do is to replicate the cauliflower cheese pies from Higgidy, that we used to eat (and occasionally still sneakily do), but one thing at a time - I wanted to try to get the cheese sauce down first.

I was loosely following the idea in this recipe (all inadequacies are of course my own) - i.e. making a bechamel as you would usually, but with non-dairy fat, and vegan milk, then adding mustard and seasoning and nutritional yeast.  I used almond milk, and olive oil-based vegan butter. 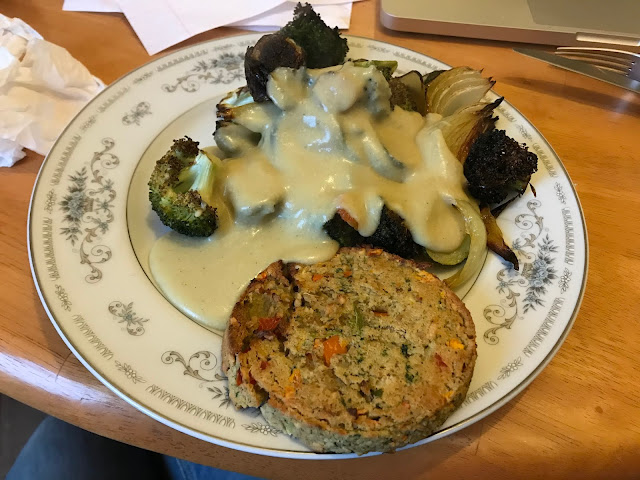 In many respect, it did exactly what it was supposed to.  The floury taste had to be cooked out of course, but it thickened quickly when it came to a simmer, and it had a lovely shine to it(!)  However, the colour was unappetizing, and the taste disappointingly mild.  I would have kept adding the nutritional yeast, but although I do actually like the flavour and could eat it by the spoonful on its own, I don't think it really does the trick when you're trying to make something that tastes like a cheese sauce.  Adding more wouldn't have helped.  Really, it needed something with a bit more sting to it.  I used to think that nutritional yeast tasted a bit like marmite, and actually a couple of spoons of marmite would have done wonders for the flavour.  But it still wouldn't have tasted like a cheese sauce.
Other recipes I've found online suggest using vegan cheese in place of nutritional yeast - this one, for example.
I am slightly worried about this.  I'm not at all joking when I say that you have to handle vegan cheese with kid gloves.  It took me months to get used to the flavour - not the stuff that tastes mildly of coconut, but the mature cheddar substitute which is really like something scraped out of the back recesses of Satan's refrigerator.  Even once... acclimatised... to the smell, you have to get used to its textural peculiarities.  It is very difficult to crisp up.  When laid over the top of some dish and gratinated, it goes slightly brown on the surface, and then weirdly smooth and creamy underneath.  Somebody said to me that the bit underneath reminded them of those foil-wrapped cheese triangles, and that probably describes it as well as anything.  Only once did I manage to get it crispy: I was struggling to get used to a new, more powerful oven, and at the same time I had arranged to take delivery of my new sofa just before dinner.  It took longer than expected to make the sofa feel at home, and by the time I got back to the oven, the veg was soggy and the ratatouille was almost black.  But the cheese was good.
So, yes, the prospect of melting it in a sauce concerns me slightly.  It's worth a shot though, because I didn't think the nutritional yeast version worked very well.
Actually, in a pie, it might be fine.  I think, more than I realised, the taste of cauliflower cheese comes from the roasted cauliflower.  With a sauce that was there merely for lubrication, it might still be reminiscent of cauliflower cheese.
By the way, can I just say that that thing in the foreground of the photo is a Tesco nut burger and, dry and uninviting as it looks, they're actually very nice!
Tomorrow, for the birthday of my aunt (who's favourite dessert is lime meringue pie), I'm going to make... vegan(ish) madeleines!  Madeleines, because a madeleine tin is the only cake tin I possess at the moment.  Vegan(ish), because I'll be using duck eggs - albeit from ducks that I know are genuinely free range, since they live in my sister's garden.  I'm only vegan for animal welfare reasons.  I might, or might not, post a photo, depending on how well they turn out!