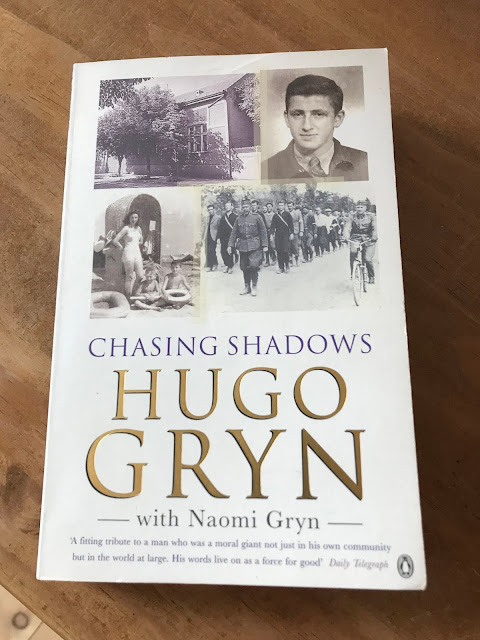 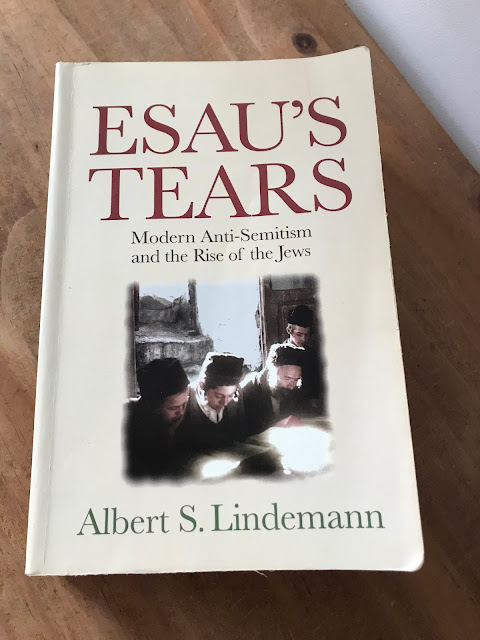 Esau’s Tears: Modern Anti-Semitism and the Rise of the Jews, by Albert S. Lindemann, Cambridge University Press (2000).
When I was at university, I did a module on anti-Semitism, and this was the key text.  As far as I remember, they stopped short of insisting that everyone read it – stating simply that certain chapters would be up for discussion on certain days.  I remember at the time, being incredibly impressed by it (I bought it, didn’t I?), but at the same time finding the idea that I could read a whole, large, densely-academic book for a single module, quite impossible.  It wasn’t only that we had various modules (all with their own long book lists), and only a matter of days to get the required reading done, but also that I was living alone for the first time – struggling with loneliness and enforced sociability with people I didn’t have much in common with, and unfamiliar practicalities such as feeding myself, laundry, cleaning, managing my own time and money.  For most of my time at college, I think the major portion of my energy went into such mundane things.  Looking back, it’s clear that reading this should have been non-negotiable – and I should have read a whole lot more besides!  But, better late than never I suppose.
Albert Lindemann enters into this subject extremely cautiously, as if into a minefield, whilst at the same time clearly having some vexations of his own to vent.  The field is marred, he argues, by a lack of scholarly thoroughness.  Looking at some of the late nineteenth century writers for example, who have apparently been presented as the predecessors of the Nazis for their antisemitic pronouncements, he argues that their positions were more nuanced than previously suggested.  Many of them would have been horrified by the thought that violence against Jewish people might in any way have been considered justifiable.
In particular, Lindemann takes issue with two ideas that he says characterize previous scholarship.  Firstly, the idea that antisemitism is a completely irrational ethos, entirely divorced from reality, and usually found in people who have no contact at all with Jewish people.  Secondly, the idea that talking about ‘the rise of the Jews’ is somehow dangerous, and plays into the hands of antisemites.  On the contrary, he says, Germany did have a large number of Jews compared to countries like Britain and France; as a group, Jews did do well in the late nineteenth century; they were overrepresented in particular professions.
The picture that arises from Lindemann’s analysis of pre-1914 Germany and its Jewish population was, for me, entirely new.  He describes a quite lively debate over the issue of Jewish assimilation, and a certain confidence, even arrogance, and a spirit of criticism among Jewish writers which caused much irritation among some of their Gentile counterparts.  Those Jewish responses to antisemitism that I have seen have always centred around the horror of the Holocaust, so it was fascinating to see a different perspective.
It was interesting, (and often quite embarrassing) reading the marginal notes I wrote as a student.  One of the few things I agree with my twenty-year-old self about is that Lindemann’s discussion of antisemitism, and relations between Jews and Gentiles, creates quite a strange, indeed almost racist atmosphere – ‘racist’ in the sense of suggesting some kind of innate, determinative difference.  The subject matter means that, from the outset, Jews and Gentiles are divided, and treated as quite separate groups.  And whilst Lindemann starts out with the premise that today we don’t find any significant difference in ‘race’, in discussing a society where apparently everyone did, the objective (or modern) disregard for race is not always a key part of the discussion.
This strangeness is intensified by Lindemann’s tendency to talk about ‘kinds’ of people, as though social tendencies are somehow integral and permanent.  For example, on p.233, he refers to ‘those members of society prone to violence and vandalism on the streets’, and on p.234, he says that ‘Captain Dreyfus’s story has been too tempting, too appealing to the popular, vulgarizing kind of historian’.
So too, there was something a little odd, I thought, about Lindemann’s attempts to refute the idea that antisemitism was based on fantasy and had little to do with Jews themselves.  ‘It is particularly inaccurate and misleading,’ he says, ‘to insist that these anti-Jewish leaders were lashing out at targets they knew nothing about.  Nearly all of the prominent anti-Semites of these years had regular, even intimate contacts with Jews… Von Treitschke’s ire at Graetz’s writings was hardly the result of baseless fantasies, and Goldwyn Smith’s anger at Disraeli was based on the fact that Disraeli had mocked him.  Smith and others who attacked Disraeli in anti-semitic language also simply differed with Disraeli on political and foreign policy issues.’ (p.271) But there is a world of difference surely, between one man disliking another simply for personal or political reasons, and his extending that dislike to an enormous group of people who he feels must share the characteristics of the one.  Lindemann has explained the first position, but not the second; even after his analysis, it is still perfectly sensible to say that antisemitism has little to do with Jewish people as a group.
I loved the territorial breadth of this book, and the temporal breadth.  By discussing the situation of Jewish people in Europe before the First World War, it felt like the book filled in the missing first half of the story.  I thought that it gained something by not centring directly on the Nazis – although obviously the Holocaust was still a dominant presence.  I also loved that academic thing where the writer begins by reviewing the field of study as a whole and evaluating its weaknesses.  It does seem strange that the book has no bibliography though. 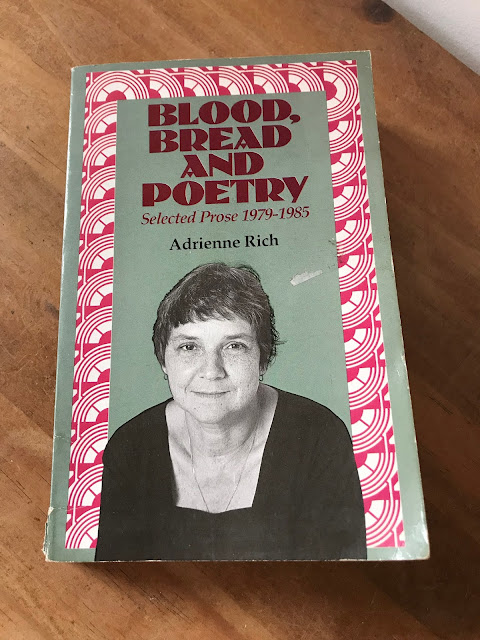 Blood, Bread and Poetry: Selected Prose 1979-1985, by Adrienne Rich, Virago Press (1987).
Back in college (and not reading my course texts), I collected books on the women’s movement.  The second-hand bookshops of York were apparently hotbeds of second-wave feminism, so I had lots of books published in the 1970s.  I didn’t read many of them (this was my non-reading period) – it just seemed important to keep them.  I bought this book back then.  I had heard of Adrienne Rich elsewhere but I was not (am still not) familiar with her poetry.
I do really like her prose writing though.  She has both sincerity and authority about her, and although the book was in parts particularly dense and theoretical, there were many moments of wonderful clarity.
One thing that struck me quite forcibly was her discussion of racism within the feminist movement.  Rich grew up in the American South, and the issue seems to have been one of immediate importance to her.  It surprised me how much of the language and argument she uses has echoes in the Black Lives Matter movement today. She talks about intersectionality and ‘having work to do’ within herself, and the term ‘anti-racism’ crops up repeatedly. (p.82-84) For some reason, I had assumed these were modern phrases.  It made visible the links between academic work and popular movements, that I hadn’t appreciated before.
I found Rich very pragmatic and helpful on a subject which, sometimes, there doesn’t seem to be any way of addressing at all. ‘I have come to wonder,’ she writes, ‘if guilt, with its connotations of being emotionally overwhelmed and bullied, or paralysed, is not more a form of defensive resentment or self-protection than an authentic response to the past and its warts… I would like to ask every white woman who feels that her guilt is being provoked in discussions of racism to consider what uses she has for this guilt and how it uses her, and to decide for herself if a guilt-ridden feminism… sounds like a viable way of life.’ (p.82) In other words, whilst we should all be trying to ‘unlearn the norm of universal whiteness’, as she puts it elsewhere, guilt is not a particularly productive response.
In ‘Towards a More Feminist Criticism’, she has this to say.  ‘No one is suggesting that the women with all or many of the privileges of white skin, heterosexuality, class background is thereby disqualified from writing and criticizing.  However, I believe she has a responsibility not to read, think, write, and act as if all women had the same privileges, or to assume that privilege confers some special vision.  She has a responsibility to be as clear as possible about the compromises she makes, about her own fear and trembling as she sits down to write; to admit her limitations when she picks up work by women who write from a very different culture and sourcement [sic?], to admit to feelings of confusion and being out of her depth.’ (p.95) It makes perfect sense.  My reservation would be that several things I have read recently suggest that it has been characteristic of women particularly, to hedge their words, temper them with qualifications and apologies, anything to soften their impact and avoid causing offence.  I suppose the subject matter makes all the difference.
Coincidentally, having just read two books about antisemitism and the Holocaust, it turns out that Rich was also Jewish, and the book includes several essays where she examines her Jewish identity.  It’s quite a sad story of her father, who was an assimilated Jew, and had nothing to tell her on the subject.  When she went, by herself, to watch newsreels of the Allied liberation of the German concentration camps, her parents were not pleased, and she was unable to discuss it with them.  When she herself married a man from an orthodox, eastern European Jewish family, her father saw it as a betrayal and refused to attend the wedding.  She talks about how the women in her family were urged, particularly, to be quietly spoken – anything too flamboyant or aggressive would be seen as Jewish.
I think this is one of the things I really liked about the book – this mix of the personal with the political and academic.
Posted by Ruth at 18:08