Hmmm, Poinsettia - is that how you spell it?
Anyway, I have finally finished my next bear!  She is a bit of a strange one - but I am really proud of her, for lots of reasons.  I started out with the aim of altering my panda design.  I was really happy with Benjamin, but I thought he would look more panda-like (in terms of demeanor) if he were leaning back more.
So, I was making a cotton prototype of the new leaning-back design.  It took absolutely ages to get right, because of the weighting.  The head is the heaviest part, and usually I would put bags of steel shot in the feet to counter-balance that.  With the new design though, the head was so far back, that wasn't sufficient: she was still over-balancing.  I tried loads of things.  Eventually, I ended up with steel shot in the feet, steel shot in the stomach, and using an extra-lightweight stuffing in her head, neck, arms and upper body.  And her feet still sometimes don't touch the floor!
But she no longer over-balances, so I decided that I was happy with that - the feet-in-the-air-thing just seems to add to the nonchalant panda pose.
Anyway, having made this cotton model, it was so sweet, I thought I really ought to make her into a proper, full-colour bear.  First I patched her body all over in recycled denim, so she has this really cute blue onsie.  Then I thought she ought to have a jacket.  I'm really chuffed with how it turned out.  It is the first item of clothing I've ever made (for a bear, or anyone else).  Usually my mother makes the clothing, but she's a bit tied up right now.  It took me about twenty tries - and that's no exaggeration - but I think I finally got it right.
Anyway, she was left with a very white face, hands and feet, which looked wrong, so I ended up patching the body over with yellow cotton.  This gave me a chance to cover up all her original seams (although she'll be a nightmare to repair, should she ever need it) and to give her wrinkles behind her ears (see last pic), which is a feature I always wanted to try.  Glass eyes, clay nose, embroidered mouth... I think she turned out really well.  In case I forget to measure her later, she is almost exactly 11 inches, sitting.
There are a few disadvantages to the patching technique.  Because I didn't turn any edges in, I had to fray check them all, which has left her a bit... crispy?  And I expect the fabric will continue to fray a little bit - even with the fray check - so she will look tattier and tattier as time goes on.  And, because I patched her after she was jointed and finished, there are necessarily areas where the white cotton shows - particularly around the joints.
I don't think that's a problem for her though: she is an 'odd'-looking bear - I think that's just part of her character.  It is nice to create something that looks (and indeed, is) a bit experimental.  We'll see if anyone likes her.  In the meantime, it's onto the proper leaning-back panda! 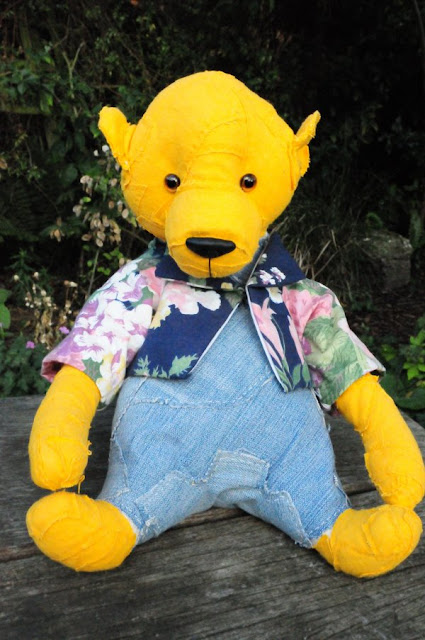 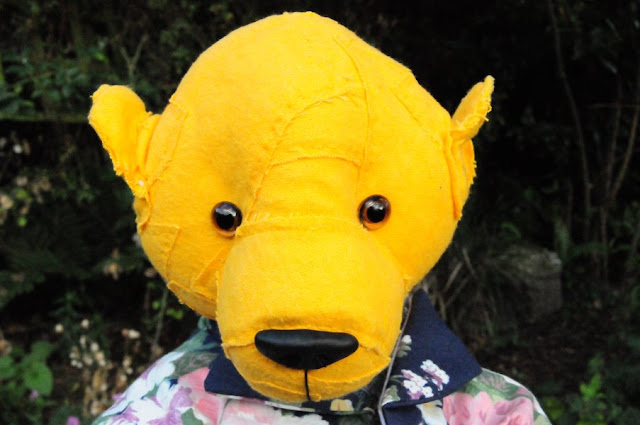 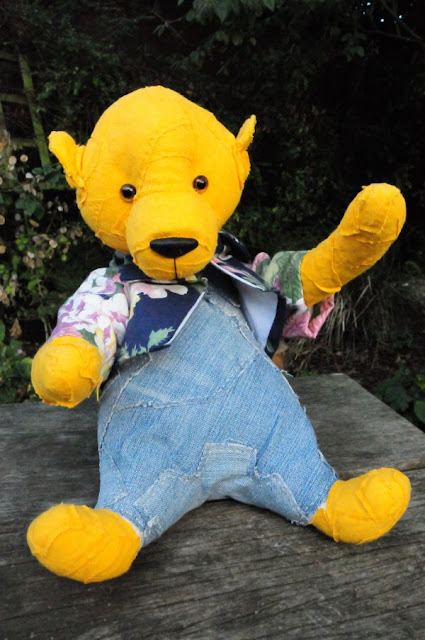 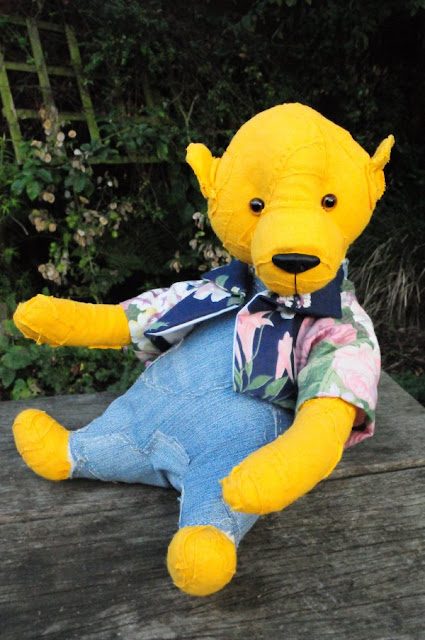 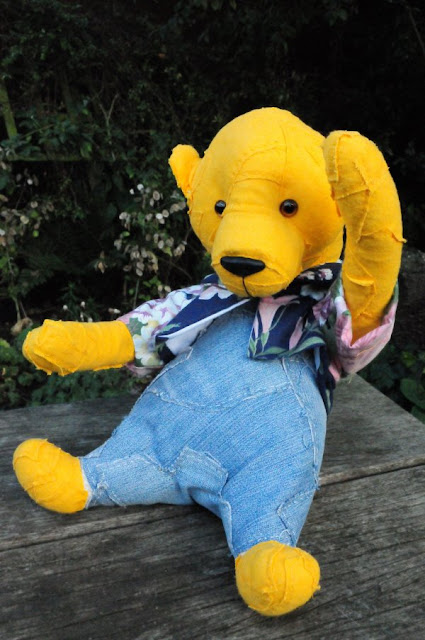 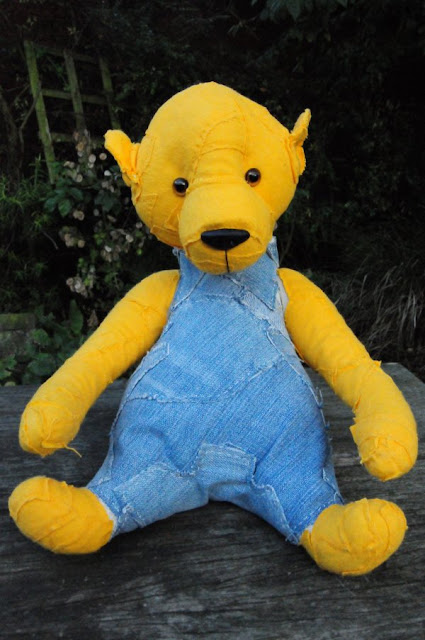 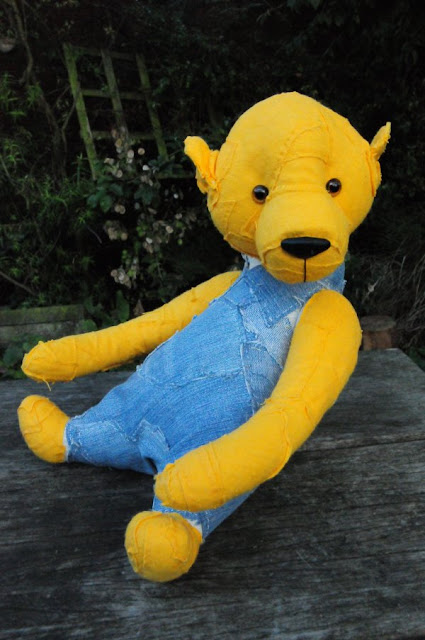 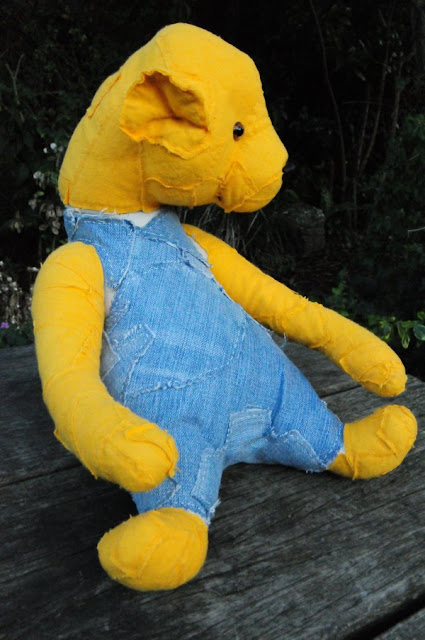 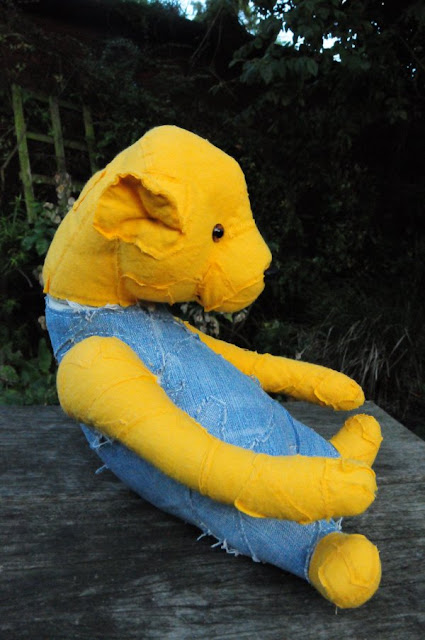 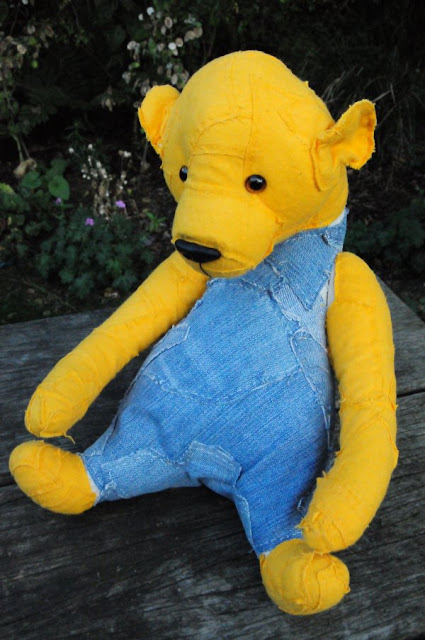 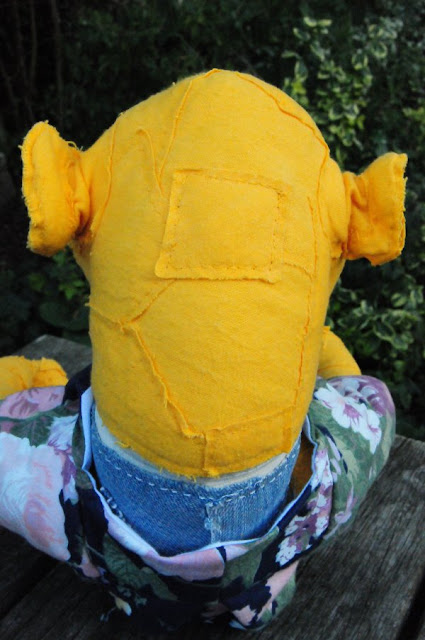 Well, it's a bit of a weird one, I'll give you that, but is still quite sweet, the ear-wrinkles are cool!
Have you decided if you're coming over here yet?
Rachel

Thankyou. I don't think I'm going to be able to afford to come over - and I REALLY wanted to go to Seattle! Perhaps another time? In 10 years time, when I can afford it (sniff)?

Fine, if that's the way you feel...sniff!
S'okay, when you eventually get the wherewithal, we'll make it to a festival there or something, or maybe to a rodeo or something - apparently bumbershoot (I think that's it) is supposed to be quite good.

What kind of festivals do they have in Seattle? And why would we want to go to a rodeo?! I would like to go to Pike Place Market - which is the only place in Seattle I know of.

Time you look up a little more about seattle, they have some great music festivals, and I don't know, I'd really like to see a rodeo sometime, we haven't managed it this time and my exams are at the end of next week, so it's a little hairy right now.
I'll look up some vintage places for you also...