Good morning!  There's a charity coffee morning at the Methodist church in the village where I live today.  My mother always makes scones for them, so this time round I thought I'd try making a few cakes.  All my recipes are from Mary Berry, but the first one - for a ginger cake - is only to be found online.  I'm not sure why it never made it into her fantastic Ultimate Cake Book - perhaps I'm about to find out(!)  The online reviews suggest that it's nice, but mild - and she herself wrote that the flavour develops over a couple of days.  I didn't quite have a couple of days, but I made it yesterday, so it at least had overnight to... marinate?  Mature?  Steep?  I'm not sure what the correct term is.  Anyway, it looked great.  The top cracked but it was a healthy-looking, too-big-for-the-tin kind of crack - I'm good with that.

I'd never tried this recipe before, but because I was making it a day in advance, I felt fairly safe in that, if it all went terribly wrong, there'd be time to make a replacement (if not actually another ginger cake) before this morning. 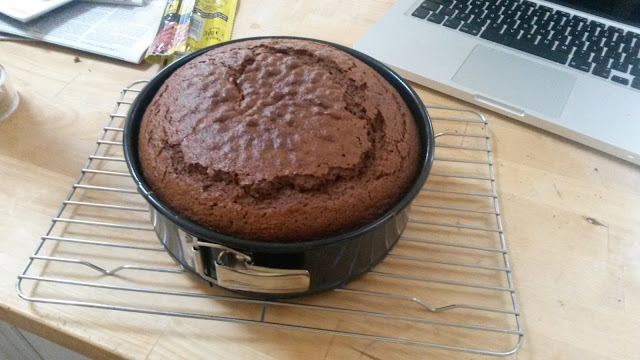 The second cake - made last night - I have tried before, and it was really good, albeit imperfectly cooked by me.  It's an apple and cinnamon cake from the Ultimate Cake Book.  The sponge has walnuts and sultanas in it, and you put a layer of shredded apple and cinnamon in the middle , so it's texturally interesting as well as being delicious.  Last time I under-cooked it and it sank slightly.  I haven't quite got the hang of converting conventional oven times and temperatures to suit our fan oven.  The general idea seems to be that you lower the temperature by 20 degrees, but sometimes it seems like an extra 10-20 minutes is needed as well.

Anyway, I gave this one 10 minutes extra and I was really pleased with it when it came out of the oven.  It cooled for a while on the counter and still looked fabulous.  I removed the tin - all good.  When I got up this morning though, it had dipped in the middle - not by much, but it was rather disappointing.  Then, when I was rushing around panicking about the third cake, I decided on the spur of the moment that this one would look better with a dusting of icing sugar.  Unfortunately it just made it look like it had mould growing on the top(!)  So not a great success.  Hopefully, it will taste alright though - if anyone decides to brave it. 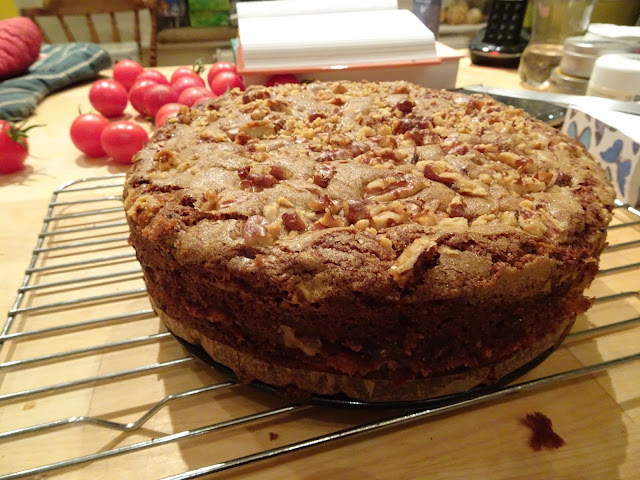 I wanted to try a third cake, and someone suggested that a traybake would be good for a coffee morning, so I had a go at Mary Berry's iced chocolate traybake.  The cake came out looking lovely, but something went amiss with the icing.  Incorporating just half of the icing sugar required in the recipe turned it into a thick paste that was never going to be pourable (which was the next instruction).  I added hot water to make it pourable but half an hour later, when someone turned up at the door to collect everything, it still hadn't set.  Maybe the melted chocolate wasn't hot enough - and therefore liquid enough - for all that icing sugar?

My instinct in this situation was to throw a tea towel over the traybake and say 'Yes, I have made TWO cakes!' My mother took the opposite tack though and said very loudly, 'What about the chocolate cake?  Is the chocolate cake ready?'  So I had to shamefacedly remove the tea towel and dig around in wet icing, trying to come up with some reasonably neat squares of cake.  The lady who had been sent to collect them retreated politely to wait in her car.

To give it its due, the cake held up really well to my excavation efforts and the icing - although I had it smeared over everyone and everything by the end - was that self-leveling kind that always seems to remain smooth on top, so the end result wasn't as bad as I'd feared.

The annoying thing is, I've no idea how any of the cakes tasted.  I still think whole cakes should always be presented with one slice missing, so everyone can see the cook has tested it.  Quality control is so important.

Anyway, someone remind me please not to use any untested recipes, if I do this again. 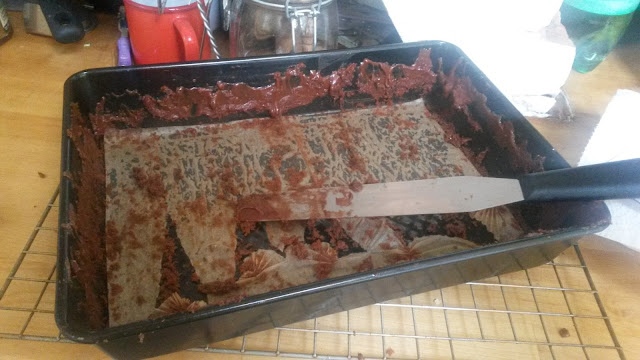 Wow, it looks so delicious and tasty, I want to have it… You surely know how to bake and I am sad that I don't know it. Thank you for sharing it with us