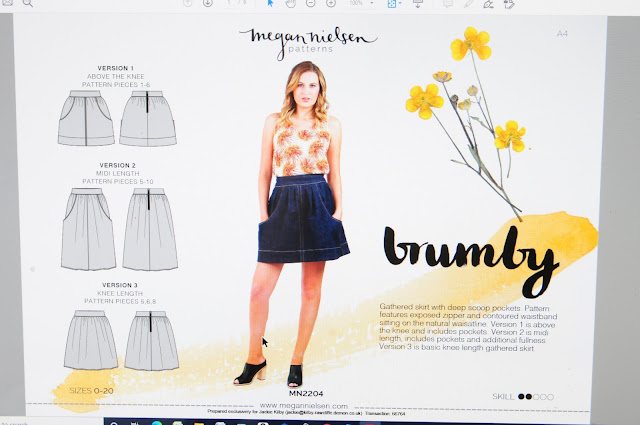 Yesterday, I tried the Brumby skirt by Megan Nielson Patterns.  I liked the look of version 2 - the mid-length skirt (see the photos on their website).  However, not only were my sewing skills not quite up to the job, but when I'd finished it, I decided that flared skirts don't really suit me(!)  On their model - and in fact, on many of the other people i've seen it on - it looks really light, summery and... lacking in fuss.  On me, it sort of swamps - and fusses - I don't know what the problem is exactly; this shape just doesn't work very well for me. 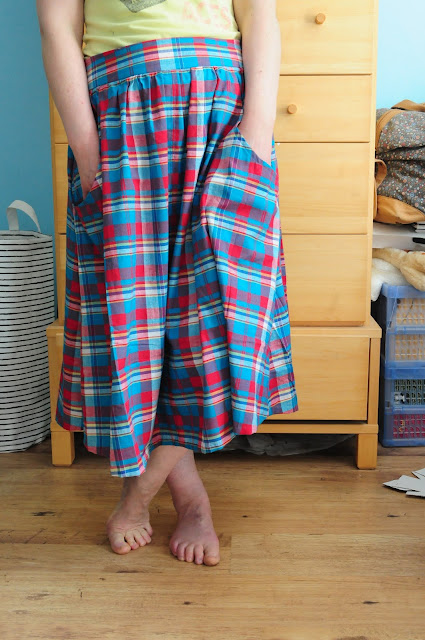 My first problem was just in printing the pattern out!  That little box which you're supposed to check is exactly two inches square(?) - it wasn't; mine was like 0.1 inches smaller.  I thought this wouldn't matter too much, but when I started sewing the waistband, it became clear that it would.  I added a strip of another couple of inches and the result is a sort of relaxed fit.  I think it probably hangs lower on me than it should - and annoyingly, that makes the pockets a bit too low.

I think you're supposed to be able to 'recalibrate' your printer to correct this problem, but I've no idea how to do that.  This would really put me off purchasing PDF patterns if it happened again.

Re the construction, the thing I had most trouble with was the zipper insertion.  It's an exposed zipper.  The instructions do say you can sew a different type, but by the time I'd realised I couldn't get the exposed zipper to work, it was too late; I'd already cut the fabric in a way that made it unalterable.

The instructions have you cutting and ironing back the fabric to create a zipper-sized gap in the skirt, then sewing the base of the inverted zipper to the right side of the skirt.  You then flip the zipper up so it's inside the skirt, and sew it to the ironed-back seam allowance.  I tried this manouvre multiple times and failed miserably.

I had three problems.  First, when sewing the base of the zipper from the outside, the relevant point on the zipper has to be matched with a short line of basting underneath it (i.e. you can't see both at once) - which I struggled with.  Second, the line of stitches made needs to be exactly the width of the gap left for the zipper (it's about 1cm) - any longer and it's difficult to flip and tuck inside.  Third, when sewing down the length of the zipper tape, it again requires that the stitching on the zipper tape is matched to a line of basting directly beneath it - so you can't see both at once.  I finally tried pinning and sewing from the basting side, but the zipper shifted around and I was unable to control it properly because I couldn't see it.

At this point, I was ready to throw it on the floor and go and have a cry outside (I like to recreate the Great British Sewing Bee as closely as possible), so I passed it over to my mother - who knows a lot more about this kind of thing that I do.  She said to just place the zipper straight on the inside and sew it into place.  So I got the blasted zipper in eventually, although by this point, after all my failed attempts, it was looking rather tatty!

Looking at other reviews, no one else seems to have had trouble with the zipper - clearly I did something wrong.

I didn't have a good time with the shaped waistband either.  It's made with a facing, and when I tried to fold the facing to the inside and slip-stich it down, there seemed to be too much fabric at the points - the shaped bits - so I had to pleat them to get them to sit flat.  I could also feel the gathering through the waistband, which makes it seem quite lumpy - although I'm not sure exactly how you get round that.  Thicker interfacing maybe? 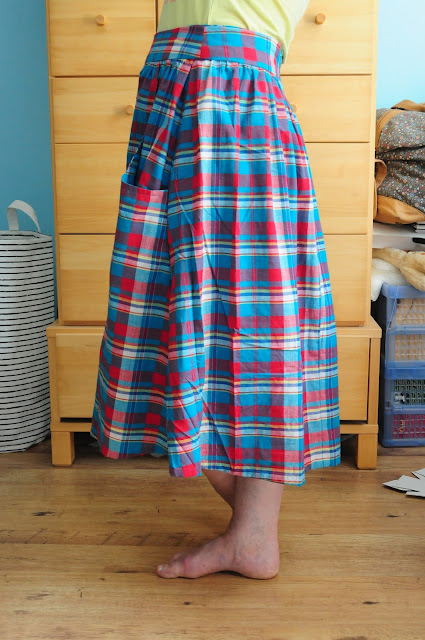 One good thing: I had a little navy linen left over from making these trousers, so I used it to make another Vogue peplum top, this time with sleeves.  It worked really well - I love this pattern! - and this time I managed to get the zipper sewn on straight, with a hook and eye fastening at the top.  I've just realised, the top edge still looks a bit uneven in the second photo below, but that's just the angle - it is actually straight (honest)! 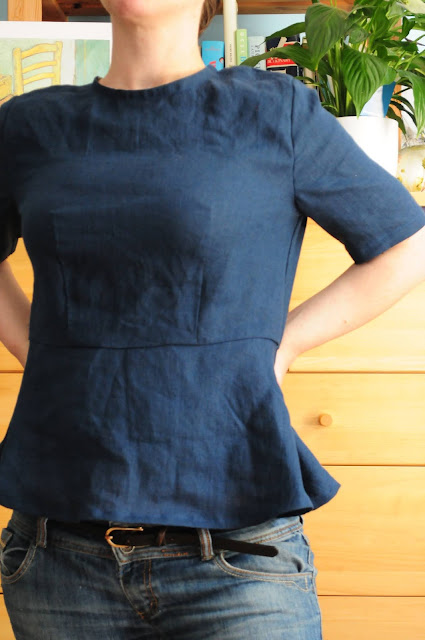 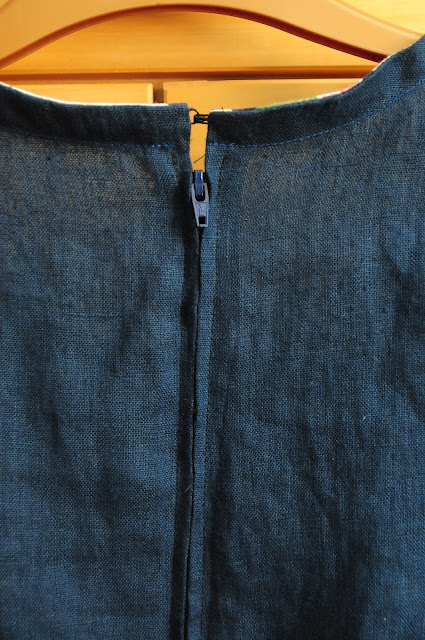