I took some more pictures of my unit at the art & craft centre recently. I have rearranged things again, but I really must find a more convincing way of changing the display.

Anyway, I have been trying to follow the advice of the internet experts: 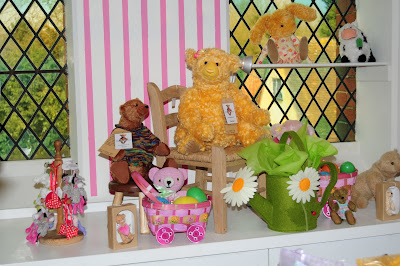 Here are the bears arranged in a triangular shape, with the tallest in the centre. I do like the look, but the pillar in the centre of this picture (with the pink stripes) has no shelves or anything on it, so above the yellow bear's head, there is a lot of empty space, and it looks quite blank. Really, I could do with either putting up a free-standing shelving unit against the pillar (although it would be a shame to cover the stripes), or having a taller stand for the yellow bear. 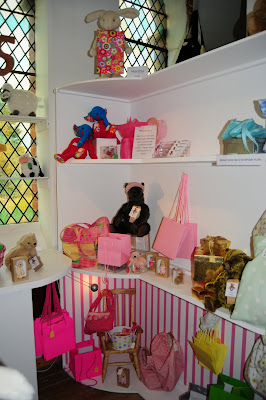 Difficult to see, but this is my attempt at arranging things vertically by colour - pink! It really needs more light, particularly to the top two shelves. I've always had difficulty with lighting. There's a three-way spotlight in the centre of the unit, a single table lamp on the surface at the back, and - as you may be able to see - a light on the very bottom shelf. It still doesn't cover all the display space though.

Another problem is that there are gift bags on the bottom shelf. I guess I was considering that as wasted space - I doubt adult customers take much notice of it. However, it is the perfect place to puts kids' stuff, so I really ought to be putting bought-in, manufactured, child-safe stuff there.

In fact, that's true of all the lower shelves. However, not only do I have the space in the picture above - which runs the entire depth of the unit, but also the space on the lower shelves at the other side (see pic below), and the shelves of the central, island unit (see fourth pic). Altogether, those areas constitute about one third of the total display space, and the amount of 'toys' I sell constitute a much smaller proportion of my total stock than one third.

I guess I don't have to put children's items on the lower shelves. However, not only does doing so put the right stock at the eye level of the right customer, but it also means that the hand-made stuff - which is probably less hardy and more expensive - is put higher, out of reach of children, and so is less likely to be pulled about and handled.

Maybe I should be thinking about buying in more manufactured toys. 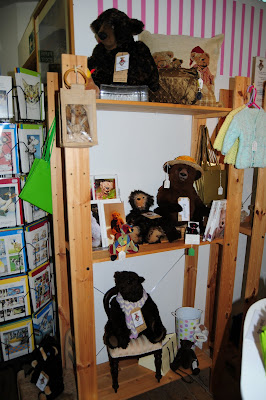 This was meant to be another attempt at displaying vertically by colour. Unfortunately, I'm not sure it really works to put lots of dark brown items together - it just looks dark.

Also, I have just realised, the shelving in the photo above is the first thing you see of my unit, as you walk from the stairs that come up from the ground floor, towards the front of the building. So the first thing my customers see is quite a dark, dingy, shelving unit. It would be better to have brighter colours there.

Another thing I would like to do is to put a big sign on the end of that shelving unit, with the lettering big enough that you can see it from the stairs (the stairs are right at the back of the building; my unit is right at the front) - just something really simple, to draw people towards the unit.

The sign would mean that you could see less of the stuff on the shelves. I think the trade-off would probably be worth it though.

This is the central island unit, which is right at the front, and which tends to be the first thing that people look at when they come buy the unit - hence the most popular seller (chiffon bags) being displayed there.

As I said, I think I ought to remove the gift bags from the lower shelves - I'm not sure they're going to be the most attractive thing to passing toddlers.

Another thing you'll read if you scour the Internet for advice on creating great retail displays, is that you should try to make full use of any unusual opportunities that your particular space has to offer. Before I moved into my current unit, I used to be on the second floor of the art & craft centre - in a little unit under the eaves. It was really sweet and cosy - like a little room in itslef, with a glass frontage looking onto the main walkway, and a balcony which looked over the first floor.

Fewer people go up to the second floor however, and also - much as I loved it - I really struggled to make the eaves work for me. The lady in the unit nextdoor (who also had eaves to contend with) had blocked them off. Her unit looked much smaller as a result, but she hadn't lost any usuable space by it, and in fact had gained some by putting an extra wall in. I was reluctant to do that - a) because I didn't want the unit to look smaller, and b) because I thought the eaves gave the unit a lot of character. I failed dismally in displaying stuff there though.

Anyway, in my current unit, I have three cupboards under the surface at the back. 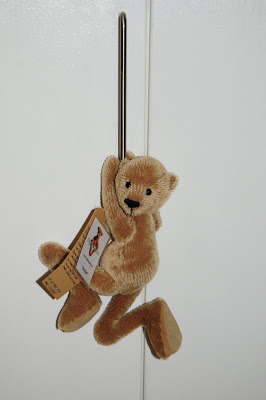 So I have a bear hanging from the cupboard handle (not sure that was worth waiting for). Really though, as with the gift bags, its the wrong height to display something which is not suitable for children. 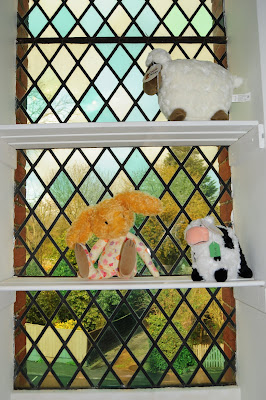 Finally, the picture above is of the window display. I have two lovely tall church windows in my unit - although only one has shelving in front of it. Sadly, I can hardly say I've made the best possible use of the space. It looks like a collection of items which I couldn't find room for elsewhere. And two of the items (the sheep and the cow) are bought-in toys. They are completely out of reach of any child - and probably a lot of adults as well, so they really ought to be on the lower shelves.

I think one of the things the window is lacking is something to frame it. It could do with a plant growing up one side of it (preferably a hand-made plant, with big, colourful felt flowers) - and obviously, some better attempt at arrangement. It would be a good place to put items which are slightly more fragile, which I'm not keen on people playing around with (e.g. self-standing bears, antique bears).

Anyway, here I come to the end of a crushing critique of my own display attempts (yeah, thanks for that); the next time I show photos of the unit, there will be big improvements!
Posted by Ruth at 07:59