I have a new bear!

He's called Rowan, and he's a dear little thing. He's one of those which didn't go how I planned, but actually turned out much better than I expected. He was supposed to be a 'recumbent bear' - a pattern which allows him to both lie down and sit up - looking comfortable in both positions. I shortened the pattern for one of the recumbent bears I had made in the past, and redesigned the arms and legs to look altogether more petite and stumpy.

The miscalculation came in the angle of the neck. Somehow the shortening of the body means that the original neck angle doesn't allow him to lie down properly. He does 'slump' quite nicely though - in true, battered old bear-fashion - although he is considerably smarter than a battered old bear.

I am so taken with the way he has turned out though, that I'm considering making a limited edition out of him. Something has got to be done about that neck though, first. 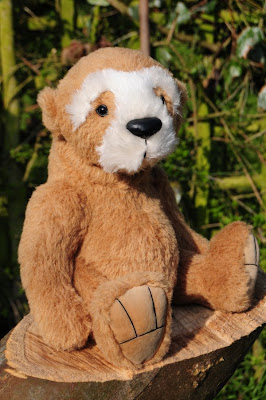 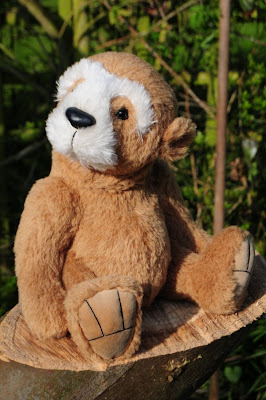 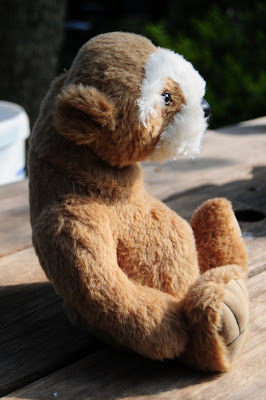 I have also made progress (albeit very slight progress) with the signeage I was talking about in an earlier post. I have made a sandwich board. The two pieces are covered in black cotton - printed with flowers and lanterns - and joined together with strips of ribbon at the top and the sides. It's not very stable though, and I was wondering whether I would have done better to sew right along the top edge. 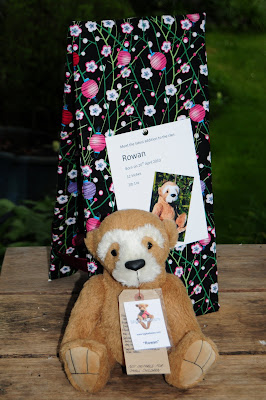 I sat down to make the signs and I suddenly realised that I hadn't a clue what to use them for - what the signs were actually going to say(!) So ideas for that were the first thing on the agenda. As you may be able to see in the photo above, I have used the first one to advertise Rowan. The sign says, "Meet the latest member of the clan... Rowan. Born on 20th April 2010; 12 inches; 2 lb 1oz". My attempts to advertise my bears are giving me a very twee turn of thought! I know many bear collectors have a lot of sentimental investment in their bears though: requests for birth certificates and 'certificates of adoption' seem to be quite common, so my sign was supposed to reflect that.

I thought I might use another sandwich board to advertise my posh gift tags (see previous post) - since they are currently on display with the manufactured bag hangers that I sell, and don't seem to be receiving much attention.

It would also be an idea also to have a sign for the manufactured toys that are on display - pointing out that they are suitable for children - since I do have a sign saying that the hand-made bears are not suitable. I thought it would be nice to have a sandwich board standing on the floor, next to the toy shelf, but if they're not very sturdy I may have to revise that plan.

Also, I rent shelf space to another bear-maker, and will shortly be displaying the work of another lady, so signs for those would also be a good idea.
Posted by Ruth at 20:51