Well, I think I have succeeded in making two of the most unflattering skirts ever.

I found a pattern in the latest Sew Stylish magazine for a simple A-line skirt. I've always liked A-line skirts - I was under the impression (false, as it turns out) that they suited me. My first attempt was in plain pink cotton (on the basis that I didn't want to use nice fabric on my first attempt - it was bound to go wrong).

Sure enough, despite my having measured everything carefully, the waist turned out to be 2 inches bigger than it should have been. My mother reckons this is because I stretched the fabric as I was sewing the waistband. Anyway, the way the waistband was sewn, I figured I could thread a piece of elastic through it to tighten it up. That sort of worked, but now its a little too close-fitting, and the side zipper keeps falling down.

The end result of all that is that it looks like you're wearing a pillow case that's open at both ends. Not a good look. 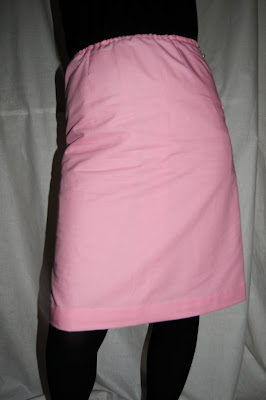 I think the pillow-case look was at least partly a result of the type of fabric I used though. Since I didn't have any more of it (a good thing perhaps), I tried again with something else - a thicker, tougher, camoflage print fabric.

I was worried about it being too big at the waist again, so I took 2 inches off the pattern. However, the new fabric clearly wasn't as stretchy as the pink stuff I used first time round, and it turned out to be a bit of a sausage-skin job. So (getting rather frustrated at this point), I unpicked one of the side seams, and added an extra strip of fabric, which actually worked quite well.

I also tried to jazz up the design slightly by adding a flounce to the hem. This was shown in the magazine, but no pattern or instructions were given (but hey, how hard can it be!). I didn't have a lot of fabric left by that point, so the flounce wasn't very flouncy, and where I hemmed it, the fabric got quite stiff, so the flounce kind of sticks out in points... 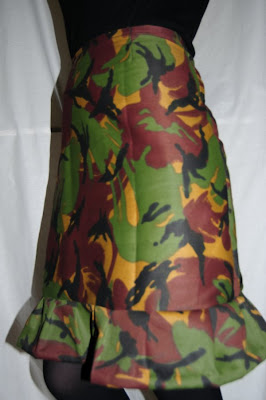 Despite this, in the immediate aftermath of having made them, I was actually quite chuffed. It is nice to be able to complete something new, even if it is rubbish. And, having had a go at it, the idea of learning dress-making is becoming [slightly] less intimidating.

In addition to making unflattering skirts, I have been working on the new website design. This morning, I linked it to the old website (which is currently still up), and uploaded the new pages. If anyone wants to preview it (pretty please!), you can go to the old website, here, and, directly beneath the text on the right-hand side, there is a tiny little line. The line is hyperlinked, and it should take you to the new website.

It is quite a sombre look: I was beginning to dislike the dull colours of the old website, so I went for plain black and white, with a big black banner at the top of the page (think: 'stylish in monochrome' rather than 'oooh somebody died'). I'm beginning to wish I'd put something a little more colourful on it now - but there's no going back now (not the way I do it).

Anyway, if you find any typos, broken links or whatever, please let me know.

And do use my image map while you're there!
Posted by Ruth at 20:53