I finally finished my polar bear. Here he is... 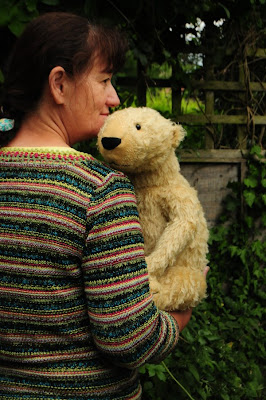 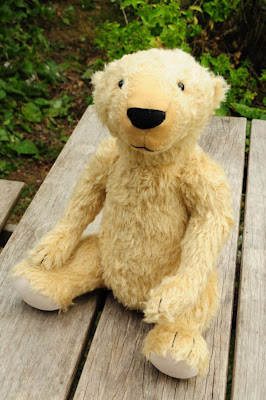 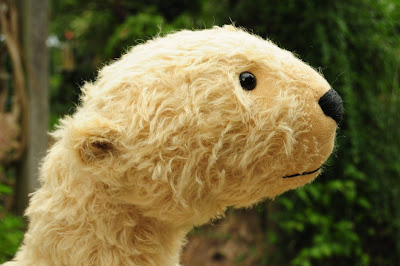 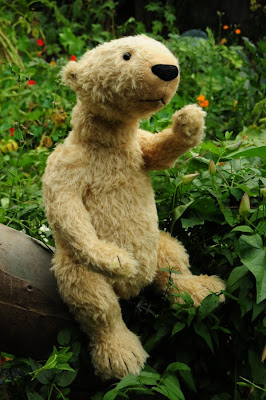 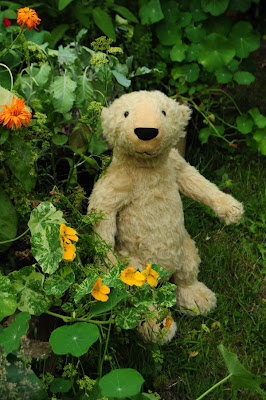 I'm not completely happy with him. His neck is too thin and his arms are too puny. It was difficult to judge the proportions with this pattern. The face pieces were quite small, but it had a very wide head gusset, so the head turned out bigger than expected.

He was supposed to have a large head for his body, but then what do you do with the neck? Either he has a neck which is tapered - starting wide at the top at the top and narrowing towards the body - or he has a neck to match his head, which is too big for his body, or a neck to match his body, which is too small for his head. The first option would look really strange, I thought, so I opted for the third. As I said, I'm not sure it really works, but then what's the alternative?

I considered giving him a sort of collar, made in the same mohair, with a sort of draped look about it - like a cowl-neck jumper - but in the end I didn't have enough mohair.

I am very happy with his face though. He is based on a photograph of a c.1910 Steiff polar bear. I would like to revist the design with a few changes - more butch arms, and perhaps omitting the neck altogether(?) The really frustrating thing is that the original Steiff polar bear had a ball and socket joint. I've never seen anything like this on the market, or any instructions on how to create one. Generally I'm rubbish at the technical stuff, but I shall keep on trying to figure out how it was made.

Anyway, my pile of new stock is starting to look really substantial. If I can forget how long it took me to make it all, I actually get quite proud!

When I first started out designing my own bears, I made a bear who I called 'Fag Ash Lil' who fitted this description. I still like the idea, although back then the execution wasn't great. She was made out of an unusual sparse, string mohair - orange with yellow pile. She had a really unusual shaped face, a little yellow tabard and a head scarf. And there was a cigarette hanging out of her mouth. I think what ruined it was the mascara. I wanted her to look like a sort of smoky, slightly coarse, over made-up, old boiler - a la Bet Lynch from Coronation Street. So I drew on big thick black eyelashes.

I want to try her again - but with better eyelashes. I'm thinking of trying false eyelashes, which apparently lots of bear-makers use now. (That is to say, they use them on their bears.)

It may take me a little while longer this time though - I am currently working atop a large heap of mohair scraps, pattern pieces, and bear-making tools. I really need to tidy up! Also, the lingerie has been selling well recently, but I haven't been uploading new pieces as fast as I should. The next post may be about lingerie then - but as always, I will be back to post the results of the bear-making.

You might be right about the neck, but don't change the head. That has a really nice shape.