This is an update on this bear - my special-antique-mohair teddy bear, who turned out very badly. I was wondering what to do with him, and searching through stuff to see if I could find any 'prop' that might gee him up a little, so to speak. I'm terrible with the finishing touches, although I'm always impressed at the use that I see other people put them to.

There was a lady on US Ebay who used to create the most spectacular listings. The bears were good, but the props were truely gobsmacking. She would create a little story, narrated by the teddy bear, showing you all his possessions - many of which were either hand-made or antique.

Anyway, I'm a long way from that level of prop-competence, but I did find a little pair of spectacles that I think I bought from the teddy bear shop in Colchester (now sadly no more). They are too big for my little bear, but he does look rather charming all the same. They were difficult to photograph, because the lenses reflected the camera flash, but here's what he looks like... 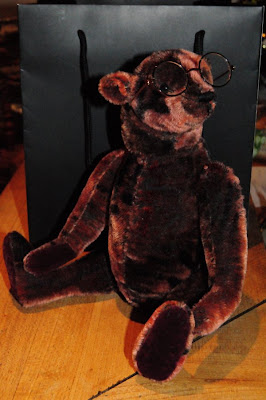 Then I found a stash of black gift bags, which fit him absolutely perfectly - he looks so very sweet peering out the top, with those spectacles on his nose! 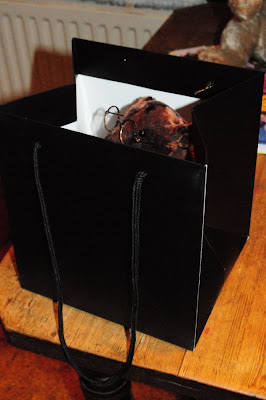 Anyway, I have marked his price down and I took him to the Art & Craft Centre today. I wanted to call him "Trotsky", given that he is slightly red in colour, but my mother vetoed that as being too violent. "Kafka" was similarly pooh-poohed, so eventually we settled on "Chekhov" - a nice gentle, bookish name! So, we will see whether anyone likes him.