I got home from work yesterday to find a parcel waiting for me... 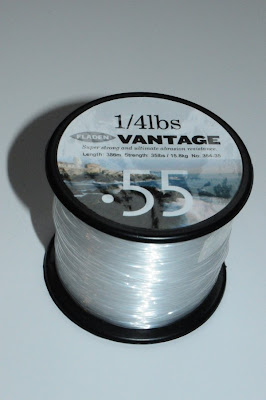 My fishing line! Finally, I get to finish my pouffe!

Unfortunately, after the initial excitement it was downhill from there, and for a while it looked like the whole thing was going down the toilet. I had decided that I would be clever and eco-friendly, and stuff the pouffe with all the tiny mohair scraps left over from bear-making. I also decided to ignore the recommendation to use just 3lbs of stuffing. 3lbs? How wimpish is that - I can get 7.5lbs of mohair scraps into my pouffe!

So I pushed it all in and sewed up the opening. The next step was to pull in the centre with a button. The instructions recommended using a washer, beneath the button. I didn't have any large enough to cover the hole in the centre (see here for an explanation of that problem!), so I used the hardboard disks that teddy bear joints are made from. I had this whacking great tapestry needle, which I've never been able to find a use for, which seemed perfect for the job.

Try as I might though, I could not get the needle to go through the pouffe. After much pushing and hammering and bending of precious needles, I tried to sort of forge a path with a very large knitting needle. That worked, and I finally ended up sellotaping the tapestry needle to the knitting needle, in order to feed it through. I think it was around this point that little red polka dots began to appear on the pouffe, and I realised that I'd stabbed myself in the fingers and was bleeding everywhere.

I wrapped up the bleeding fingers, hauled on the thread until it was taut, then wound it round another hardboard disk, and repeated the procedure of threading it back through the cushion. More polka dots. Much cursing. When I pulled the needle out the other side of the cushion and heaved on it to pull it taut again, one of the hardboard disks disappeared inside the pouffe. The polite analogy is some sort of giant sea urchin devouring all before it.

So, I tried it all again, using a larger disk, and finally managed to create some semblance of a dimple. There was no way however, that I was going to be able to feed both needles through the cushion with a large button attached to one end, so I tied off the fishing line, and here I hovered - humming and haaing over what to do next.

The light had dawned by then, over my ill-advised modifications. For anyone else trying this pattern, be warned: don't use anything but the lightest, fluffiest teddy bear stuffing - and certainly no more than 3lbs of it.

Sitting there in disarray - surrounded with mohair scraps, hammers, knitting needles and discarded fishing line, and hampered by the tissue wrapped around my punctured fingers - it was suggested to me that I could just superglue the button onto the hardboard disk. Unfortunately, with all the fishing line tied round the disk, I don't think that would have worked.

So, I cut out the hardboard disks, opened up the pouffe, removed the mohair scraps, and re-filled it with the recommended 3lbs of stuffing.

I decided to forgo the faff with the hardboard disks this time - since I had such big, butch buttons - and actually, it worked really well. The needle went through easily. I struggled a bit to tie the fishing line (must work on my knotting technique), but I think I got there in the end.

And it looks really grand - even in my rubbish photos - take a look! 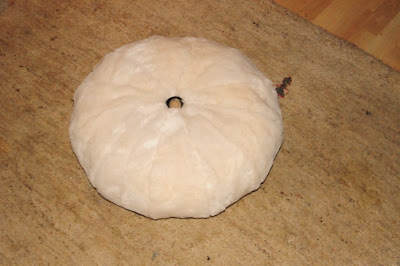 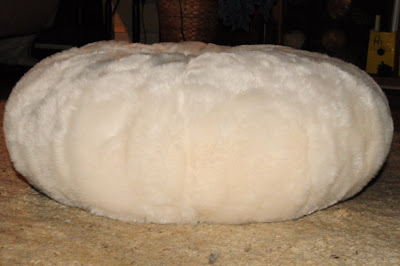 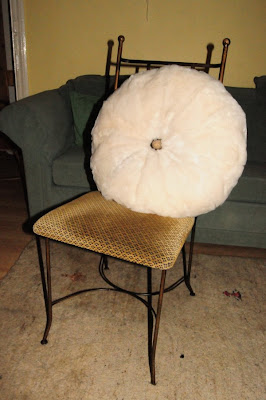 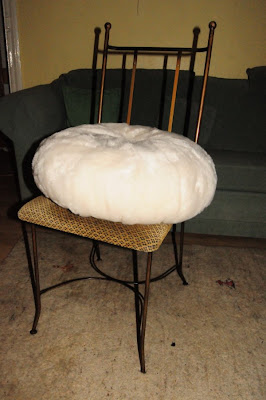 I wouldn't like to try sitting on it - just in case it went bang, or worse, deflated with a loud raspberry. I have found that, when you try to use it as a cushion behind your back, it tends to take up most of the sofa seat. And it's a bit short to use as a foot rest.

What are you meant to use pouffes for?

Anyway, it might be completely useless, but it is utterly gorgeous - a large, heavy, slightly saggy lump of incredibly soft fluff - everyone should have one!

In the meantime, I have finished bear no.2. I was having a conversation recently with someone, telling them about my shockingly low output of bears in 2010. They made the rather depressing point that actually - that wasn't lazy - that was just restricting the number of bears to fulfil the existing demand. Clearly, bears with large feet need to get out a bit more, so I am going to give Etsy another go. I love shopping on Etsy, but I have never actually managed to sell anything there myself. It's worth another go.
Posted by Ruth at 13:02