It's my birthday today! I had a very nice, albeit very quiet, day at work, and then I came home to find lots of parcels waiting for me. Not all birthday presents, but it kind of added to general, present-opening, me-me-me atmosphere. I had a beautiful 1940s dress and two 1960s train cases that I bought on Ebay. Then some books - a history of Newgate Prison and a biography of Adam Worth, the bloke who Conan Doyle's Moriarty was apparently based on - and DVDs - The Big Sleep and Breakfast at Tiffany's. And a wonderful little bear-sized wheelchair from my Aunt in America - an exact replica, with working wheels, working brakes and little flap-down foot pedals. And crutches and a plaster cast!

I am still a little tentative about the idea, but I am planning a wheelchair-bound bear - the point being, I guess, that it represents what some people live with all the time. I was rather dubious about it, thinking that it might be slightly upsetting, but having seen the wheelchair, I think it may be okay.

Anyway, whilst I was at work, I took some photos of the unit. It is looking rather dull and uninspired at the moment, sadly - the bears I sold over Christmas are much missed. Taking photos does help me work out what's going wrong. 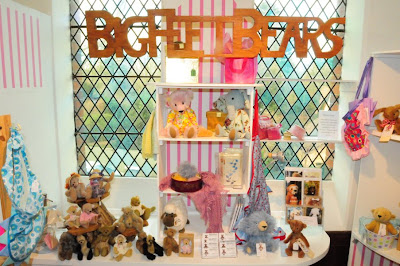 This actually looks quite colourful, but it is perhaps a little misleading - centring everything under that wonderful sign. The little bears on the left of the photo are made by Valerie Noy, the lady who sub-lets space in my unit. They could perhaps do with being a bit higher - in fact, the displays on both sides of the central cabinet could probably be a bit higher. 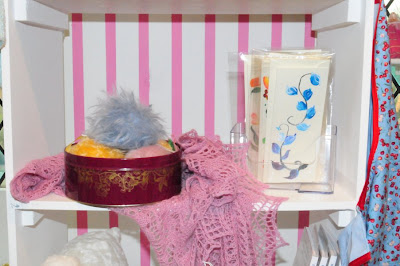 These are the 'Christmas' baubles I made (now just to be known as 'baubles'), a lovely shawl knitted by my Aunt, and my mother's acrylic cards. I guess, as a display, it's colourful enough - just a bit boring. The shawl needs to be displayed spread out really. I'm just scared that if I hang it up - from hooks - and someone pulls on it, it may get damaged. The baubles could do with being hung up too, and the cards are not very visible stacked up in a stand like that. 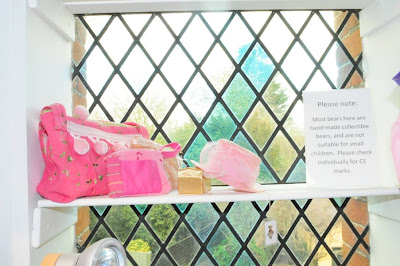 Bags and a hat made by my mother. Only one of the two windows has shelves, and one shelf is higher than anyone can reach. This lower shelf actually looks better in the photo than it does in reality. When you stand in the unit and look at it, it sort of gets lost among everything else. I should do more with the windows; they are really quite striking. Framing them in something would be nice; perhaps putting something really tall on the top shelf; coordinating the colours of the two shelves. It would also be nice to have something facing outwards (since I'm one of the few unit holders with shop windows) - perhaps some silhouette-like thing, since it still gets dark early. 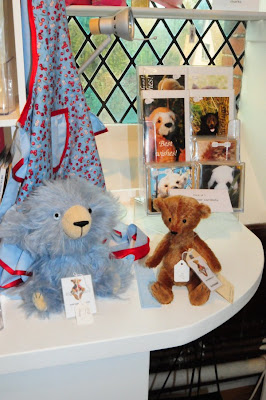 Henri and Archimedes, an apron and some teddy bear cards. I thought it was a good idea to place a blue Henri against a blue apron, but actually, he just sort of disappears. 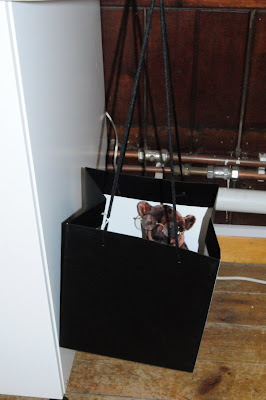 Again, it seemed like a good idea at that time. That's Chekov - in a bag, hanging from a hook which I usually hang gift bags from. It looks quite sad actually, particularly against those incredibly ugly bare pipes. I am not sure what to do with Chekov. He is not a particular favourite, and although I think he looks good in the bag, he actually just looks like I'm trying to hide him when I display him that way in the unit! I think either I need to find a better way of displaying him, or he should be withdrawn. 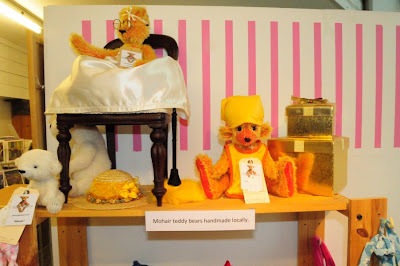 Um... from the left, Keiran, Victor, Geraldine and Lily. This, I think, works reasonably well. It's a nice display of yellow (and a rather yellow photo as well, unfortunately), and it puts Geraldine on a high shelf, away from small children trying to look under her wedding dress! 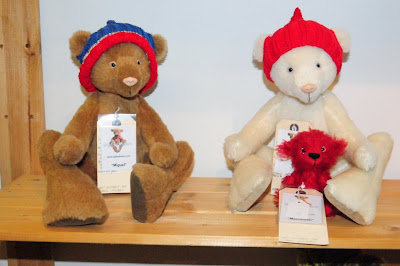 Miguel and Wanda, with little Macintosh. I thought this worked well - the very spareness of it drew the eye. I wasn't so keen when I was looking at it today though. I am beginning to think that maybe the best way to sell is to stuff your shop to the rafters. 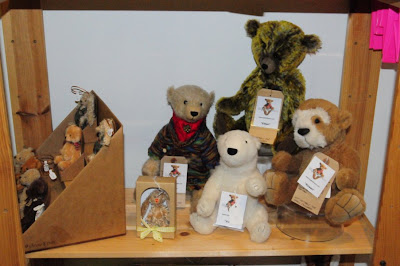 Manufactured mini bears, manufactured rabbit, Otto, Drake, Ethan and Rowan. This doesn't work. I do like the stand of manufactured bears on the left - facing towards the stairs that come up from the ground floor. This shelf is quite dark though, and both Otto and Ethan are quite dark in colour, and sort of fade into the background. Maybe, darker-coloured bears should sit on the white shelves on the other side of the unit. On the lower shelves on the left-hand side, it ought to be primarily white bears. Or maybe I could just improve the lighting. 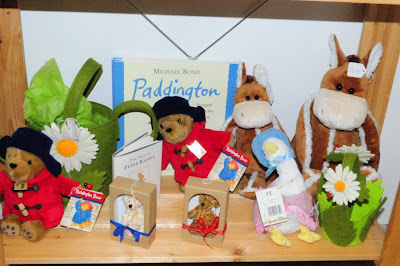 This is one part of my bears-safe-for-children section. It looks alright, if a tadge messy and disordered. Thinking about the colour thing though, maybe these things would be better on the white shelves on the other side of the unit. 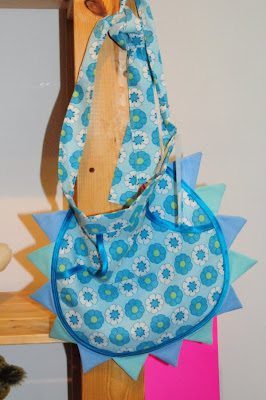 An apron(?) I had real trouble displaying these - they're difficult to hang. I must see if I can find some of those trouser-hangers with the clips. The knotted ties are not particularly attractive. 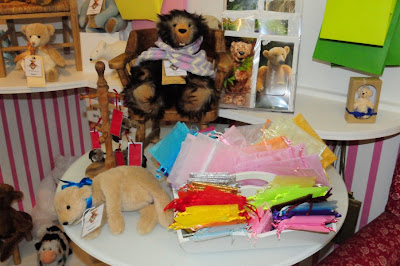 Albert, Dave (disappearing above the picture), Pascal, Izzy and a little manufactured white bear. This is on the other side of the unit - against the white shelves. The table looks too messy. Again, I thought the white tray holding the organza bags worked quite well, but it actually looks a bit scruffy. Pascal needs to be higher up, so you can look into his eyes; Izzy could do with a plainer background; and the little manufactured bear looks a bit lonely out there on his own (not to mention white on white). 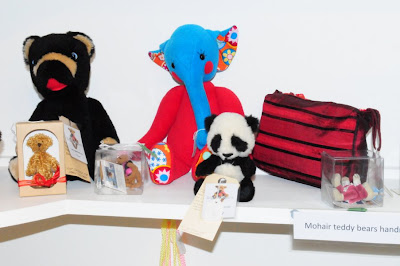 Manufactured bear, Choo, Deb Canham bear, unjointed fleece elephant, Hugo, and another Deb Canham bear. Well - they are colourful bears against a white background. I don't think the bag fits very well there however, and I have lost the triangular effect - what with Choo and the elephant being the same size. 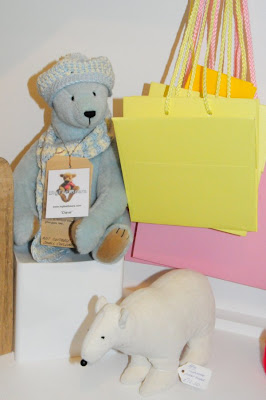 Dave and a 'block' polar bear. This isn't bad: the colour-combinations are nice - it's just that the little polar bear disappears against the white shelf. He needs to go over onto the wood-coloured shelves on the other side. 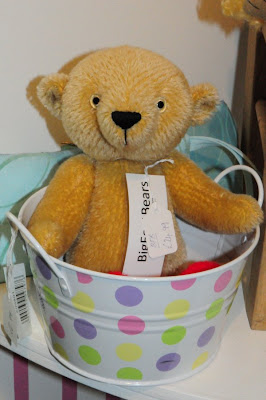 One of my welly-boot bears - and this I think, works well too. 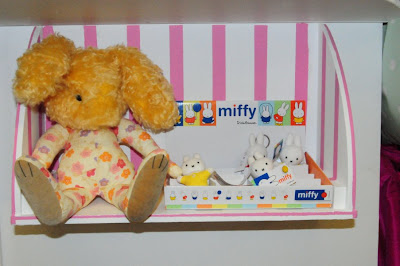 Unjointed rabbit and manufactured Miffy keyrings. I'm not so sure about this one, but I don't know how to improve on it. Part of the problem is that that little shelf is all on its own, with nothing but white wall below it. I guess what would be really nice is to have something hanging from the shelf. 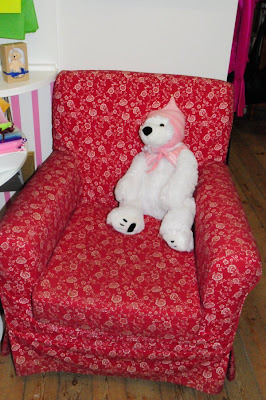 And finally, my very popular IKEA armchair, with a manufactured polar bear (with hand-knitted hat and bolero) dozing on it. I need to wash the covers. And I need to do something to make more use of the space without depriving my customers of a place to nap when they feel so inclined.

Anyway, there ends my whistestop tour of the teddy bear unit. Hopefully, I can get things sorted in time for Valentine's Day. In the meantime, I am looking set to miss my two-bears-a-week target yet again! Back to the bear-making!
Posted by Ruth at 22:15