I was working at the Art & Craft Centre today: it was terribly quiet - we're into the pre-Christmas lull.  At least I hope it's just a lull.  Anyway, all that peace and quiet gave me time to contemplate the unit, and didn't take long before I started to feel very dissatisfied with my efforts to decorate and stock it.
It's certainly true that I have done very little stocking or decorating of late.  I've been... well, I'm not sure what I've been doing.  Completing commissions, indulging a new-found interest in cooking, reading a bit, preparing for the various renovating/decorating jobs our household seems to have embarked on recently... in other words, I've done a whole lot of dithering and not much else.  My problem is that I've never been able to multi-task.  To any extent.  If I get into cooking, I don't concentrate on work.  If I throw myself into a book, everything else is secondary.  If I'm making a bear, the rubbish/laundry piles up and we eat badly (and late at night) until something gives.
Anyway, the unit.  I guess, looking at it, it just seemed to be full of a) hand-made bears which I've had for a long time, and b) manufactured toys for kids.  In the first case, I'm thinking of having a clear-out and dismantling those bears which haven't sold (sob!).  Here are three of those which face the chop: 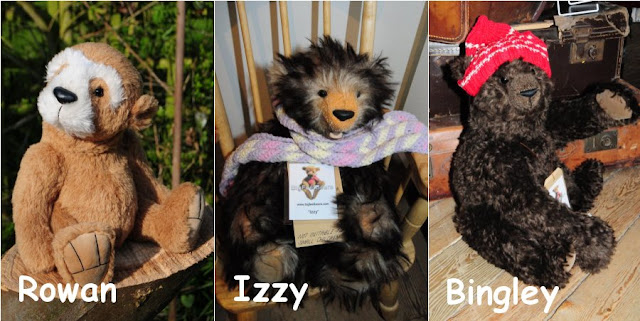 Obviously, I think they're really lovely, charismatic bears.  In different ways though, all three of these were slightly experimental, and didn't quite work out as planned, so maybe that had more of an impact than I expected.

In the second case, well... the manufactured stuff was only ever meant to be a tiny part of the unit - something to offer kids, when I have a whole unit of not-suitable-for-children-bears (it just slips off the tongue, that phrasing).  I need to redress the balance - preferably with the introduction of many more hand-made items - some bears, some mammoths, some other lower priced stuff...

Which leads me onto the third problem with the unit at the moment - that it shows no signs of Christmas being imminent (is it imminent, in the middle of November?).  Anyway, from a retail perspective, it's imminent!  Somehow, the urgency always passes me by until, say, 20th December, by which time it seems too late to bother.  I've never been on time for Christmas yet.  I believe I do have a few cards stored away somewhere though, and a little bear (hand-made) in the sweetest little santa suit and false beard (not hand-made).  Some other stuff would be nice too - maybe some tree decorations?  A few of the kind of ready-to-hand-over gifts that come ready-wrapped with a Christmas card tied to the outside of the package?  Something a little reindeer-ish, perhaps?  My wreath idea, which I had last year but never got around to?

Plenty to be getting on with anyway.  Speaking of which, I had some nice news yesterdays.  Loulou - one of the bears I made for the Thirteen Brushes Art Gallery - has found a home!  They have asked for a few more bears within the same price range, so that's first on the list!
Posted by Ruth at 20:17

What a shame to dismantle the bears. Rowan especially is lovely. I don't know why he hasn't sold. Why don't you try putting them onto Etsy at a sale price.

Hi Polly. It is a shame, but you can't have these things sitting around in a shop forever. I could try them on Etsy, but I've never had much luck with that in the past.