The electricians have been here the past two days to set up the wiring for the kitchen.  Wierdly for the writer of a blog that so few people read, I feel compelled to show detailed photos of their work - given that they probably had the hardest job of all.  We have an old, Edwardian house, and the wiring is a complete mess.  A couple of weeks ago, the electricity went off in one of the back bedrooms.  Then it went off in the kitchen.  After some fiddling by the builders, it came on in the kitchen and the back bedroom, but went off in the other two bedrooms.  Nobody seemed to quite know what was going on, so eventually the builders took down the ceiling in the hallway to try to get a better look at the wiring.

This was the situation when the electricians turned up yesterday.  They ran up and down stairs for a bit, and moved lots of furniture, and eventually discovered a blown socket in one of the bedrooms.  I'm not sure how this affected the rest of the house, but anyway, they replaced the socket and everything works now.

Sooo, this is the wiring for the cooker... 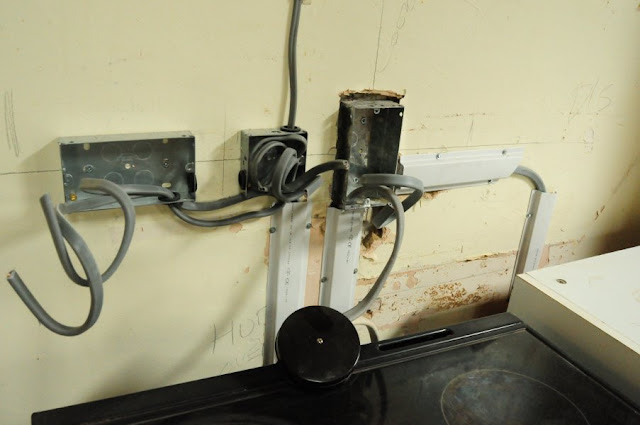 This is part of the new larder wiring.  That wall was covered in clothing because we have always been short of wardrobe space.  I was surprised, when the clothing was taken away, to find that the wall was lilac.  I don't think I've ever seen it before.  Personally I'd be inclined to cover it up again as quickly as possible. 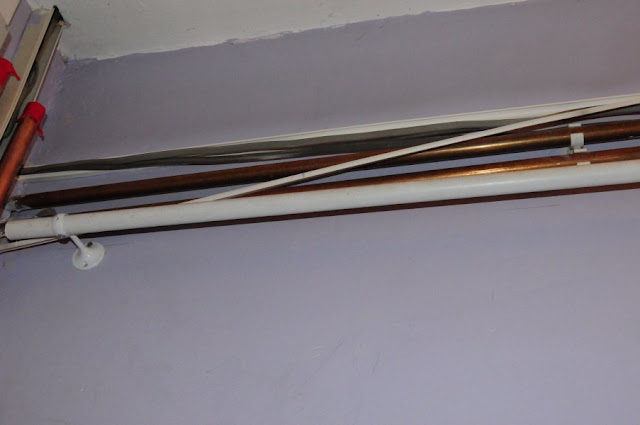 Wiring for the pendant light in the extension - over the spot where we hope to have a dining table. 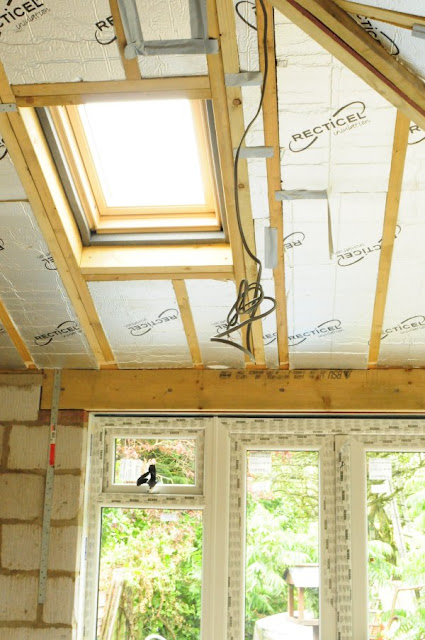 Wiring running up the framework to the porch. 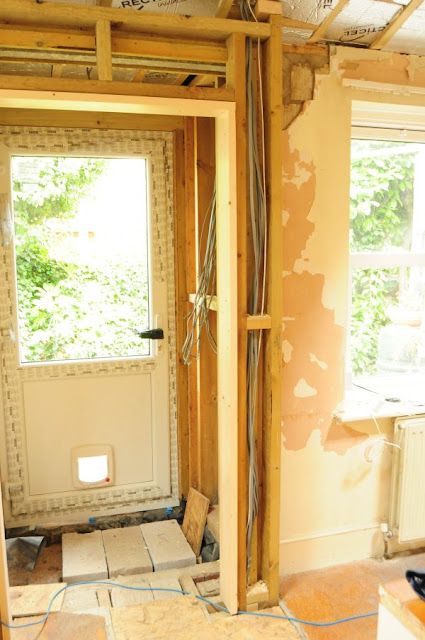 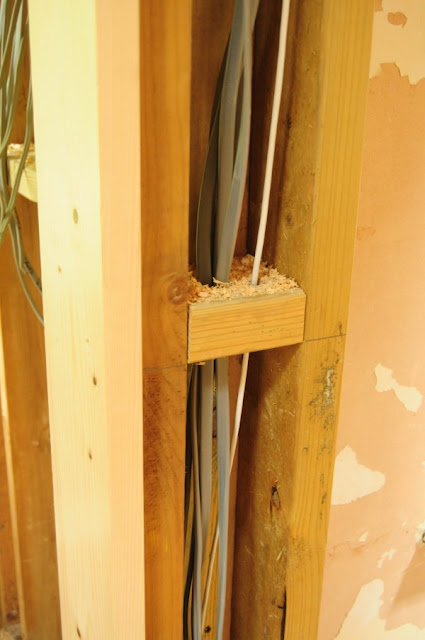 Lots of wires in the porch... 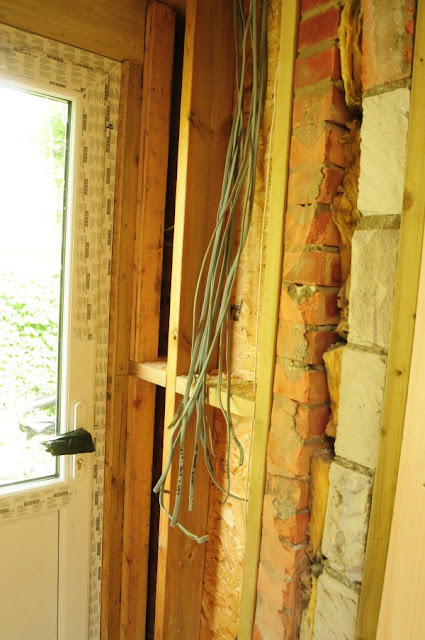 I think there are so many wires because - reading them - it appears that a lot of the kitchen lighting is going to be two-way, so we can switch them on both from the kitchen itself and from the porch. 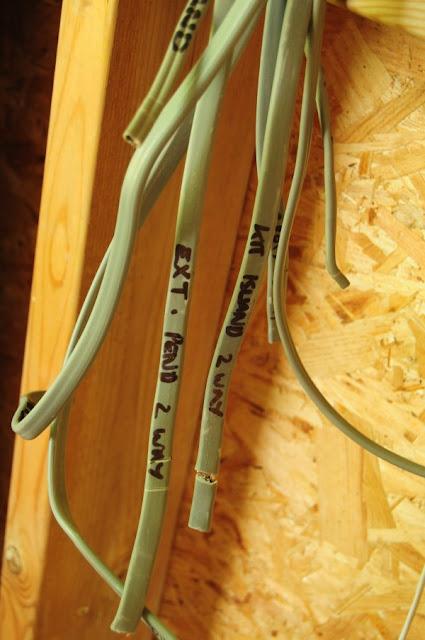 These are coming up through the floor next to the new island.  I think one is an electricity cable; the other a BT cable.  Maybe. 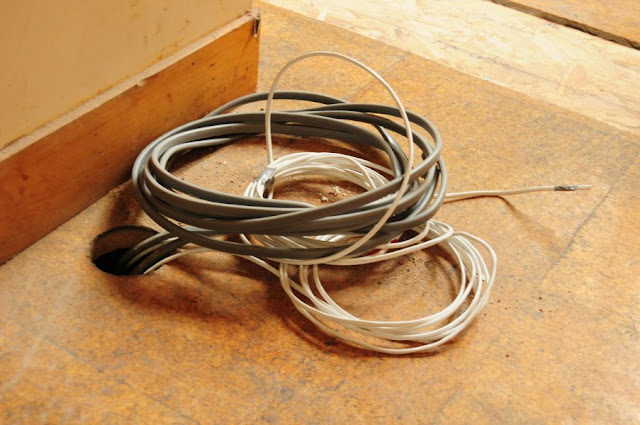 And from that hole came a really sweet cross-section of our skanky old cork floor!  Definitely one for the mantlepiece. 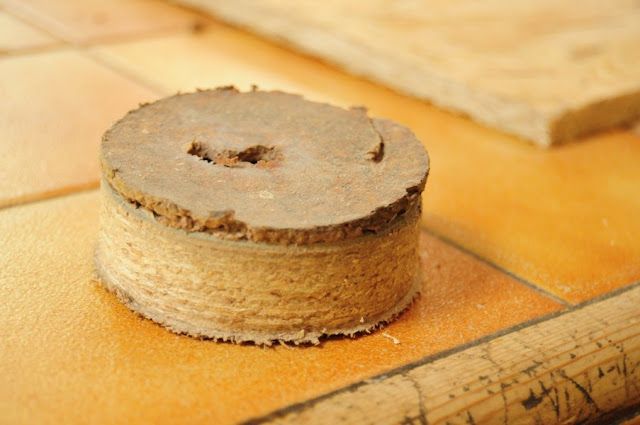 A couple of days ago, the builders dragged some of the old units around to give us an idea of what the new layout will look like.  This picture (below) is looking from the living room.  We're having a sort of L-shaped island.  Those holes in the side of the island unit were just to allow the mice our cats brought in to get into the cupboard where we kept vegetables. 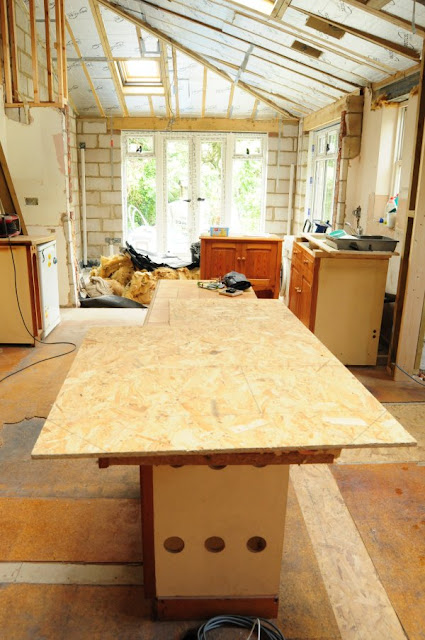 And this is it viewed from the extension.  (On reflection, I'm not sure we're going to be able to fit the cross-section of our skanky old floor on the mantlepiece.)  I was making dinner here last night.  It is lovely to be able to walk straight into the larder, rather than having to run round the breakfast bar.

I won't be sorry to see that bit of black plastic sheeting go though - I am always bumping my head on it.  Not that it hurts to do so - you just feel a fool when there's someone sitting on the sofa in the living room looking on. 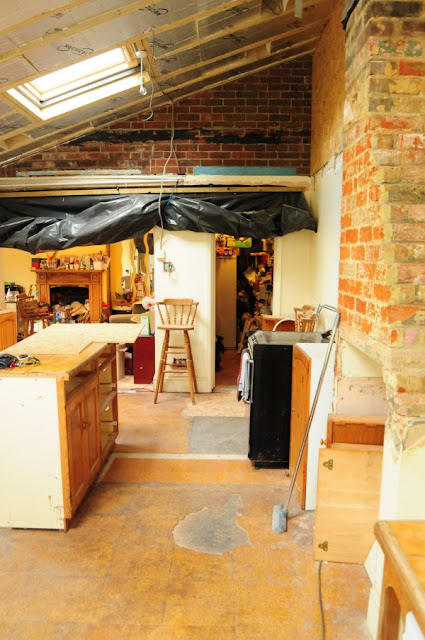 And finally, we are going to have a few units running across the kitchen, between the original kitchen and the extension - partly to divide up what is going to be a big space, and partly because we need the extra cupboard space.  Originally these extra cupboards were going to be on the left side, but by having them on the right, we can avoid the problem of the dreaded corner cupboard.  That corner unit, which can't have a door at the front, will be installed back to front, so it can have a door opening into the extension. 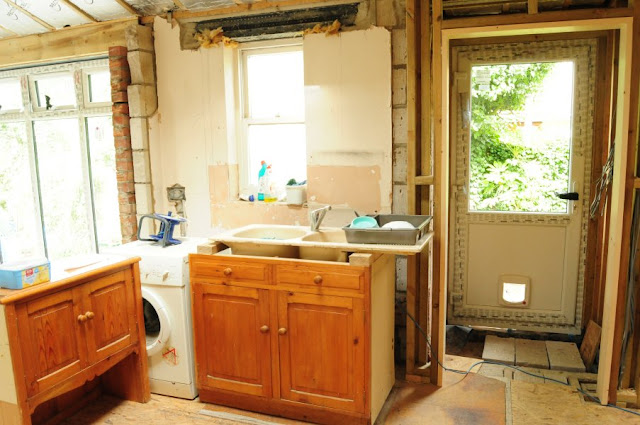 I haven't gotton much done this week at all.  Not only is the lack of nicotine making me dither, but the building work is very distracting.  The one good thing is that I think I have just about managed to come up with a way of doing the legs of the birds.  It's not particularly visually impressive, but it does create the right kind of 'feel' if you know what I mean.

And I have come up with a new card-making idea, which I'm quite chuffed with.  Hopefully, I will have something to show for it soon!
Posted by Ruth at 17:45

Ah! So the washing up isn't necessarily connected to the rest of the kitchen? Or the food prep bit? (Making it someone elses job?)

Do you need a mantelpiece extension too?