For the benefit of far-flung relatives, here is a picture of our new kitchen sink!  The surfaces around it are incomplete, there's no draining board or splash back, or cupboard doors, and the pipework is leaking, but it's a lovely space.

Both the builders who were working on our kitchen units are off work with bad backs - perhaps due to lugging that humungous sink around the kitchen - so further progress will have to wait. 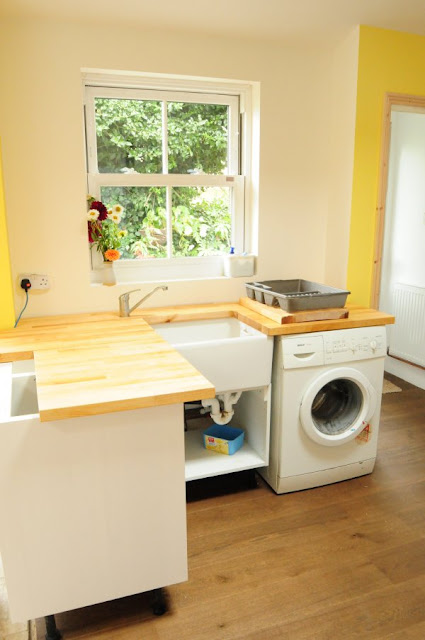 As for the bear-making, I have embarked on the ambitious project of making eight of these bears - the idea being that I will have four at the Art & Craft Centre and four at the Christmas Barn.  I can't say that they were particularly popular among people I know when I first made them, but they did make lots of people smile at the Clare Priory Craft Fair, and the original three that I made have all found homes.

Anyway, it's a bit like treading water - I just can't make eight bears quickly.  I don't think I'm going to have as much stock as I would like for the Christmas Barn (which I believe opens in October), but no surprises there.  Hopefully, I can continue adding to the stock there right up until Christmas.
Posted by Ruth at 15:40

That looks lovely.
Just what you need for the washing up!

We certainly get a lot more washing up in it. Unfortunately, the temptation is to leave the job until the sink is full of dirty dishes!

It's also slightly too low, I think. You have to bend over to wash up.

Also looks slightly odd with the work bench coming out like that, doesn't make it slightly uncomfortable to wash up? also, where is it exactly? you can't quite tell from the photo

Hmmm? No, no, that's just the angle I've taken the picture from, I think. There's plenty of room round the sink.

See the doorway on the right? That's where the original back door was. The sink is in the same place as the old cloakroom sink.