I seem to have done a lot of running round today, without actually getting much done.  I had this plan for the stall, and I have a slightly doomed feeling about it.  Anytime I do anything structural (not related to teddy bears), that's the way it goes: I have grand ideas which I am absolutely determined to carry out - in spite of all advice to the contrary - and then it goes terribly wrong and ends up being just ostentatious and ineffective.

As you can see, I'm approaching this with my usual positive, can-do attitude(!)

I was looking at the paperwork that I was sent for this craft fair, and it looks like we have not been allocated the space we had the previous two years.  It's a shame because it was a great space for what we are.  I have the bears and my mother will be there, in the same gazebo, face-painting.  The previous two years we've been on a corner, between a main thoroughfare and a much smaller less-used path.  In fact, I'm not even sure it was a path at all (it involved stepping over the flowerbed).  Anyway, the point is there was plenty of space for my mother to face-paint in the sunshine, and for children to queue.

This time however, we seem to have been put in the opposite space - again on a corner, but effectively between two busy thoroughfares.  So the only place for the face-painting queue to go will be along the side of the gazebo, in front of the smaller of my bear tables.

So that isn't exactly filling me with confidence for the event, but we'll see how it goes.

Anyway, so I went out to buy MDF and a bunch of big plastic flower pots, pushed the furniture back against the walls, and set it all up on the floor.  Obviously there will be tables underneath it all, and tablecloths over it all.  And I've taken the picture from the stallholder's perspective (i.e. behind the stall), rather than the customer's (why, I don't know).  But this is what I'm hoping it will look like.  Basically there are just two broad steps, which I am going to cram with bears, elephants, rabbits, etc.  (Maybe even a meerkat - maybe not.)

At some point, I know, someone (probably me) will lean on one corner and catapult the bears up in the air. 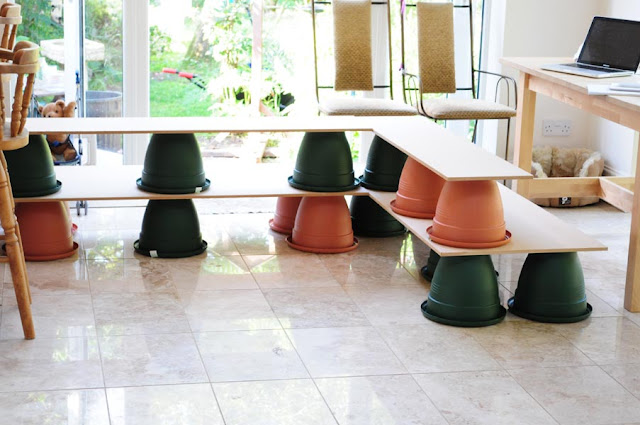