The trouble with this 'one of a kind' thing is that I only have something to blog about once in blue moon.  But then maybe it's a relief to my three readers, not to have to look at the same design of bear rendered over again and again.  Well, I do have something new to show this time - although it's still unfinished.

It is my meerkat!  It's all very tentative; I almost gave up and scrapped him lots of times, but I reasoned that I wouldn't know what my mistakes were unless I actually made them.  A feeling of "Hmmm, this isn't going well" isn't very helpful.  Actually though, I'm very chuffed with him so far.  He definitely lacks something in terms of detail, but it's always been the shape and the pattern that I've been most interested in.

I took photos throughout the process, whatever the time of day, so please excuse the poor quality of some of them.

This first picture (below), is the face made in cotton, with the eyes.  I did dye the cotton to match the mohair, but it didn't take the dye very effectively. 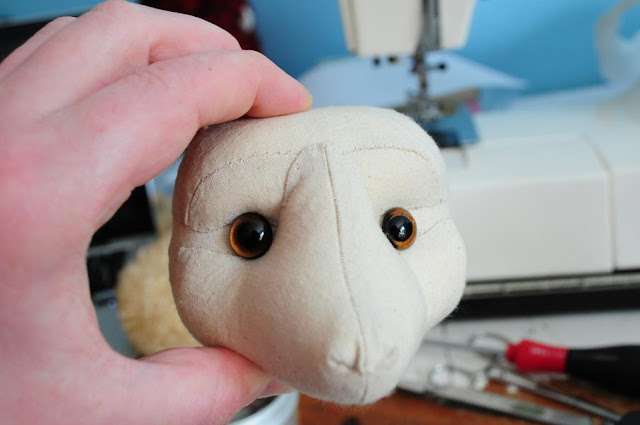 This next one is with the back of his head and his neck added.  That's the prototype in the background. 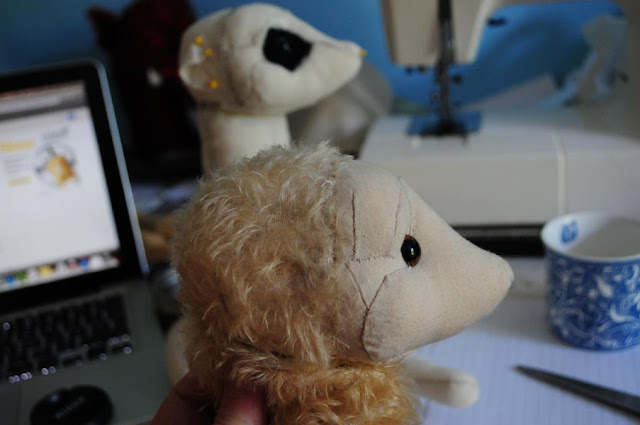 And from the top.  This doesn't really work very well.  He has a very bald face(!)  I had intended just to needle felt around the eyes, but I think I might do the entire face. 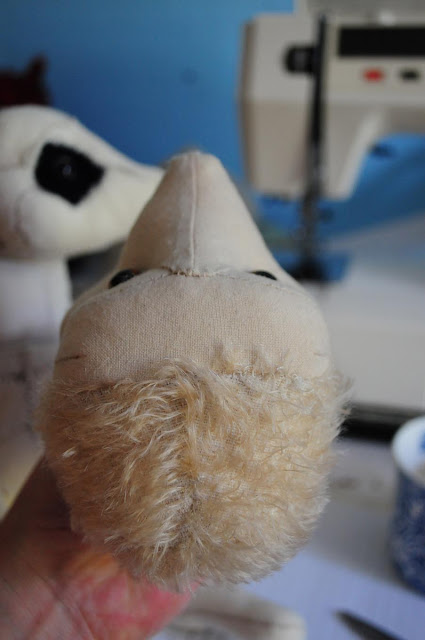 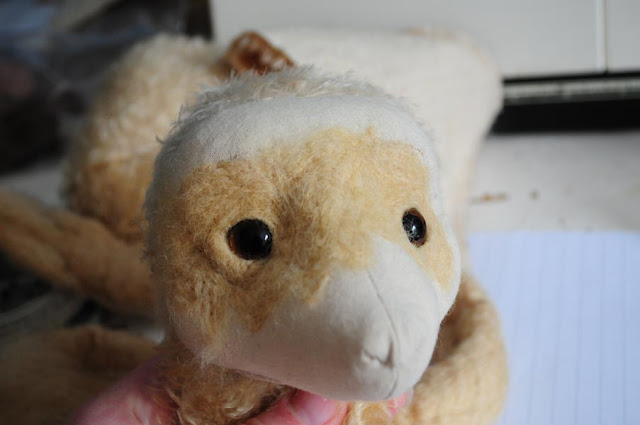 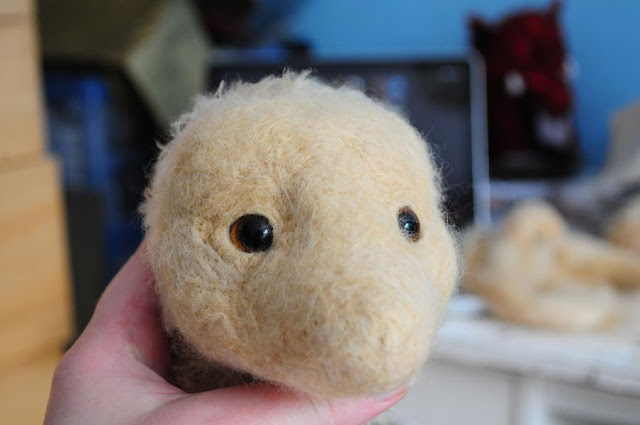 The wool felt took the dye better than the mohair, so there is a very pronounced colour difference.  I can probably minimise this by adding the dye directly to the head, but I think the difference will always be noticeable. 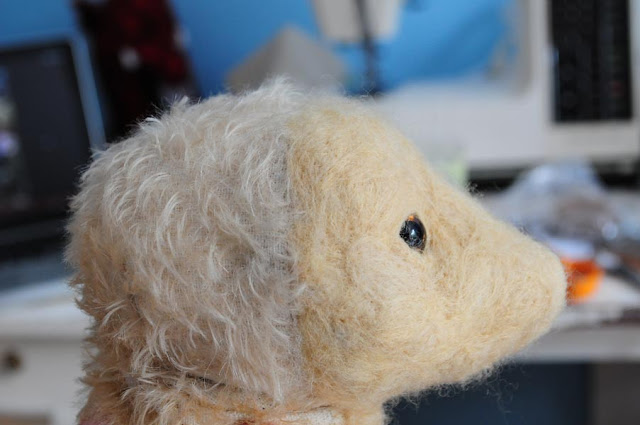 With his eyes painted :-(.  This definitely lacks subtlety. 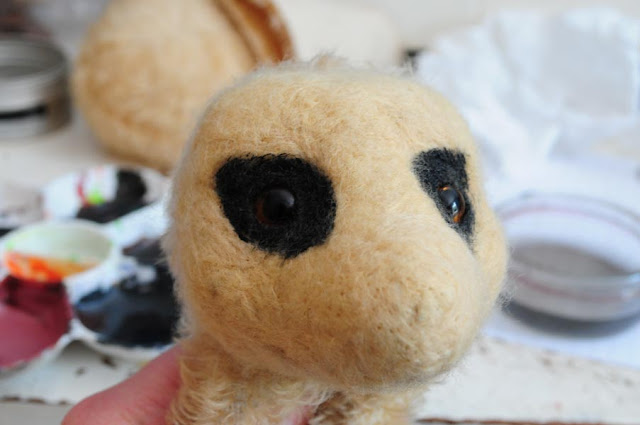 The eyes do look marginally better when I add the black nose and ears.  I can soften the edges of the eye patches slightly with the wool roving. 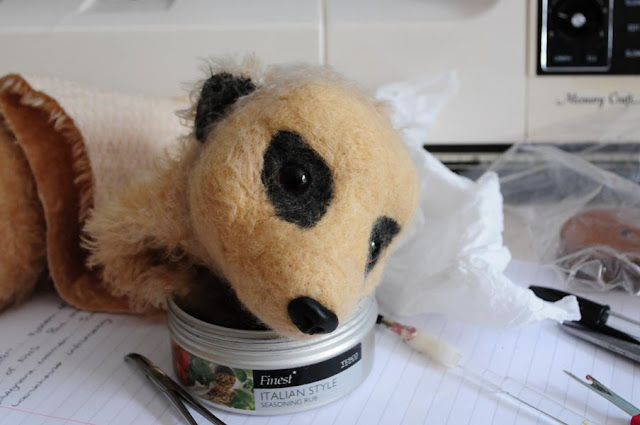 And here he is with head and neck and body all joined up!  I love the S-shaped form.  He is weighted at the base, so he reminds me of a skittle, without his arms and legs.  Anyway, the arms and legs come next.  I will be working over the weekend, so I probably won't get much more done until Monday.  Will be back to update then! 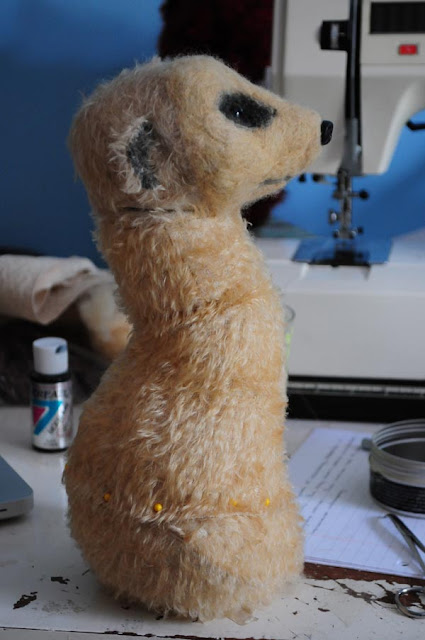 Email ThisBlogThis!Share to TwitterShare to FacebookShare to Pinterest
Labels: meerkat

He's looking awesome! I'm so glad to see more progress pictures. I can't wait to see him with his arms and legs.

Another vote for the meerkat! I like his understated ears