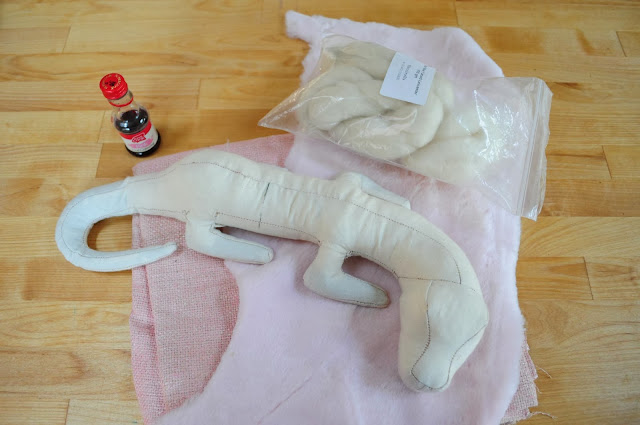 I've done that thing again where - after spending ages making models of a particular creature and trying to get the pattern right - I get annoyed with it and decide to leave it for a while, but whilst I'm doing something else and determinedly not looking at it, it sits on my desk and stares at me, and I start getting really attached to it.

Somebody asked me to make them a luck dragon - Falkor, from the film Never Ending Story.  He's a strange-looking creature to be sure - rather more lizard-y than dragon-like.  I hope the customer likes lizards, because this one really does resemble a lizard.

I started off filling the tail with steel shot, because when you pick up the end of it, it falls back with a satisfying thump.  With just the tail weighted though, he was strange to hold - the body seemed rather stiff and unrealistic.  I then tried weighting both the body and the head, so he sort of 'hangs' through your hands when you pick him up.  But still the polyester-stuffed body seemed duff.  Finally I tried filling the entire thing with steel shot.  I could barely pick him up, but it was a vast improvement, and from there it's been an experiment in how much steel shot I can remove, without ruining that heavy, saggy, reptilian effect.  If I can get him down under 2 kilos, he will be so much cheaper to post!

He doesn't look much in the photo - it's the way he feels when you pick him up that really works for me.  But hopefully when he is made in pink, he will be pretty as well as tactile.  I have ordered some pink sequins for him, since Falkor looks a bit glittery in the film stills (see my Pinterest board, here) and I will hopefully be able to needle-felt his face to give that wrinkled, wizened look.
Posted by Ruth at 11:28