On Wednesday I made pizza, from a dough recipe in the Dan Lepard book.  It was pretty good but, despite my efforts to split the recipe, there was tons left after the first pizza, so I ended up having to have it for lunch again today, and then slinging out the rest.  I really could not manage to eat even one more slice of pizza, even if you paid me.

Tonight I wanted to try nut burgers.  I picked this recipe; partly because I was so tickled by the idea of using rice crispies, and partly because they look (in the picture on their website) so much like the burgers we buy from the supermarket - which I love.

Mine look a bit like flapjack - with mushrooms in. 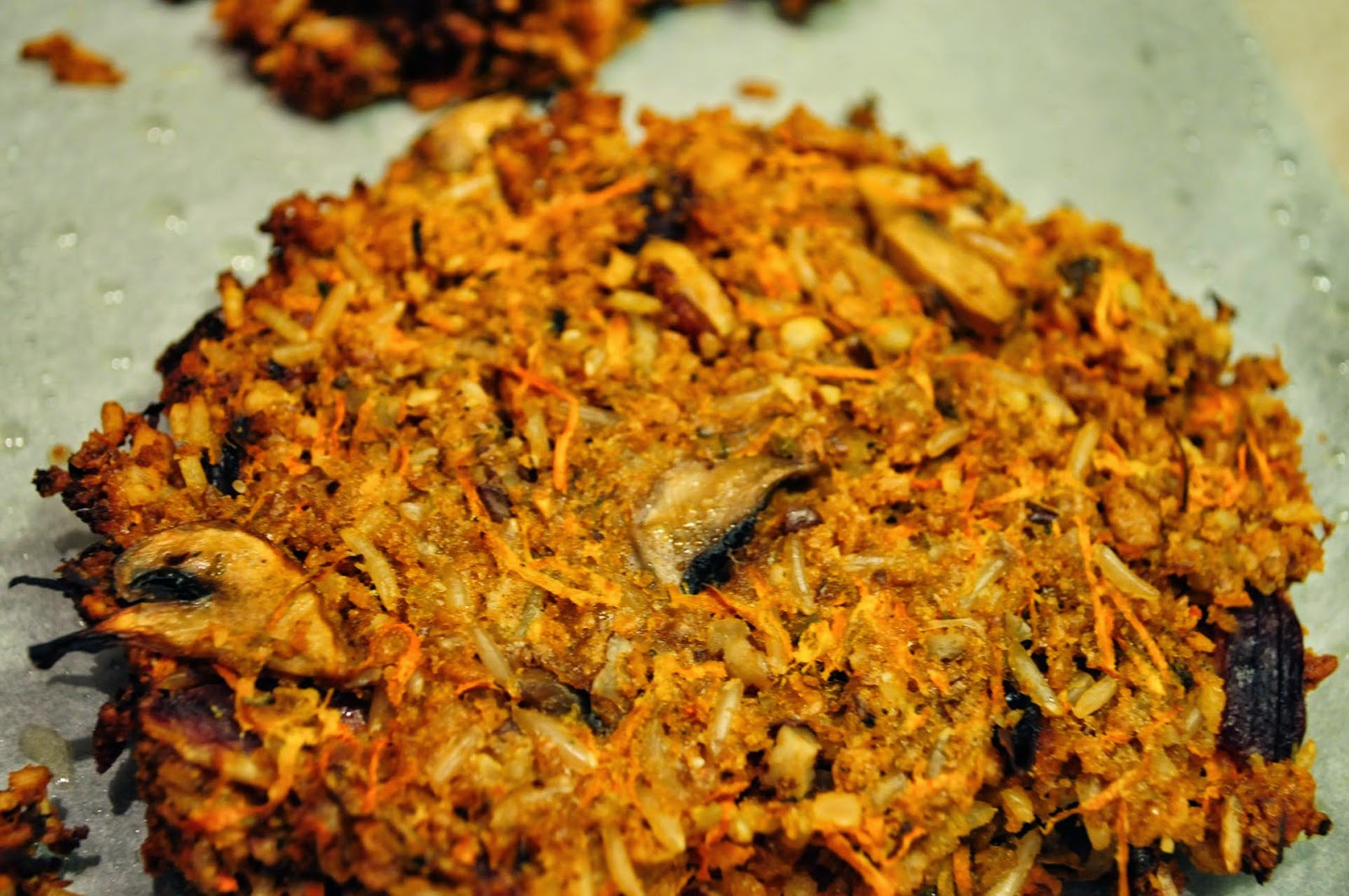 Clearly I got confused with the measurements somewhere.  First I assumed they were talking in grams.  Then I looked again and panicked when I realised they were measuring things in millilitres.  I switched units and measured everything again.  Turns out millilitres are quite similar to grams(?)

However, even with the listed quantities halved, that still meant 375ml of rice crispies - almost an entire box!  You're supposed to stick all the ingredients in a food processor, but I could only fit about a quarter of the rice crispies in.  They promptly jammed up the blade and I had to scrape everything out and start again, processing just a few spoonfuls of the stuff at a time.  To make matters worse, I kept forgetting to put the lid on, and shooting rice crispies up in the air every time I turned the machine on.  I'm still picking them out of my hair now.

By this point it had become evident that the handful of rice crispies I had managed to get through the food processor were all I would need.  And actually, when I mixed everything together, it looked and tasted much like the supermarket version - I could have eaten the mixture raw.  In fact, as with the stuffed courgettes, I probably should have done.

The finished burgers turned out to be quite dry - I think I did still use too many rice crispies(!)  And they went crunchy round the edges - in a hard, inedible kind of way.

Does it sound too outlandish to suggest that these be wrapped in paper and steamed, instead of crisped in the oven?  I wonder too why I bothered trying to shape them into burgers - why not just roll them into little balls like falafels?

Anyway, I will definitely try this recipe again - albeit with just a fraction of the recommended dosage of rice crispies.

The extra mixture, naturally!
So after all this cooking, are you going to give up the moment mum steps through the door? or do you have a welcome home dish planned?
She has left Puerto, so you should see her sometime tomorrow night, that is if she remembers to call for someone to pick her up at Colchester.

I had a welcome home dish planned - but I thought she would be home Saturday, so I made a lovely lemon tart yesterday and it's almost finished!

But yes, I'm going to give up on the adventurous cooking - I haven't managed to get barely any actual work done this week!

And I'm looking forward to getting back to stir fries every night! :-)