I have no way of sharing this picture without also showing the hideous amount of junk in the background, so many apologies for that. 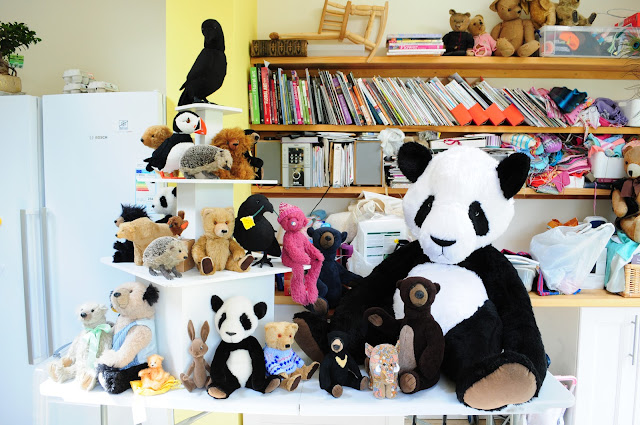 I am practicing for the Stratford fair this Sunday.  For once, I am in the wonderful position of having too many bears to sell - mostly because the panda takes up half the table(!)

I have been debating whether to spread things out and give them plenty of space (leaving half the stock in crates under the table, ready to fill any gaps) or whether to cram everything on, willy-nilly.  The latter isn't my usual style, but actually I quite like the way this looks.  So long as I don't try to create any patterns, putting like with like or collecting colours together, I think I can get away with calling it eclectic rather than crammed.

I am just finishing a puffin, and starting a little pink bear, and hopefully I'll have the time to make another little moon bear - and perhaps another hare - before the show.  Then, once this weekend is over, I must make crows again.  I still have someone waiting for one.