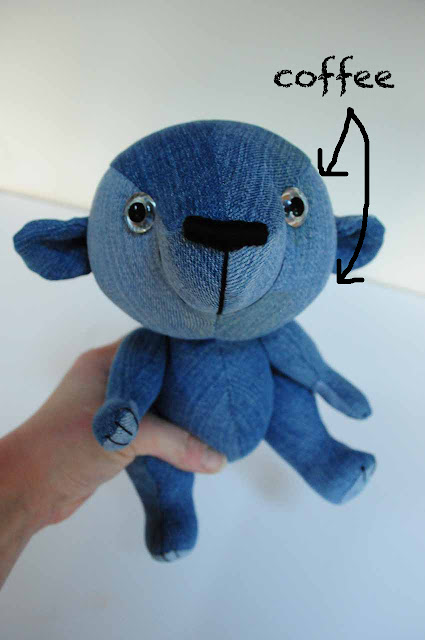 After my post on pricing, I decided I needed to experiment with making bears in non-mohair fabrics, and Toppy the recycled denim bear is the first result!  There are more pictures of him at the end of the post.

I'm still going back and forward over whether I like him or not.  I do love the shape of his face, but I find the rest of him over-shaped, if that makes sense.  Without fur to soften his outline, he looks a bit strange.  It's like seeing someone in head-to-toe lycra and suddenly realising they have bow legs!  And to add to his disadvantages, I managed to spill coffee on him (I'm sorry Toppy)! I did wipe him down, but he now has a coffee stain over one side of his forehead, and another under his chin.  He is clearly destined to stay with me.

In line with my new, hyper on-top-of-the-business-end-of-things mentality, I sat down and carefully worked out how much he cost me to make.  Although his materials and components only come to about £11, the bottom line is that he still took 9 hours to make, so his total cost is around £71.  That seems waaay too much for a denim bear!

So poor Toppy is unsellable all round.  However, he did highlight something that (strangely) I hadn't really thought about before: that the problem is not just expensive materials, but also an expensive 'making' process.

When I began making teddy bears, I started from the point of view that collectible bears should be entirely one of a kind - as in, rip up the pattern and start from scratch every time.  This changed pretty quickly when I got a permanent unit at the Art & Craft Centre - I needed more bears than I had time to design, and I needed the prices to be lower for my new non-collecting customers.  In spite of this, I still like to think of them as one of a kind, and this continues to affect the production side of my business.

For instance, how can you make one of a kind bears on an assembly line?  Surely you can't - surely they all have to be made individually, one at a time!

I have been re-thinking this attitude recently.  Most of what I make is no longer truly one of a kind, although of course everything tends to turn out slightly differently due to the vagaries of the hand-making process.  I do try to give each bear his own character, but this is primarily in the features of the face.  In other words, most of the bear could be made using an assembly line method, so long as the faces are considered individually.  This isn't cheating (so I keep telling myself!) - I won't be doing any thing different to the bear - I'll just be doing it more efficiently.  And less expensively.

So, I am going to try to (ahem) streamline my production process and significantly reduce the amount  of time I need to charge for, for the making of any one bear.  I have been thinking about this quite a lot, and researching how I can speed things up.  There are 6 things I think I could do.

(1)  As above, use an assembly line process - i.e. cutting out a number of any one design, and doing all like processes together.  I'm hoping(!) this will be quicker.

(2)  Planning.  I seem to waste a lot of time faffing over what to make next.  Not only that but, having made a decision and started work, I often have to stop when I find that I've run out of one of the components.  It should be possible to get a good idea of what I need to make (and how many) by looking over past sales.  Having decided how many I need to make, I can then make sure I have enough of the fabric and other components before I start.

(3)  Don't watch TV.  It sounds fairly obvious, but much of the sewing I do is just simple straight lines - many, many of them(!) - which is incredibly tedious.  I often go into Youtube or BBC iPlayer and put on something to play in the background to keep my mind occupied.  Except that it never really is 'in the background'.    I half watch and half sew, and end up working at half speed.  Podcasts or radio programmes - preferably pre-planned so I don't spend ages searching for them - are a better idea.

(4)  Take regular short breaks.  Apparently it's supposed to be quite effective to take a 5 minute break every 25 minutes or so, and then - after a couple of hours - a longer, 15-20 minute break.  I tend to cruise along at a fairly slow, even pace, breaking only for lunch and to refill my coffee cup (I'm sorry Toppy!) but I can see the logic in regular breaks.  If nothing else, it should make one more aware of how much time a particular task is taking.

(5)  Stop using pins.  When I was searching for ways of speeding up my sewing, this kept cropping up.  The websites I visited claimed that professional seamstresses and industrial 'sewists' (my spellcheck just changed this to 'industrial sexists' ) very rarely use pins, and that you are not only quicker, but have more control if you're guiding the fabric with just your fingers.  I'm not sure whether that applies with bear making - the pile does make a difference - but certainly I seem to spend an inordinate amount of time pinning.  Not pinning would speed things up massively.

(6)  Mechanise the cutting out of pieces.  I spend literally hours cutting out pieces!  When you're cutting out fur fabrics, you have to do it in tiny snips in order to avoid cutting the actual fur (as opposed to just the cotton backing), so it takes much longer than you'd expect.  It should be quicker with non-fur fabrics anyway, and if I could find a way of doing it with a die cutter, that would be so much faster!  I know someone who has the kind of die cutter that you can scan shapes into, to create the dies, so I am going to beg a favour and ask her to try this.

So, this is my cunning plan for becoming more efficient in the way I make bears!  The ultimate aim is to get to a better, more sustainable, place as far as profit margins are concerned.  I will let you know how it goes.  In the meantime, here are some more pics of happy little Toppy - and if you want to see some of the other creatures I have available at the moment, you can find them in my Etsy shop. 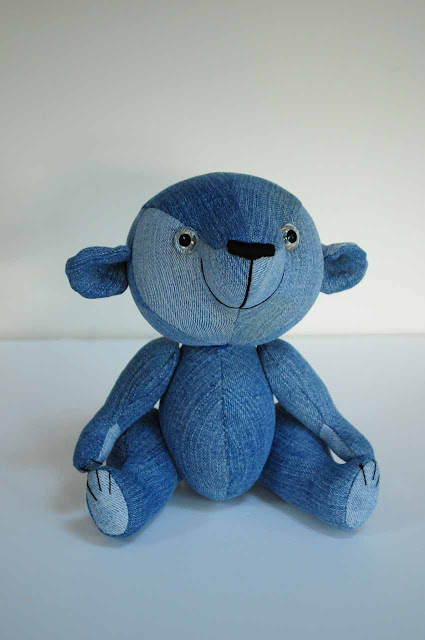 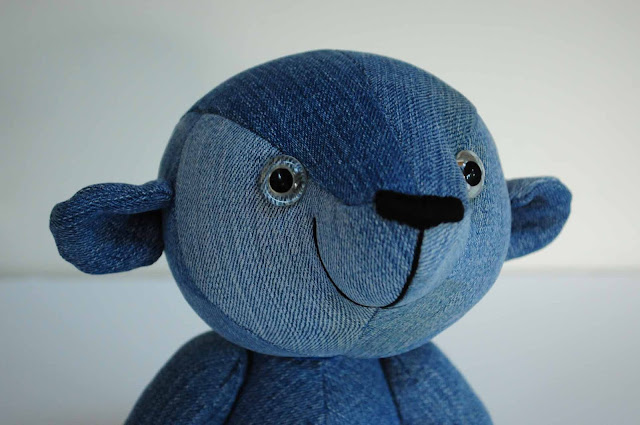 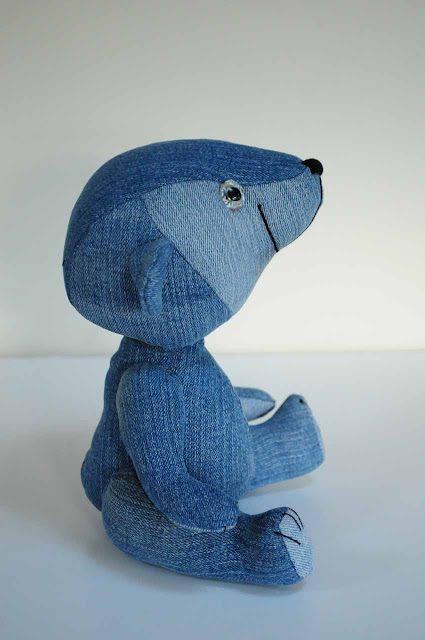 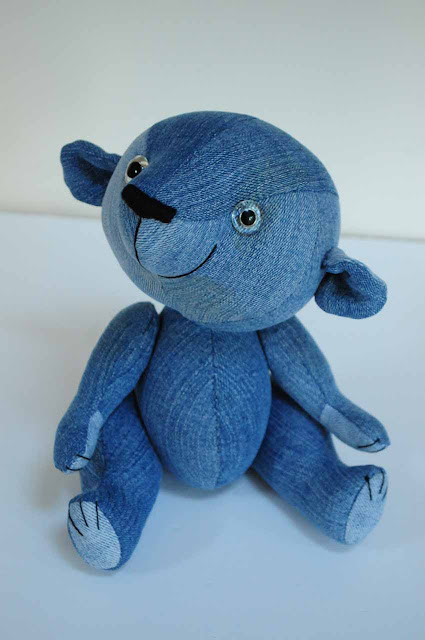 That's great advice about not watching something while working. Its true that it's never really background noise. I'd love to hear how your experiment turns out, especially the part about die cutting.