One of my favourite blogs is that of Ann Wood and, a couple of months ago she began a sketchbook challenge, where she undertook to draw or paint something every day for a year.  See her original post on this here.  I have read similar things by people who write - for example, Jack London and Henry Miller both thought that, if you want to write seriously, you need to make a habit out of it.  You need to do it every day, rain or shine, regardless of whether you're 'in the mood'.  It doesn't matter if you're writing rubbish - the point is that you're making yourself comfortable with the act of writing so that, when inspiration does strike, there's nothing to stop you taking advantage of it.

I'm always distracted by this kind of talk because I used to love writing and, although I don't really enjoy it in the same way anymore, I still wonder sometimes if I could be a writer of some kind.

However, as it turns out, I'm not a writer; I am a designer and maker of teddy bears and other creatures.  The 'designer' bit comes rather sporadically though.  I have been thinking for a long while that perhaps I ought to try to set aside time - not just hours or days, but a period of months - for working on new designs.  However, I suspect design is similar to the examples given above of painting and writing - it's something you need to do doggedly, repeatedly, over and over again, to stand any chance of getting really good.

So, how about a challenge!

Designing every day would really leave no time for anything else, and designing a whole bear - even just every week - would be similarly hobbling.  So how about trying to design a feature of some kind every week?

I have many more examples of thing I would like to try, which would fit this challenge perfectly.  I could make them on their own - e.g. a particular limb shape - or graft them on to an existing pattern where required (as with the spare tyre, above).

It doesn't have to be something big - just something which allows me to  discover something new.  And I'm not going to set a time limit.  It will just be an ongoing challenge, for however long it lasts.

I have made a start on this!  Almost exactly a year ago, I made a couple of robins from pieces of scrap mohair.  They were very sweet, and sold quickly, but the design wasn't quite what I wanted it to be... 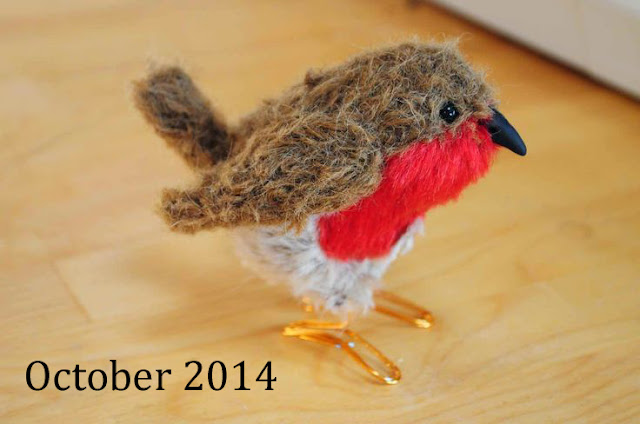 There were a few issues, but the main one is the frontage: she does look a bit like she is sucking her stomach in for the photo(!)  I wanted a really round, fat jolly-looking robin, so I revisited the pattern again this week... 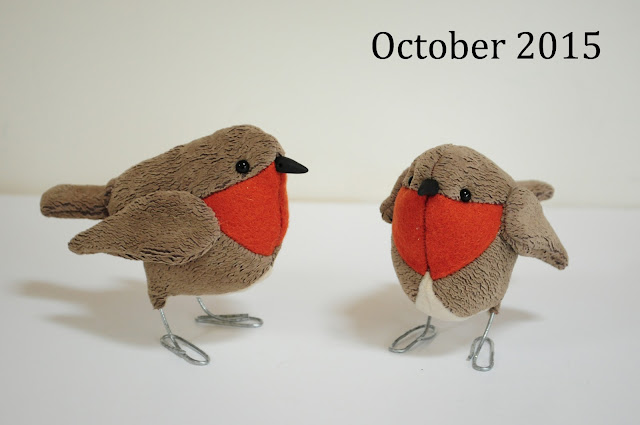 I'm fresh out of red mohair scraps, and I wanted something that was a bit more sustainable anyway.  So the brown is a woven synthetic that I found at Franklins (it has a very slight pile to it); the orange/red is a heavy wool fabric I got from a carpets-and-curtains-shops.  It feels a lot like felt in fact(!) but it is much sturdier than any felt I've seen.

What do you think?  The mohair I used last year definitely added a sort of shaggy charm (but then mohair always does), but when I was making these robins I was trying to think of something that I would want to put on a Christmas tree.  We don't usually have a tree, but if we did (and if these had loops for hanging), I think they would be perfect.  The markings are a lot clearer than on the mohair version, so I think they'd stand out better among the pine needles and the other decorations.

Most importantly, the shape of the stomach is much better.
Posted by Ruth at 11:15