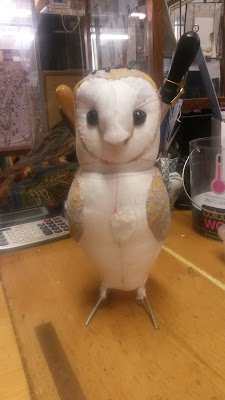 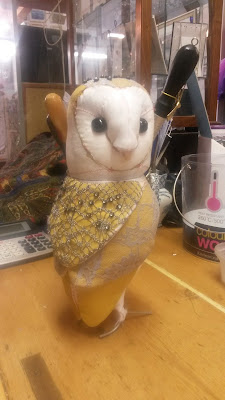 Good morning!  I came to work today, bringing my barn owl with me, but inadvertantly leaving my camera at home - so excuse the phone pics.  His face also looks a bit weird (flat-sided) in the photos because I've sewn up the opening at the back, and since it was so frayed from all the changes I've made to him, it took a lot more fabric than it should have done.

He seems to be taking so long - but then I guess I always think that when I'm trying something new.  I sat down a couple of days ago and tried to plan it out.  Really I should be making bears for the big Hugglets show, on 28th February, but I'd really like to have the owl on my stall!  I've decided to give him two weeks - this week just gone, and the next one.  If he's not practically done by then, I shall put him aside and move on to something else, then come back to him later.

The thing is, there's a big international teddy bear competition coming up, which actually has an owl category.  I never have much luck with these things - and they cost a bit to enter - but it seems silly not to enter, since I happen to be making an owl at the moment.  However, the deadline for entry is right at the beginning of March, so if he's not done for Hugglets, there won't be a lot of time to finish him for the competition.  So, I'd better get a move on!

I have made progress since I posted last: I have added what I can only describe as a 'nose guard'.  In a lot of the pictures of barn owls that I've been looking at, you can't actually see much of the beak at all - it's covered by the fluffiness of the nose.  Since I can't guarantee that my final fabric with be sufficiently fluffy (I wasn't even intending to use a fur fabric for him), I thought I'd best go for a separate piece, applied over the top.  It sort of works.  He looks a lot more... nosey (nasal?) now - rather than beaky - which is the effect I was trying to get.  I think I'll just have to be careful about stitching it on - he's in danger of looking like he's got a big sticking plaster over his nose.

I've also made a stab at colour and pattern.  I slapped on some yellow paint to get the colour.  The pattern thing is more difficult.  Hand-painting never seems to work for me - it just lacks subtly.  What I really need is an airbrush, which I do have but I've never learned how to use.  It struck me though that the barn owl feather pattern looks a bit lacey, and even slightly bejewelled (they have a lovely, tiny, luminous, black/white spot pattern over their head and shoulders - see my owl Pinterest board here), so I bought some grey lace and overlaid it onto the back of the head and the feather pieces.  Then I glued little black-rimmed rhinestones onto it.

I'm still trying to get used to it.  He's taken rather an unexpected turn - he suddenly looks rather boudoir, with all that lace!  But whilst I'm sort of beginning to buy the lace thing, the rhinestones still look to me like lots of little ants.  Really, the decoration needs to be flat.  Sequins perhaps?

Anyway, hope to be back to soon, with a more finished-looking barn owl!