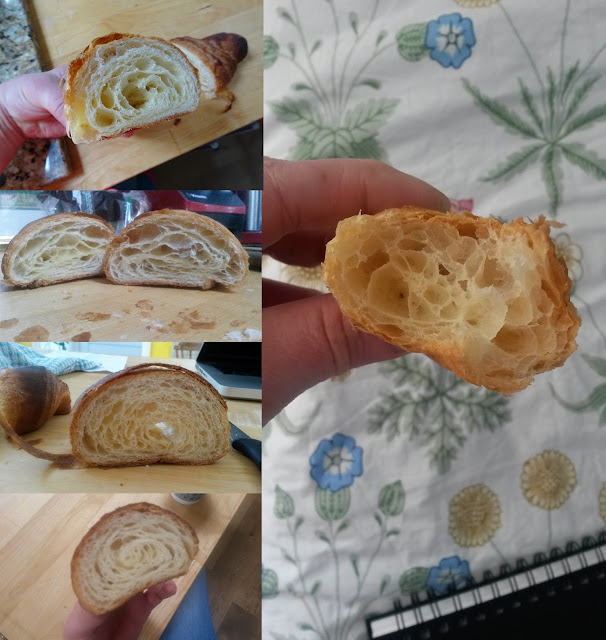 Yesterday I made croissants again.  They do seem to be slowly improving.  In the pictures above, the gorgeous croissant on the right with the perfect honeycomb structure is the shop-bought version. The series of pictures on the left are mine - the one at the top being yesterday's.

It's all been about trying to get bigger and more evenly spaced air holes in the crumb.  I made a lot of croissants like the one at the bottom left.  They were always a bit moist, so I tried reducing the hydration and adding butter to the actual dough (rather than between the layers of dough), and got the result second from the bottom.  Then something - not sure what - went a bit wrong and I got the flattened version second from the top.  Working on the basis that the added butter was preventing the formation of a strong gluten network and therefore allowing it to collapse slightly, I decreased the amount of butter and got the result at the top left.  It doesn't look too bad to me.  Apparently, I'm still smooshing some of the layers together, and a longer proving time may help.  I also need to work on getting a crisper crust.

The next attempt will have to wait for a little while however.  I seem to be in the middle of a bit of a work crisis.  I have been pot washing at two restaurants (both owned by the same person) and it was all going relatively smoothly until one of the other kps went away on holiday.  Part of the reason I was taken on in the first place was to cover holidays, but because I'm working in two places, I ended up double-booked.  It's been a real headache to sort out.  One of the places was quite relaxed and flexible about it, the other not so much.  Either way though, I feel like I've been doing a half-arsed job for everybody - including the art & craft centre - where everyone has to be out of the building quickly on a Wednesday so I can rush off to a washing-up shift.  Unsurprisingly, nothing quite goes right under this kind of pressure.

So this week, I gave notice at one of the restaurants - the second job I took on (and the 'not quite so relaxed' one).  It doesn't feel right letting people down, but I feel like I need to make sure I'm honouring my original commitments first and foremost.  There are other reasons too.  If everything goes to plan, I'm starting my course in September. so I'll need time to study for that.  I also have the big Kensington bear fairs - one in September, and one in February - which I need to work towards.  I haven't made anything in a long time: I could really do with clawing back some time to sew bears.

As a result of trying to juggle shifts and make everything fit, I've ended up with five consecutive days of double shifts this week(!)  I may be good for nothing by Sunday night.

Anyway, I'm taking full advantage of my day off today, by doing very little indeed.  We went out for breakfast and I've made a walnut cake from Margaret Costa's Four Seasons book.  I'm also trying a variation on Elizabeth David's bread recipe (and committing a cardinal sin by changing two things at the same time).  I'm increasing the percentage of wholemeal flour in the recipe, and upping the hydration, which is supposed to give you better bread.  I have to say it's looking rather sad and saggy at the moment, so I'm just pinning my hopes on a marvellous 'oven spring'.  Fingers crossed!