Good morning!  When I was at work on Sunday, one of the chefs was talking about how the muffins they made kept turning out wrong, and  whether they were being proved for long enough.  It had me baffled for a good ten minutes.  I was standing there, washing up, thinking, why would you leave muffins to prove?  I've made them loads of times and never proved them, and they always turn out alright.  It was only when I saw them coming out of the oven that the veil of fog lifted - English muffins! 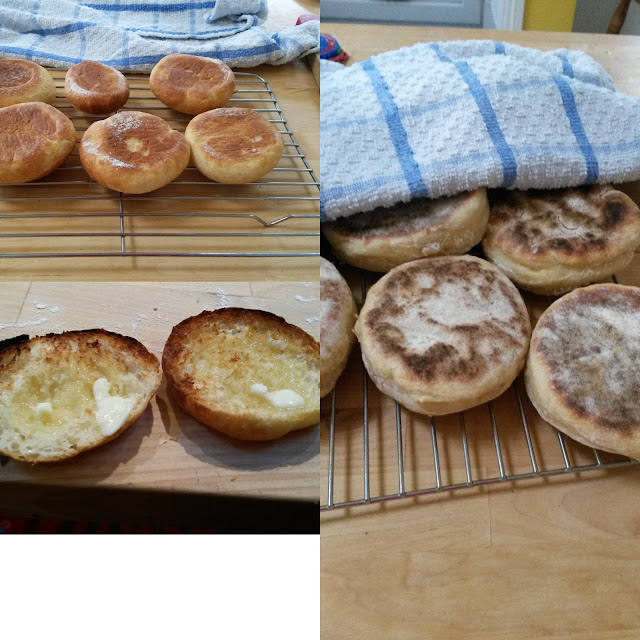 I don't think I've ever tried these before.  As Dan Lepard says, 'since those little [American] cakes in paper cases invaded the supermarket shelves and stole the name, our own little plain bread muffin has become neglected in Britain'.  Embarrassingly, that is true in my experience (it's only thanks to the supermarkets that I actually know what an English muffin looks like: I've often trollied passed them on my way to pick up the American version.)

Anyway, the ones that came out of the oven at the pub on Sunday did look a bit puffy - more like lovely, well-risen bread rolls than muffins.  I went home and looked them up.  The first mystery was why they had been baked in the oven at all.  All the recipes I could find referred to them being cooked on a griddle.  Dan Lepard's cider vinegar muffins are griddled then baked, but I'm almost positive this wasn't the case with the ones at work.  (I have been mistaken before though.  Since the sinks face away from the rest of the kitchen, I probably miss a lot of the important stuff.)  Presumably when they are griddled, the act of flipping them over to cook them on both sides gives them their distinctive flat shape.

I did eventually find a recipe that involved no griddling - by P. J. Hamel, on the King Arthur Flour blog, here.  In this case, the muffins are kept flat by proving (and initially baking them) with a baking tray placed over the top to prevent them rising too high.  They're also flipped over (trays and all) after 10 minutes, to cook on the other side.

I tested both versions yesterday, and the results are shown in the pictures above.  The photo on the right is the Dan Lepard griddled/baked variety, from his book Short and Sweet: The Best of Home Baking.  Both photos on the left are of Hamel's baked version.  Of the two types, Lepard's are bigger and have the interesting speckled brown/black pattern and puffy white edges which seem very characteristic of English muffins. Hamel's have, dare I say it, a rather boring, evenly-baked appearance, like a flat bread roll.

The biggest difference is in the taste though.  Hamel's muffins don't just look like bread rolls, they taste like them too - albeit with a nice light, airy texture.  The two teaspoons of vinegar that went in them are virtually unnoticeable in a taste test.  By contrast, the cider vinegar muffins - which both contain more vinegar, and were left to prove overnight - have a very noticeable tang.  I'm still not sure whether that's a good thing or not(!)  Apparently sourdough bread has a similar, slightly sour taste but I've never tried that either - clearly something I must remedy.

It's difficult to come to any definite conclusion about the muffins without knowing what they should taste like.  Clearly there are ways of achieving the right look, as above.  I'm not sure I would bother going to extra lengths to achieve a flat shape though, if the end result tastes just like ordinary bread.

I am very good at baking all kinds of delicious goods, but the only thing i cant seem to make is muffins,one time i made them and they turned out so bad that i never tried to tackle them ever again! Can i get some pointers please!