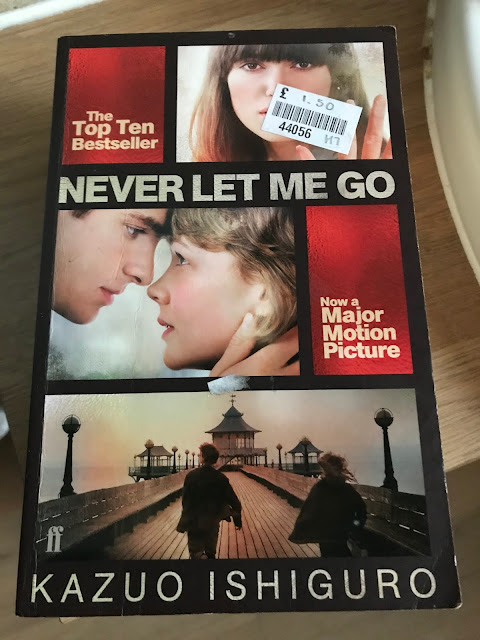 I didn't stop to write about this book immediately after finishing it, and I have a terrible memory so unfortunately (or perhaps fortunately) I don't have as much to say as usual.  I did find the idea interesting - and I particularly liked the way the story was constructed.  Right from the outset, there is clearly something up; an essential bit of information that the narrator is withholding.  It is the slow revelation of this that I found gripping.  I don't think I would have read this book if I had known it was science fiction, but that fact only becomes apparent well into the book - when it's far too late to put it down - and the science fiction part of it is not completely fantastical; it's not difficult to believe in.
In tone, this book reminds me of Rachel Cusk's Outline; unemotional, descriptive; very concerned with the exact details of personal interactions between people.  I was reading some of the reviews of this book and I was surprised at the way the relationship between Kathy, Ruth and Tommy was perceived.  I found the interaction between Kathy and Ruth incredibly... cagey, and competitive.  Towards Tommy, Kathy seems protective, almost like an older sister.  I was a bit surprised when, near the end, Ruth says, '"It should have been you two.  I'm not pretending I didn't always see that.  Of course I did, as far back as I can remember."' (p.228) To me, there never seemed to be much of a spark between Kathy and Tommy.  When they do finally get together as a couple, it's almost like they're going through the motions; it's all a bit mechanical.  So I find all the references to a 'love triangle' or a 'menage a trois' a little over-heated.
There are lots of references online to the film, and the story described doesn't seem quite as I remember it.  I'm going to have to watch it.  Maybe they changed some things - or perhaps I just have a terrible memory. 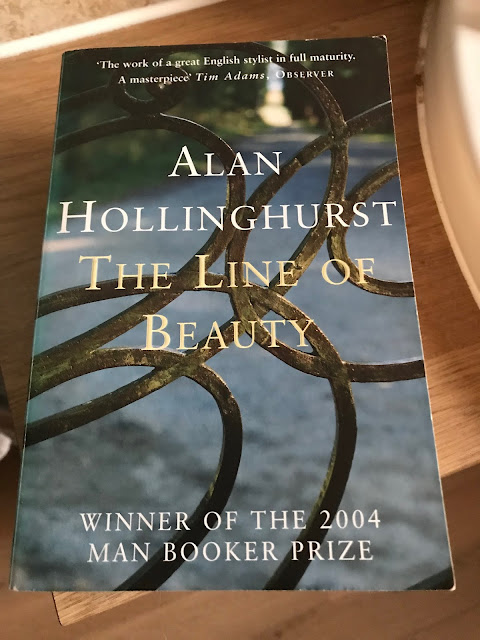 It took me a while to get into this one, but it did take off eventually.  It's the story of a young gay man, Nick Guest, who moves into the  family home of a university friend, whilst he is at college in London.  The friend's father, Gerald Fedden, is a [fictional] Tory MP in Margaret Thatcher's government.  Nick (I wonder if Hollinghurst named him 'Guest' because for much of the book he is a guest in someone else's home) pursues relationships, or sexual encounters, with various people, imbibes copious amounts of cocaine, and generally doesn't do much else: he is an 'aesthete', and apparently mostly decorative.
I found it a strange, disorienting kind of a book.  On the one hand, as Nick rides along in the slipstream of Gerald's career, he doesn't really seem to be doing anything useful himself.  On the other hand, the same could be said of many of the other characters, including Gerald.  None of the principle characters appear to work particularly hard - there are lots of posh parties, expensive holidays, family money/connections, famous artwork, etcetera, but a definite lack of productivity.
I'm not sure whether we're supposed to like these people, or even Nick himself.  He seems incredibly shallow.  When I first started the book and clocked the subject matter - London, rich people, the Tory party under Thatcher - it didn't seem to be my cup of tea.  However, there were things which made Nick quite appealing.  For example, Hollinghurst writes of him thinking of his own demeanour and wishing 'there was a way to distinguish shy from stuck-up - a muddle that had dogged him for years' (p.102); and where he says 'he didn't flinch at the girl's name for Leo, and he had sometimes laboured through whole conversations calling Polly Tompkins [a male college friend] 'she', but he'd never found it as necessary or hilarious as some people did.' (p.108-9)  And when he describes how Nick sees the film Scarface for the first time: 'he saw that he was reacting like his mother, for whom any film on the telly with a sex scene or the word shit in it took on a nearly hostile presence.' (p.168)
However, for much of the book, Nick seems to have a very strange sense of... entitlement; is that the word?  Or perhaps it's better described as a lack of awareness, or concern, over the way his own behaviour impacts on others.  Although he sweats over the prospect of getting caught, there never seems to be a point where he questions the wisdom of taking drugs in someone else's house (that of an MP, no less), or having sex in the communal garden of friends, or in the pool house of their holiday home.  At the end of the book, when everything comes out, Gerald says to him something like, 'Remind me what you're doing here,' and it is a very good question, although perhaps aptly applied to all of them, not just Nick.  So when Nick tries to justify himself by reference to Gerald (who's been caught having an affair), it seems both reasonable and a bit ridiculous.
Apart from this unsettling sort of duality of perspective, there were a few other things that struck me.  His sexuality (a major factor in the story) was unexpected.  The blurb on the back refers just to 'his first experience of romance', and 'a later affair, with a beautiful millionaire'.  So that was a surprise - not a bad one - and it retained it's power to raise my eyebrows (and sometimes the hair on my head) throughout the book.  Whatever else it was, it was quite educational.
The other thing was that I wasn't sure what to make of the family, with whom Nick stays.  Gerald in particular seemed the archetypal Bullingdon Club alumni.  But the wife, the son, the daughter, all seemed like types I've heard described many times before - they're all so rich that they don't care about anything very much, but the women are terribly tragic underneath it all.  I wasn't sure whether they were stereotypes to be cynical of or whether this was a genuine sort of personal style at the time. 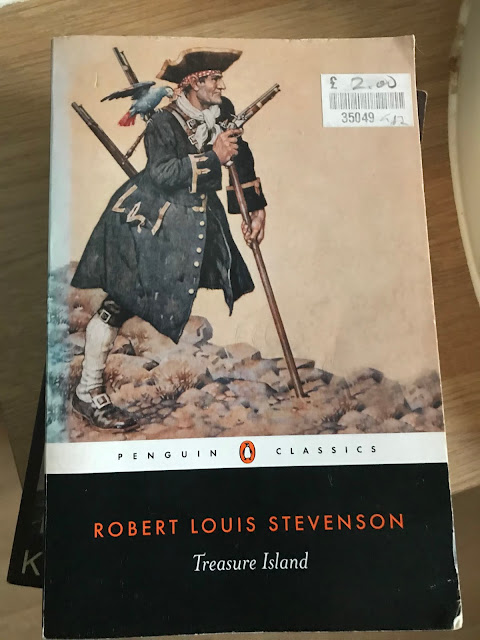 And finally... definitely my favourite of the three; I loved this book (and not just because it was a bargain at £2.00)!

Obviously, it's not completely new to me - I've known about it since I was a child.  I suppose I didn't read it, (a) because it's billed as an adventure story for boys (Stevenson himself, discussing it in the appendix, states that 'women were excluded' (p.193)); (b) because it's written by a Victorian and I find (or I have found) many Victorian novels quite difficult to read - in all their flowery prose.  But I have been reading a lot in the past year, and I've come across a few people who rate Stevenson very highly.  A little while ago, I read Seashaken Houses, by Tom Nancollas - all about lighthouses - (see this post) and discovered that Stevenson came from a family of lighthouse builders, which kindled my interest in him.  Of course, Stevenson himself bucked the family trend: he was tubercular and not physically suited to civil engineering, so he became a writer instead.

At any rate, if I was expecting something childish or boringly verbose, I soon found I was mistaken.  In the first place, Treasure Island, whilst embodying many of my childhood ideas about pirates (indirectly, I suppose, it was probably the source of them) - parrots on shoulders, cutlasses held in teeth, drunkenness, bad language, violence, knotted headscarves, treasure chests, etc, etc - is probably one of the most dramatic books I've read.  I love the bit where the 'hero' (a boy) is paddling after the ship, the Hispaniola, in his little coracle, and it fetches one way then the other, changing course every few moments.  '"Clumsy fellows," said I; "they must still be drunk as owls."' (p.128) It turns out that there's no one in the driver's seat for the two pirates aboard have fought, and one is dead, the other unconscious.  I wonder where 'drunk as owls' comes from; and I like the idea - perpetuated elsewhere - that pirates may actually be very bad sailors.

When the hero (Hawkins) realises that there's no one steering the boat, he decides to board it.  Whilst he's onboard, the unconscious pirate, Israel Hands, comes to, and they talk, and cagily decide that working together to ground the ship would be in both their interests.  In the instant they achieve this tricky manoeuvre however, Hawkins lets his guard down momentarily.  'I might have fallen without a struggle for my life, had not a sudden disquietude seized upon me, and made me turn my head.  Perhaps I had heard a creak, or seen his shadow moving with the tail of my eye; perhaps it was an instinct like a cat's; but, sure enough, when I looked round, there was Hands, already halfway towards me, with the dirk in his right hand... We must both have cried out aloud when our eyes met...'  (p.140)

Thrilling stuff!  I don't really read thrillers, so perhaps this was just new terrain for me, but I don't think I've read another description of the fear of someone creeping up behind you - not for a long time anyway (probably not since I was a child, in fact).  A little further on, Hawkins springs up 'into the mizzen shrouds' (whatever they might be), and Hands follows him, dirk between his teeth, groaning as he drags his wounded leg.  When Hawkins threatens to shoot him, he stops, appears to reconsider - then suddenly flings the dirk at him, pinning him by the shoulder to the mast!  It's all terribly exciting.

Regarding the tendency of the Victorians towards long-winded prose, Treasure Island reminded my of Arthur Conan Doyle and Sherlock Holmes (which was of course an exception to the general rule of Victorian windiness).  The writing was very precise and controlled (although Stevenson does break into excitable nautical jargon at times), with only limited references to scenery.  There's also a funny sort of... what I want to call (not very pithily) 'British armchair adventurousness' about it.  The narrator writes as one who is himself in no imminent danger; also as one who is clear, complacent and unchallenged in his own values (an olde British kind of attitude?  Surely no one's values go unchallenged nowadays).  It's strange: there is much to regret in Britain's history of imperialism, but the arrogance of its practitioners produced some very dry, sturdy, and terribly appealing prose - much like this.