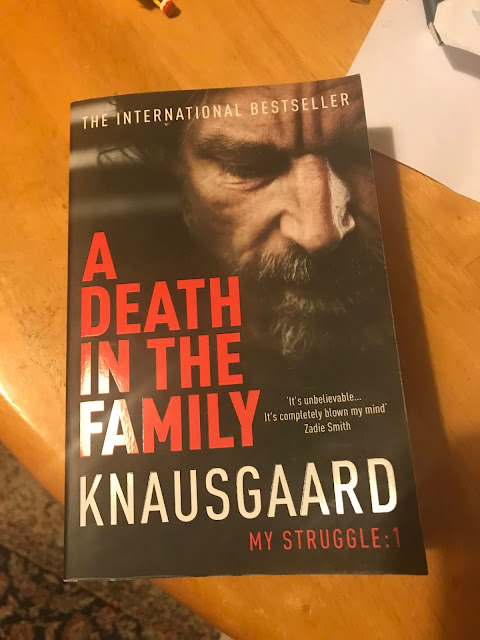 This is another one from the Guardian's best books list.  I wasn't sure about it: as a book about his relationship with his father, Knausgaard certainly makes it quite gripping, although I was never quite sure why he was so scared of him.  As a boy, he seemed to walk forever on egg shells.  I kept expecting some terrible revelation of abuse, which never materialised.  Something awful did happen to his father at the end of his life, and it's rather discomforting to thing that maybe that's what the book needed to make it interesting.
Knausgaard's account of his teenage years I found a bit stuporous, a bit Adrian Mole (albeit with more libido) and he writes with irritating detail about the most mundane things - sitting down to peel an orange, picking up a guitar and strumming a few chords.  Presumably these are the fictionalised parts of the book, but I'm not sure what they add.  I suppose they could be said to provide context and build-up for what happens later, but I did find them a bit hard-going.
In talking about his adult self, although he has the same tendency to describe every movement precisely, I found him more sympathetic.  I suppose he seems like the same personality type, if there is such a thing, as myself - socially inept and a bit depressive(!)  He talks about the experience of travelling and staying with other people: 'at home in our flat everything was us, there was no distance; if I was troubled, the flat was also troubled.  But here there was distance, here the surroundings had nothing to do with me and mine, and they could shield me from whatever was troublesome.' (p.287)  I have felt the same way about some places I have lived (and I remember the late Sally Brompton writing about how, when she was depressed, it seemed to saturate the very fabric of the house), but for my own part, I find other people's troubles, however minor, almost as dismaying as my own.
On social interaction, Knausgaard claims to have gone beyond mere awkwardness, and come out the other side.  He does however recount an incident from his childhood, where his grandmother asked his mother not to let him visit so often: 'since then I have begun to sense what it was that made my presence uncongenial.  I was unable to dissemble, unable to play a role, and the scholarly earnestness I brought into the house was impossible to keep at arm's length in the long run, sooner or later even they would have to engage with it, and the resultant disequilibrium, as their banter never demanded anything at all of me, that was what must have made them ring my mother in the end.' (p.466-67) This sounds true, but also self-indulgent, like he's saying he was just too genuine!
I did like the way he wrote about his relationship with his brother.  In his own (Knausgaard's) mind, his brother 'was not allowed to fail, he was not allowed to make a fool of himself, he was not allowed to show weakness.  When, however, he did, and I was watching, shame-filled, the shame on his behalf still was not the crux; the crux was that he musn't notice, he musn't find out that I harboured such emotions... If he said something stupid or glib it did not change my attitude to him, I didn't judge him differently for that reason, so what went on inside me was based exclusively on the possibility that he might believe I was ashamed of him.' (p.369)
I wanted to write the above before I went Googling to find out what was in the other five volumes of autobiography, and what the critical reaction was to his work.  The latter seems to have been mostly positive - particularly within Norway - and Knausgaard is hailed as having created a new, detailed, confessional way of writing (Elizabeth Wurtzel has been credited with the same).  Perhaps not surprisingly, it seems that the publication of the book caused discord within his family.  Reading around it gave me the impression that the whole thing was some kind of literary experiment, which is perhaps unfortunate given the results. 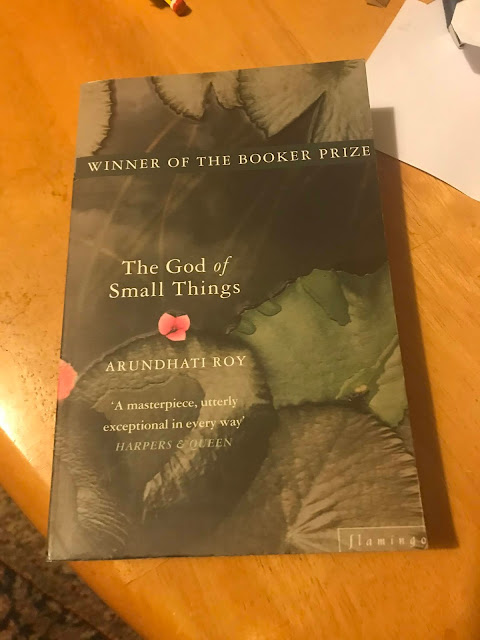 There were lots of things I really loved about this book - primary among them, Roy's wonderful, playful, inventive use of language.  It reminded me a bit of Their Eyes Were Watching God, for its language, although this was more modern with a more complicated plot and non-linear structure.
I also loved it's humour.  There's a wonderful moment where they go into the public toilets, and Rahel's mother suggests she balance in the air above the toilet to pee, because public toilets are dirty.  But she's too small, so they all go in together and her mother and her great auntie hold her over the toilet.  And then she can't go.  (p.95)  And another moment, where they're in the cinema watching The Sound of Music, and the nuns are singing 'How Do You Solve A Problem Like Maria?', and the little boy, Estha, can't help himself; he sings along loudly, causing everyone to turn angrily.  'There was a nun in the audience.' (p.100)
I found the way she describes the outlook of children, their interior world, very convincing.  They go to the airport to meet the twins' uncle's daughter, who is around their age, and Ammu, their mother, gets annoyed with Estha because he omits to say 'how do you do'.  The happy atmosphere is broken and Rahel 'unable to cope with see-sawing changes in her life, had ravelled herself like a sausage into the dirty airport curtain, and wouldn't unravel.  A sausage with Bata sandals.' (p.146)
The bit where Ammu gets annoyed with the twins and speaks harshly to them are absolutely heart-rending - not just because we have a child's eye view, but because she says some really quite terrible things.  '"D'you know what happens when you hurt people?'" Ammu says when Rahel speaks back to her.  '"When you hurt people, they begin to love you less."' (p.112) Of course, Ammu herself is a divorcee - apparently an unenviable position in India at the time - and effectively living on the charity of a family that clearly takes social status and its intricacies quite seriously.  So it's not really surprising that she finds her children a source of stress occasionally.  Roy has a sympathetic backstory for everyone's bad behaviour (with the exception perhaps of Baby Kochamma, the grand-aunt), and the quote with which she prefaces the book is 'Never again will a single story be told as though it's the only one', from John Berger, which would seem to indicate a desire to portray multiple viewpoints and to trace responsibility quite widely.  Having said that, one could argue that there is one character who seems to bear most of the blame in the story.
The thing I found jarring I think, was the police brutality.  There is a great multiplicity of violence at the end; not just physical violence, but relationships destroyed, bridges burned.  Some of it seemed explicable in terms of the story - although no less shocking - as with the great aunt's behaviour towards the twins; the way that Ammu was treated when her transgression was discovered; and the terrible things she says to her children.  However, the police brutality came out of the blue, so to speak.  (Is it me, or were there red herring references to some kind of bus-related disaster?)  Not that police brutality is unbelievable (particularly in the current climate) but because it is un-trailered here, it seems almost like a bare plot device - like a hurricane introduced in the final pages to efficiently achieve the intended conclusion.
I was also a bit nonplussed by what happened to the twins at the end.  The story focuses primarily on their childhoods; as adults, they seem like strangers (to the reader, I mean).  I suppose their distance is partly an enforced one, as a result of what happened to them as children, but we don't really spend much time with them.  And then, without giving anything more away, the last thing that happens: what is that meant to mean - a sort of final tragedy?  I'm not sure how you can interpret it as anything else, but I found it difficult to see any way forward from there.  They have a terrible novel and then, as it were, the back cover of the book slams on their fingers on their way out.  It seems very harsh. 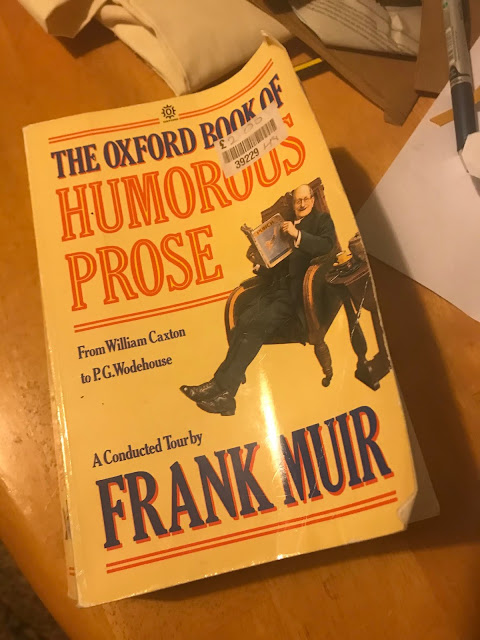