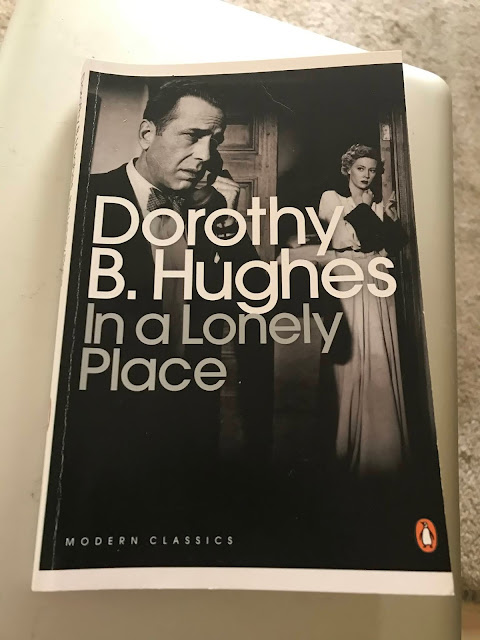 In A Lonely Place, by Dorothy B. Hughes, Penguin Classics (2010).
I am not usually a fan of thriller novels but this was recommended on Radio 4's 'A Good Read' programme, and I was persuaded to try it.  Having done so, I am still not a fan of thriller novels, but I have to admit, there was something completely, eerily gripping about the personality of the protagonist.
The story is about a guy called Dix Steele - ex-military - who moves to Los Angeles and eventually looks up an old friend from the forces who lives there.  The friend has joined the police and is involved in investigating a series of stranglings carried out in the area.  I don't think it's a spoiler (it's quite clear from the outset) that it is Steele who killing all these women.
It's not a gory book.  The ickiness, the tension, is around (a) whether he will be discovered, and (b) whether, as things start going wrong in the relationship he has with a women who lives in his apartment complex, and as the police start to get closer to him, he will kill again, as a sort of release; to clear his mind and get him back on track.
Steele has a lot of plates spinning at once - a lot of lies going on - which set me on edge right from the start.  Obviously, he lies about the murders, but also about the circumstances in which he came to live in the apartment, about writing a book, about having money - and, at a more basic level, his personality is a rather brittle facade.  Each of these lies begins to give as the story progresses.
I couldn't quite get to grips, either, with the way Steele accommodates his desire to kill within his personality.  It wasn't quite Jekyll & Hyde - he was not unaware of the murders he had committed, and he was clearly cautious when talking to his policeman friend.  On the other hand, it wasn't like he lived the reality of what he was every day either.  There was a kind of separation between the self that killed and the self that lounged around, pretending to be a writer whilst wining and dining glamorous women.  I have read somewhere that it is not unusual for serial killers to return to the scene of their crimes.  This guy has no interest in that at all.   Killing isn't some entire fantasy world that he lives in - it's just an instinct which arises intermittently, and delivers him a shot in the arm.
This is not a book for someone with anxiety issues - not because of the killing but because, as a reader, you're effectively paired up with Steele, sharing the way he analyses the other characters, scrutinising them for signs of suspicion, coldness, dislike.  Irrationally, I felt quite hurt when he sensed people withdrawing from him.
Another discomforting thing about Steele is his optimism.  In Andrew Solomon's book, The Noonday Demon, he suggests that one of the [few] redeeming features of depression is its realism.  When questioned following a test, depressive people showed a greater awareness of where they were likely to have gone wrong and what the outcome was likely to be, compared to non-depressives who frequently over-estimated how well they'd done.  I would put myself in the depressive-but-realistic camp.  Steele is definitely not depressive.  He has the kind of outlook that salesmen always seem to have (no offence) - a kind of impervious confidence in himself, regardless of what goes wrong.  He gets upset, dramatically tears a cheque to shreds, then the next minute he goes out to buy a new jacket and suddenly he's feeling good about himself again.
The book reminded me of Strangers on a Train, by Patricia Highsmith (another thriller I was fooled into reading by Harriet Gilbert!) - perhaps because it seems to come from a similar era, but also for the rootless, untethered personality of the killer. 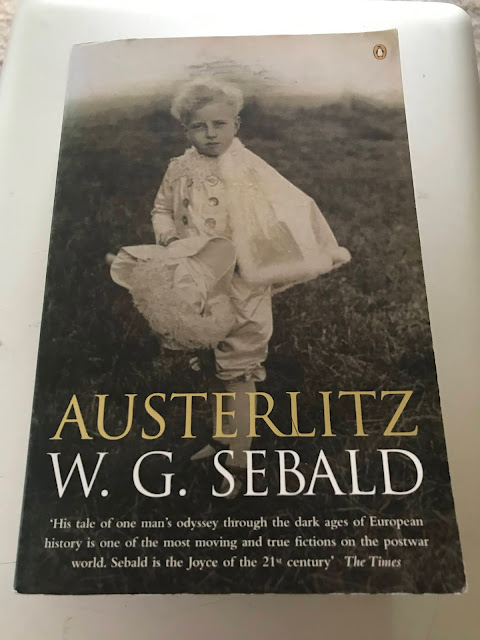 Austerlitz, by W. G. Sebald, Penguin Books (2002).
I really enjoyed this.  It is a very, very gentle, academically meditative book - a little bit like Gilead, by Marilynne Robinson - except that this is described more as a journey than as an event.  There are no chapters, no breaks - no paragraphs even - just a long narrative, with nothing particular to mark either the beginning or the end.  The sentence structure is long and meandering too - but not in a confused way; the effect is thoughtful.  For example, on p.202-3, 'I got the address of authorities who might be consulted in a case like mine from the embassy of the Czech Republic, and then, immediately after arriving at Ruzyne airport on a day which was much too bright, almost over-exposed, a day, said Austerlitz, when people looked as ill and grey as if they were all chronic smokers not far from death, I took a taxi to the Karmelitska in the Lesser Quarter, where the state archives are housed in a very peculiar building going far back in time if not even, like so much in the city of Prague, standing outside time altogether.'  I think what prevents this from being totally incomprehensible is the fact that that part of the sentence following the parenthesis is explicable without going back to see how the sentence began; the parentheses are long but you can safely lose track of them without losing the meaning.
The narrator in the story is an almost unimportant figure (male or female?) who meets a man called Austerlitz, and this is Austerlitz's story told by him but through the narrator (a sort of Dr Watson-Sherlock Holmes relationship), without the benefit of speech marks, so there are some strange features to it.  For example, he frequently says 'they said' (or something similar) twice - e.g. 'None the less, said Vera, Austerlitz continued, Maximilian did not...' (p.236)
Another strange but powerful feature is the photographs.  The book is full of photographs - mostly of buildings and landscapes, but occasionally of family members.  If the story is fiction, then who are the people in the photographs?  The cover photograph, in particular, of the austere, autocratic little boy with the blonde curls and satin cavalier outfit, becomes more and more gripping as the story goes on.
It's another book about the destruction and scattering of Jewish people in Eastern Europe from the 1930s.  Austerlitz is Czech and, at the age of four, was put by his mother on a train out of the country, just before the Nazis entered.  When he arrived in Britain, he was adopted by a Welsh minister and his wife, and had a somber, unhappy - if not materially deprived - childhood.  Of his past, he remembers nothing at all, and it is only much later on (in his fifties or sixties?) as he travels around studying the architecture which is his area of academic expertise, that he begins to acknowledge how little he knows of his past, and how certain things - places, sights, styles of architecture - seem familiar and invoke emotional responses in him, but he has no idea why.  So begins his search into the past, for his parents and the life they had before his evacuation.  As I said, there's no conclusive end to the story - but then, presumably that is the case for many people in his position.
I love history, and particularly tantalising is history which is just about accessible through memory - the memories of parents and grandparents.  I love books that, through the mining of such memories, seek to lay claim to ordinary people from the past.
When I was looking at our family genealogy, it was really exciting to discover that one branch were, in the nineteenth century, ordinary poor people in the East End of London.  'The poor' in English history are this enormous anonymous crowd, often referred to, and often demonised by contemporaries.  They're like a group of lost children among whom, to find your own, feels like you're putting right the wrongs of the past; reclaiming something; giving voice to people where none was heard before.
The situation of Jewish people in Europe in the 1930s feels like a particularly acute version of this.  I have read a few books recently about people discovering what happened to their relatives during the Second World War, and amid the stories of the terrible things that happened, there feels something quite salvational about descendants connecting with ancestors.  Even as a work of fiction, this book felt quite powerful.  I don't know what the story of the photographs is, but it feels like Sebald found a photograph of a little Jewish boy from Czech - one of these ancestral orphans that no one has yet laid claim to - and wrote a back story for him. 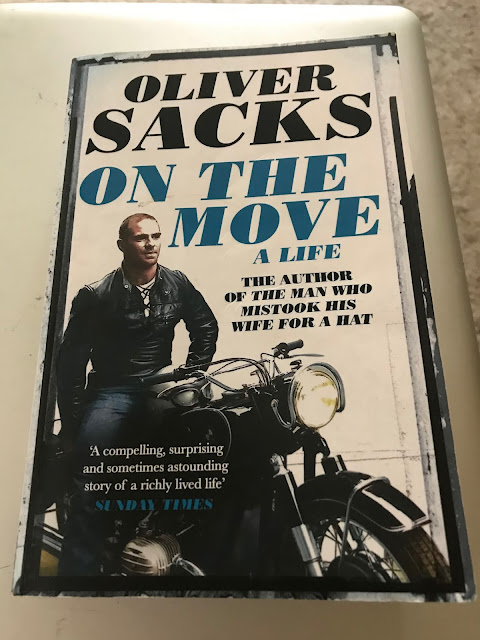