What do you do with stuff that doesn't quite work?

I'm the type of person who gets frustrated when things don't quite work out the way I planned, and once it's gone wrong, I prefer to get rid of it quickly - to dispose of the evidence - I guess so I'm not reminded of my failures every time I look at it. My mother - who is generally the first person I show new projects to - is the opposite way. If things go wrong, she will either unpick it and start again or, if that's not possible, she will try to make the best of it anyway or, if that's not possible, she will store it away somewhere in the hope that someday she will be able to use it for something.

We have some cracking arguments about this. She thinks it's a waste when I throw things out; I think it brings the general tone of the unit down to have things which are not quite right out on display.

My best example of this is a self-standing bear called Craig. I still have him, because I like him, and I think I should be able to correct his imperfections, but I only have to look at him to start steaming at the ears.

My biggest innovation with Craig was that he had pockets - not patch pockets, but slip pockets. I was quite proud of that, but they are really too small to make a feature out of: they look lumpy, rather than anything else, so they didn't really work. He also has a tail, although it's not quite in the right place, and it sticks out at an odd angle, and looks like something else entirely...

Anyway, that's far from being his biggest problem, believe it or not. Something went wrong when I jointed his legs, so one of them looks slightly cocked (or cock-eyed), and he stands with an overly-casual stance. 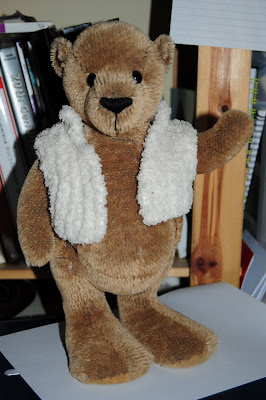 It is quite a sweet look - but the fact remains that it's not right. It was not intended to look like that, and anyone who makes bears themselves would look at him and think, 'Hmm, she hasn't quite got his joints straight'. On top of that, self-standing bears are difficult enough to display - what with people picking them up all the time. A bear whose legs are not quite straight stands no chance of retaining a vertical position.

So, he sits on the shelf at home, and I get annoyed every time I look at him.

Recently though, I have been starting to change my mind about throwing away things which don't turn out as they should (it's okay, it's probably just a phase I'm going through). I get 'crafter's block' (to coin a phrase) sometimes, and I look about and see either an untidy heap of bear-making stuff and other paraphanalia, or a clean, tidy, empty work space (it depends how far I've got with my filing). Neither scenario is particularly conducive to work. There's the ever-present heap of unfinished stuff, but that's the last thing that would persuade me to pick up the needle and get going again.

What does seem to act as a creative kick in the backside though, is something which is complete but imperfect - something which I can look at and know what I need to do to make it better. 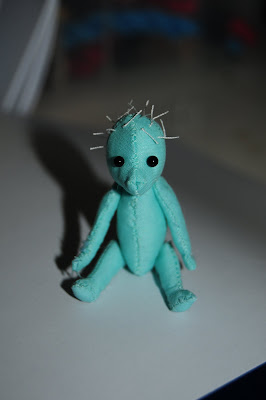 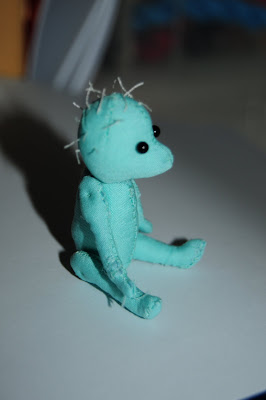 He was a complete failure - because the cotton kept fraying, so when I was sewing up the openings after stuffing him, I kept having to increase the size of the stitches, in order to secure the gaps. I like his look though, and looking at him sitting there - even with his terrible stitching - is making me think of ways to solve the problem.

Fray check would be the obvious answer, although it wouldn't completely solve the problem, since the cotton was quite loose weave, and the strands would start separating as soon as I'd poked it with the needle. So, a fabric with a tighter weave. I think much of the fraying occured when I was turning the pieces. I'm not the most delicate-fingered of people (to put it mildly), so I probably was not careful enough with the pieces. I was wondering though, whether it is possible to sew the pieces right side out - without ending up with raw edges on the outside. Could I ladder stitch the entire thing? Or failing that, perhaps start sewing wrong side out, but only sew along one side of, e.g. the arm, so it could be turned easily, and then I could ladder stitch the other side.

Hmmm, some experimentation is called for.
Posted by Ruth at 15:11