Well, so much for deadlines.

I have been struggling for the past few days with my welly-boot bear design. It was the third item on my list of things I wanted to do. After these bears, I have eight or nine items left on the list (including several big, jointed mohair bears), and only six days left in which to do them.

Ah well, I can extend the deadline, and maybe next time I'll be more realistic about it.

The welly-boot bear turned out to be more of a challenge than I had thought. I started out thinking that the boots ought to look as if they were made separately from the bear. I didn't want them to be removeable (which would be a disaster in my craft unit - I'd no doubt find a different bear wearing them every time I went in) but I wanted the top rim of the boot to be clear of the bear's leg (if you know what I mean).

So I started off drawing the design for the boot separately. It was a messy process though, and the more I thought about it, the more I realised it would just look untidy if the boot were separate. So eventually I gave up on separate boots, and started drawing the boot as part of the leg design, with only a switch in colours and a foam board insert in the foot to indicate wellingtons.

I was basing this bear on a previous design for an unjointed bear (unjointed apart from the head). I decided this time though that I would joint the arms. I also went for a different head design. I used the same head shape as this bear here, although it turned out quite different.

I also decided to use clear glass eyes for this bear. I have never used them before. I had always thought they were made out of clear glass so you could hand-paint them yourself, but I was looking through a book of antique bears recently, and found some pictures of old bears with clear, unpainted glass eyes. They actually look quite sweet and goofy! 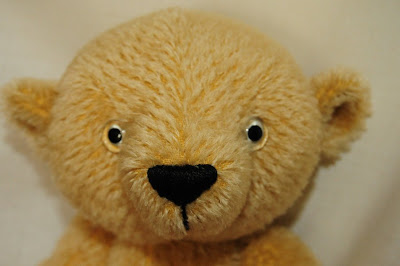 I think I may have said this before, but it's always a little shock to make a teddy bear, and then look into his eyes and think, "Eww! Who are you!?" I never start out with a clear idea of what I want the face, at least, to look like, so it does come as a bit of a surprise.

Then there's a getting-to-know-you kind of period where, with any luck, I shift from indifference to unabashed admiration. It's a bit of a dangerous way to work though: if I do come round to liking the bear, I can usually - by that time - overlook any flaws he might have. He's either fantastic or he's rubbish - I don't do well with the middle ground.

Anyway, I did have doubts about this one - and particularly about making six of them as I first intended - but I have gradually come to like him. Here are the other pics... 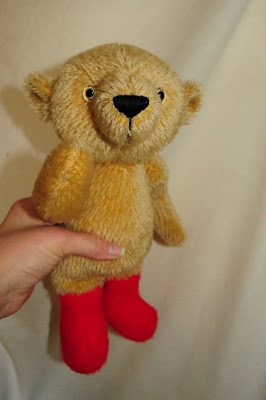 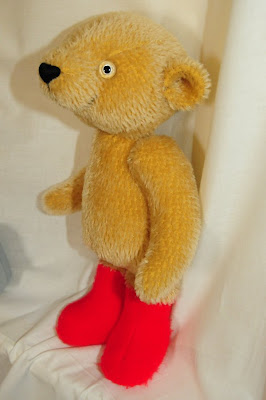 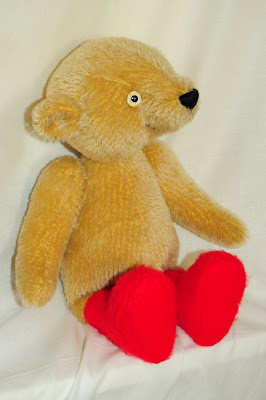 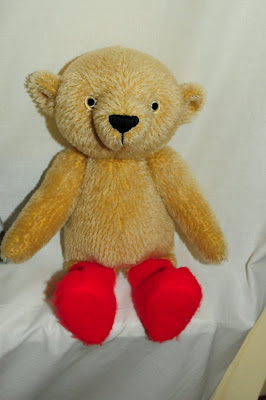 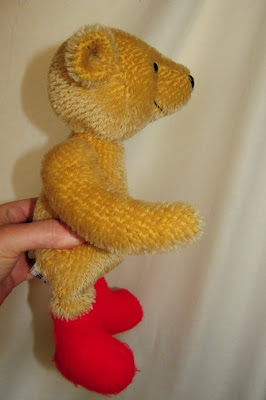 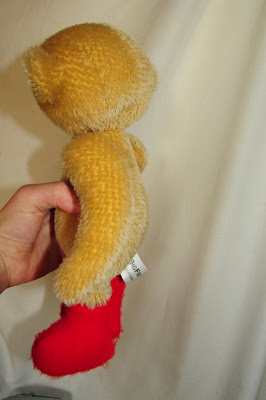 Note the tush tag! I got these printed ages ago, but it's the first time I've ever used them. I think it's probably placed a little low (and a little too diagonal), but I can amend the position on the other five bears.

The one problem with these bears is the boots. They are made out of red fleece, and it seems to be deteriorating before my eyes: they get hairier every time I look at them. I don't have any other plain red fabric though, and I don't think a cotton fabric would work very well anyway.

I showed him to my mother and, when I mentioned the boot problem, she just shrugged and said "He's just a bear with hairy boots". I'm still not sure whether I should use the fleece for the other bears. It is fully lined, so it should be alright, even if it continues to shed like that. It looks messy though.